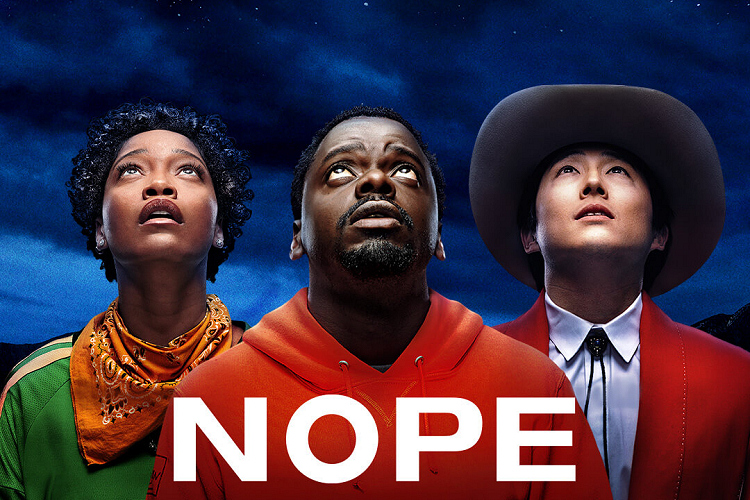 The muddled execution of Us didn't make me question what Jordan Peele could do next. He's only three films into his career, and doing all right for himself despite the divisiveness surrounding his last film. Still, with so little time to prepare my hype in these 'The Myans Were Wrong' times, Peele has regained stride from Get Out .

Generational family venture Haywood’s Hollywood Horses are falling on hard times. Despite their great-great-great grandfather Alistair E. Haywood's (based on a true story) debut as a Black horse jockey in the first ever moving picture, his descendants OJ (Daniel Kaluuya) and Emerald (Keke Palmer) struggle to keep their training ranch going after their father mysteriously dies from falling debris. As CGI becomes the standard and selling their own horses isn't sustainable, OJ and Emerald seemingly strike an opportunity to get the money shot of an alien-being lurking in the horizon. Meanwhile, just down the road, former child star Rick Park (Steven Yeun) buries a traumatic experience of his heyday into a Western-styled theme park and make his stardom rise with his own discovery.

What will it take for them to save themselves, to find relevance in an industry that's cast them out, to reconcile with their losses? The answer is not without a taste of a sublime yet violent showdown. From the opening title card, "Nahum 3:6: I will cast abominable filth upon you, make you vile, and make you a spectacle", the idea of a spectacle and the sacrifices (sometimes bloody, sometimes technological, sometimes blurring the line between predator versus prey or artist versus audience) is all over Nope.

Attention isn't always good - curiosity easily leads to voyeurism; voyeurism leads to exploitation; exploitation leads to punishment of sorts. As it becomes impossible for the characters to turn away from the thing in the sky, it's hard for us to do the same in the cinema itself. In this day and age, anyone can pull out their phone to make the TikTok rounds with a few swipes and a tap to publish. The thing in the sky is a thing to own, to control, to have for the characters' own gain. It's likely going to kill them but something that could set them up for life if they can outrun and outsmart it, and get it all on video.

Similarly, the characters themselves are exploited too. Alistair E. Haywood was essentially the star of a moving picture, yet all the credit goes to the guys who filmed and financed it. Ryan Park was cast as an adopted Asian child alongside a chimp in an all-white family, surviving a horrific production where one of the actor chimps attacks. He grows up essentially homogenizing his career in an industry that didn't utilize him as anything but an exotic trope. Now, generations down the road with OJ and Emerald, and Park as an adult, market their trauma in order to survive. Fiction like film has always been an escape from reality. Yet audiences usually felt a dissonance between what they experienced on screen to the real filming process. So many beloved classics have bloody stories staining their production - cutthroat tactics by directors, actors consumed with insecurities or personal ailments, stories that are ripped from the headlines. Yet the very horrors of these productions become commodified; the intrigue and lure of what went wrong almost usurps the quality of the films. Now, reality itself is vastly turning into a representation of fiction, where real human beings are viewed more like characters and snaps of life (where the truth can be misconstrued, theorized, broken down, etc.) is etched in digital-stone forever. Everything and anything can be twisted into a story ready for consumption, especially if the people involved are not in a position of power to tell their own stories.

Nope becomes the ultimate 'gaze' film. Eyes are said to be the windows of the soul. We can tell a lot by someone who can look us in the eyes as they talk to us or avoid our presence. One of the first things OJ tries to teach a crew on a Hollywood soundstage is not to look a horse in the eyes as its intimidating. The rest of the film presents a challenge to look or not to look; to question what we're seeing. Even the best way to survive the alien-being is not to look at it in the eye. Peele litters the film with other subtler details - round objects looking like dilated pupils; Rick's survival of a traumatic event rest on the bad miracle of not looking his attackers in the eyes; Keke Palmer's character sexual identity as a lesbian averts becoming a horror heroine men love to gaze over; OJ and Emerald show they have each other's backs by saying 'I see you'. Hell, Daniel Kaluuya's eyes gives some of the best performances most actors dream of giving because of what we can do with his gaze. It's only a matter of time, if OJ and Emerald are successful in their quest, that the eyes of the world will be upon them for what they achieved - something that nobody can erase.

The thing in the sky also camouflages itself as it needs to for the sake of the plot and as we the audience sees it, making it hard for us to not sit in awe or terror. Jean Jacket debuts as one with the clouds, appearing as another mere mysterious curiosity - much like a phantom of our childhoods that made us believe something was out there. Us humans cannot avoid itching that scratch of discovery, so gradually as OJ and Emerald seek to face off against their Goliath, the invisible-visible cloud morphs away from that iconic impression of a silver glistening UFO. It becomes God watching their every move; a capitalist chewing up people and spitting out money; a replica of Rick's cowboy hat, the lens of a camera as if to film its victims; a vacuum that squeezes and sucks the life out of its meals; it's an animal trying to sustain its own life. We're terrified of it but it's not exactly a villain, per say. The more OJ and Emerald strive to document Jean Jacket to save their ranch, the film explores the acts of exploitation to make a movie - everything between studios ruthlessly using and disposing of crew to get the impossible shot, how Hollywood has treated Black artists and people of color as props, exploiting a subject to make one's own career skyrocket. As OJ tries to understand the alien and train it, he becomes the Black cowboy Hollywood erased. The more Park treats it like a predator that can be tamed, the alien is also hunting them, letting Peele also reign in the idea of people demonizing animals for behaving naturally in man-made environments, and human's pension to try to control what can't be controlled. There is a food chain, figuratively and creatively, Peele seems to say, and we're all on the menu whether we are actively a participant or not.

Peele wanted to make the next Great American UFO story, and he does so in spades. We never know what we're going to get with his movies, but the cast absolutely shines. He also paces his script with humor, action, and horror as well as a Western without the typical white cowboy heroes. As many interpretations Peele weaves into the story, he's never too self-aware of his message and the analysis itself doesn't feel heavy-handed. It's quite easy to digest if you take apart it in pieces. I personally don't know why people are haranguing this as too complicated. I feel like this is the film movie buffs have been drooling to obsess over. Though he didn't quite disappear from Hollywood's radar, even during the COVID lockdown, this ultimately is his shot of re-writing, producing, filming, and directing back on top, and making the movie theater experience worth it again.