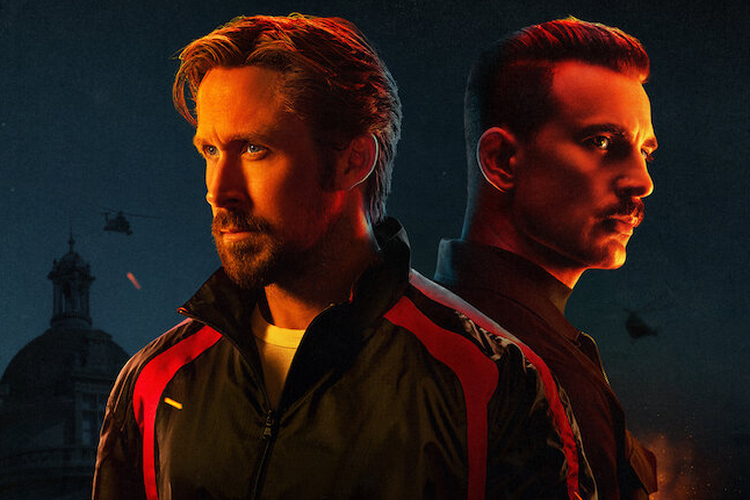 For the past four years I’ve been playing a torturous one-sided game of 'Where in the world is Ryan Gosling?' Without hesitation or any expectations, The Gray Man answered that question. And the answer is pretty much everywhere - Bangkok, Hong Kong, Croatia, Berlin, Florida. Despite the impressive array of settings for the Russos' latest Netflix project, and the streaming service making me wait two years for this with barely any promo tours of my baes Ryan and Chris...the film itself is spectacularly bland. Fun? Yes. But bland.
My long-awaited return of Gosling brings him to play a so-called violent prisoner picked up from the CIA to do their dirty work as Sierra Six aka American Bond. On a mission to kill another target, he realizes his time is up. A hotshot new director is hunting the agents in the shadows like Six ~for reasons~ and is forced to go on the run as a rogue assassin Lloyd Hansen (Chris Evans) guns him down.

Similar to so many spy capers from Mission : Impossible to the Bourne franchise, the plot inches our guy escaping one trap and showdown to another with relative ease. It’s been lathered up from other adaptations and basically rinses and repeats their formulas- the good guy is noble despite his pension for violence; there’s a young girl to tug his heartstrings and show us he's human; the villain is having a blast just blowing the shit out of everything in sight. But just because it’s been done before doesn’t mean it can’t be improved or modified.

The Russos, and their writing Marvel partners in crime Christopher Markus and Stephen McFeely, got the blockbuster budget to pull off big action stunts but they didn’t get the memo to focus on what they could do to make this spicier. If Top Gun: Maverick hadn't just been released, and impressively only employs a stunning action scene in the third act to blow every other movie out of the water this summer, The Gray Man would've fared better on my radar. But, ignoring its impact, and the influence of other flicks like John Wick, still would've done them and this a disservice. Because honestly, The Russos' approach to action is film it. Like the parking lot scene in Captain America: Civil War that is yes, very entertaining because of all of the superhero characters pitted against each other, but also a prime example of a fight scene without any real stakes involved - The Accords is a footnote in the battle between Stark and Rogers; there are supposed to be other Winter Soldiers out there but lol not really; and the Avengers team as a whole don't have any real beefs with each other - they're mostly kids caught between their parents divorce agreement. But I digress.

Filming an action scene just as it is...is kind of like the most basic thing you can do for an action movie these days. You could theoretically summarize Mad Max: Fury Road as a circus of desert dwellers just driving trucks back and forth. But it's criminal to leave it at that because George Miller's remake is also a stunning piece of action in its seismic editing and pacing, giving characters' connections, making mother nature a character in itself, creating a villain who feels like he has something to lose too (not just the heroes). The Gray Man has cool ideas and unique production designs set around Six executing numerous red shirts that are fun. Like it opens up with Six attempting to kill his target at a massive NYE gala, and the Russos deploy fireworks, and the crowd, and a random ass kid to make his set-up challenging...but the editing of multiple angles to see one punch or gun shot makes it difficult to see the stunts in full. The pacing is too plain and simple. Blink and its over before it starts. (They also employ a drone shot multiple times...and it's like they attached a Go-Pro to Batman...it does not make sense). The choreography and set-up to the action scenes are so smooth, there's nothing tangible or rarely makes us feel like Six is actually in harms way. You eat your popcorn; when one is over, you wait for the next one start.

Because of the genre's history, it's expected that most spies are going to MacGyver their way of out the corner they’re backed into but there’s not any breadcrumbs to follow here. There's no real intrigue in how The Gray Man is going to get from one place to another or hide out from all the other criminals hunting him down or anything. He just goes and does things, and you're like 'oh okay, it's that simple?'. You get snippets of supporting characters - Six's recruiter and father-like figure in Billy Bob Thorton; Six's right hand woman on the battlefield (Ana De Armas is wasted here); the CIA's new directors have messed up royally (Regé-Jean Page and Jessica Henwick ham it up as much as possible and they make it work). You also get snippets of challenges that are supposed to matter, but are quite forgettable by the end.

That lack of taking notes from more successful action films lends to the vanilla-ness of Gray Mans characterization. John Clancy and James Patterson esque novels are a dime a dozen. But they have millions of ardent fans, even casual ‘need to fill my time on a long fight’ readers, because they camouflage their tropes. Again, the screenwriters mostly went along with the flow for theirs. Six gets the broodiness of a tortured past and the heart to protect his recruiter's niece but as a spy he comes across as a normal guy so much it’s hard to believe he’s even a spy. There’s no real allure or swag. Gosling began his career as the tortured method artist, but thankfully veered out of developing the Jared Leto Complex. In the past several years, he’s been picking projects he enjoys. And, that works for him here. He wears the normalcy of Six well, killing targets like it's just another Thursday. But the skill Gray attained over the years makes it hard to believe why he’s so revered and feared. Newer or unfamiliar Gosling fans would not get the sense that he is stunning as The Driver in Drive, and that's quite the feat. But at the same time, it's like The Russos didn't say 'access a little of that darkness for us will you?'. He doesn't seem sociopathic in his own way, and his big backstory reveal is on par with Jon Voigt tearing down the IMF because of a mid-life crisis in the first Mission: Impossible. That absence of inner conflict - what could've been the breaking point to turn him into a Llloyd Hansen - would've been interesting...but he's more or less a propped up by minor characters as a reformed prisoner.

This is where Evans' trash stache and all, comes in. That boy was ready to chew up the scenery. And he does it exceedingly well. Again, there's no real backstory or development of Hansen. He's straight up nutso and knows it, relishes it, wants to eat popcorn, sit back and have a beer while he's blowing up the world. As much as I love Evans, I was worried a lot of....mannerisms would shine through or he would become a caricature. I, personally, think he has a habit of picking projects he's enthusiastic about, but then his personal anxiety sometimes interrupts his commitment to a character. He's always good and different in every single role, but there's something preventing him from going all the way. While Hansen mostly exclaims funny one liners, he never makes that the only thing about him. Evans sustains  comedic timing that hits at all the right moments and makes you want to see if there’s a method to Hansen's madness. He steals every scene he's in (excluding Dhanush) and is that element that would be missing if the film went with another villain.

Style makes for enjoyable popcorn flicks. Evans brings that to the table in spades. But the precision of Tom Cruise/Christopher McQuarrie’s work makes you feel the stakes involved. The Gray Man is a straight arrow through and through. But so is Cruise's Jack Reacher, who Christopher McQuarrie made threatening enough that you can always feel the calm before the storm when he strikes, even if he's just  trying to escape two bozos in a bathroom. It's choreographed to perfection, but it still comes across as tactile and imperfect and improvised on the spot, which is what The Gray Man is missing.  There's not a lot of tension in the action, and there's too much humor to discern if the movie even wants to be a spy thriller. At some point, Netflix and the Russos banked on Six versus Lloyd Hansen; the draw for audiences would be Gosling vs Evans. With that in mind, the film is...fine. It'll be something I put on when I'm at home working or cleaning or just want to daydream about my baes. It's okay to watch movies that you don't have to think about. On that note, it's falling perfectly in line with what Netflix has to offer these days.