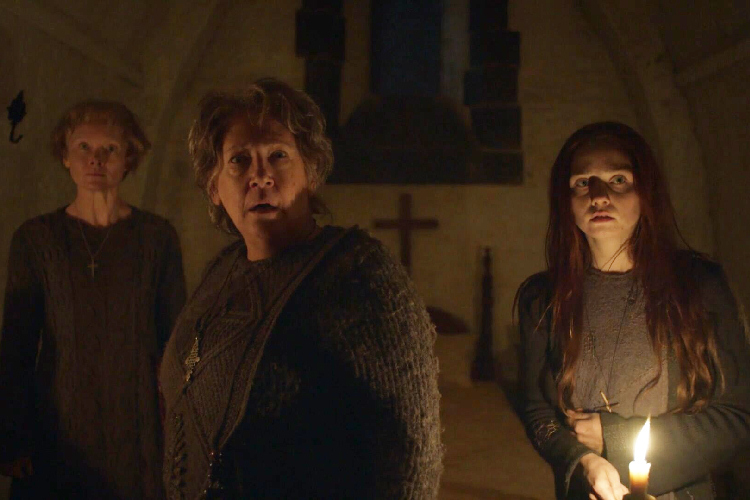 The stories we watch are just as influential as the stories – personal, religious, or otherwise, we tell ourselves. Here the lives of three women cast aside fantastically crossover to the blurred path of their personal histories and what the world would like them to believe.

Based on the novel by Marele Day, Father Ignatius (Sam Reid) seeks to examine the grounds of a secluded island and confronts three nuns living in a dilapidated monastery. As Ignatius discovers that hospitality comes at a price, the fears, faith, and secrets of Sister Iphigenia (Essie Davis), Sister Margarita (Ann Dowd), and Sister Carla (Ann Dowd) forces them to defend their way of life.


Sometimes a miniseries' episodes suffers from such an excess or lack of material that the actors get lost in the world-building or direction. With a unique and expansive concept unraveling twists at every turn, Lambs of God explodes out of the gate as an epic gothic tale. And then manages to subvert expectations and prove that some of the most unpredictable plots can come in small sizes.

At the heart of the series is the incredible performances by its leads playing Sister Iphigenia, Sister Margarita, Sister Carla, and Father Ignatius. The former worship Saint Agnes who gave her life to God, believing deceased sisters have been resurrected as their herd of lambs. Removed from modern society and living with archaic traditions, each of the women have their own form of eccentricity or instability, depending on what you initially believe. Iphigenia leads the charge in entrapping Ignatius in their altar and holding onto her home by any means necessary, Margarita believes she’s seeing demons, Carla walks a fine line between juvenile curiosity and wickedness. Armed with a different fragmented past about why the women joined the church, their lives unfold in flashbacks, delusions, and refashioned fairytales of their own personal experiences. As each are conflicted by their own choices, they walk a fine line between a judgement and salvation that cast on themselves or are thrusted onto them; convincing us that perhaps they’ve lost their humanity to madness or are on the cusp of redemption.

Though it’s difficult to spotlight one cast member over another, Reid’s performance as Ignatius stands out the most. From the second he steps on the grounds of the nuns’ home, Ignatius’s relationship with the women is strained. No man has ever stepped foot on their lands, and no man who has ever come in contact with them has done it for altruistic reasons. Teetering between compassion and torture, every episode unfolds with the hope and intrigue of him being set free or escaping. Without giving too much away, he too has a personal backstory that opens up the main plot to other threads and weaves the story farther and wider than one would dare expect. Reid reaches new levels of terror, confusion, empathy, and desperation in every episode as the leading counterparts equally give their all to terrorize as well as earn sympathy.

Beyond the series’ imaginative plot is a beautiful combination of production design, costume, and score. Without giving too much away, the mix of elements between the archaic ways the nuns live to the modern world, there’s a fully developed world that gives it the scale of a film in every episode. Though I haven’t read the book yet, and there are surely lots of details that can be found on the page with most adaptations, the scripts by Sarah Lambert work well to explore the characters with humanity instead of shock value or skimming details. The story is big enough on its own; it’s matched with direction of Jeffrey Walker who has a firm hand on every angle.

Lambs of God can’t be found guilty of not going all out in its storytelling and concept. As wild as the ups and downs are, the performances and world-building is woven together seamlessly to create a binge-worthy drama. The series' concept might be too much of a rollercoaster for its own good or to draw in some viewers. But for those who are looking for any original series that is an escape as well as a relevant reflection of the world we’re living in, it’d be hard to imagine this doesn’t fit the bill.


Rating: ★★1/2☆
Please Note: I was provided with a screener to watch this series and provide an honest review. Lambs of God is available to stream on Topic.
at May 07, 2020