Is It A Sequel?

When the origins of a superhero are released into one film, it's natural to assume that anything following that story is a sequel. But director Patty Jenkins set outs to break that tradition. Producer Charles Roven told Vulture that Jenkins was adamant Wonder Woman 1984 is apart of a much broader series instead of an installment in a cemented franchise. We will find out what Diana has been up to since we last saw her save humanity from the God of War Ares. But with the return of Chris Pine as Steve Trevor, it'll take time to adjust to the intended difference.

As far as we can tell in the trailer, Diana will face-off against two villains - Maxwell Lord and Barbra-Ann Minerva / Cheetah. Given that so many characters have a longstanding history with several different comic book series, it's likely that these two will be a combination of their printed versions.

Maxwell Lord is one of the greatest villains within the DC universe. In the Invasion series, Lord is gifted with the ability to control minds after aliens drop a gene bomb on Earth. He can telepathically influence people's minds, albeit with great difficulty. Primarily, he's an entrepreneur who gains intel on the Justice League by hijacking Bruce Wayne's satellite and implants humans with a virus to kill superheroes. At one point, Lord exudes complete authority over Superman, leaving Wonder Woman to walk into a trap to kill him and for it to be broadcast all over the world. Despite saving lives, it damages her reputation before she's able to recover. In a company-wide reboot, Lord was able to psychically persuade people to do his bidding with vocal commands, mostly helping them act out their subconscious thoughts. With information and the use of media in its infancy in the real 1984, Lord could be using his infomercials to control the masses, and inadvertently, draw Diana into his bid for infinite power.

Cheetah is also one of Wonder Woman's most popular sidekicks / villains. I believe the movie version will stem from the DC Rebirth saga. Archaeologist Barbra-Ann befriends Diana while growing obsessed with the divine, finding the lasso of truth, and the origins of the Amazons. However, instead of being tricked into a ritual for immortality and youth during a trek to a secret city in the DC Rebirth saga, I believe Barbra's origins will fall into the The New 52 saga where she cuts herself on a dangerous relic that is possessed by a Goddess of the Hunt with an Amazonian hive. And the injury makes her into a cheetah-human hybrid. Barbra's interest in Diana's origins will be a catalyst for her own transformation either from her own ambition to get closer to her or probably caught in the crossfires of Lord's own obsession with mysterious crystal sculpture.

We know that the movie is set 1984, and from the looks of some shop windows, it's also set around the 4th of July. But what's the cultural significance of the year? Maxwell Lord will likely be playing into the Big Brother aspect of the time period, using George Orwell's classic Nineteen Eighty-Four  to yield technology over Wonder Woman.

The early 80s cements the film's plot alongside the Cold War, where the United States believed Russia sought world domination through communism. Other significant events included Ronald Reagan becoming president, banks free-falling into a Post-Depression crisis, the AIDS virus was identified, and Margaret Thatcher won the general elections in the U.K. It's also possible we'll be seeing Diana exert influence over political events such as Watergate or at least come close to them as the opening of the trailer is set near the Watergate hotel.

Just when we think that Wonder Woman couldn't level up more than riding lightning bolts, she  acquires gold wings. While her traditional blue, gold, and red outfit appears in the trailer, the eagle-like armor definitely caught everyone's eyes. Stemming from DC Elseworlds story Kingdom Come, Wonder Woman removes the armor from her quarters when the Justice League faces an apocalyptic crisis - it's basically her biggest call to arms during a brink of war, and is a side of her that not even longtime ally Superman is comfortable seeing her use. Given Cheetah's abilities for superhuman strength and speed, Diana might be needing more protection against attacks.

Additionally, Hippolyta, Diana's mom and Queen of the Amazons, has her own version of the armor, which she uses in battle alongside Diana. In Wonder Woman, it's assumed that Diana can never return to her home of Themyscira. However, Wonder Woman 1984 is taking us back to paradise in what looks like an epic Olympic-esque battle. Given that this isn't technically a sequel, it's possible we might see Diana as a child obtaining the armor or at least seeing it in action and perhaps Aunt Antiope passing down to her. Or Diana, is just really good at metalwork.

Where is Etta Candy?

In the comic books, Etta's relationship to Wonder Woman and Steve Trevor is too long to encapsulate here - she was everything between a secretary to Steve to his girlfriend, as well as a sidekick to Diana during her adventures from Amazonian times to the present day. Etta was initially introduced in Wonder Woman, but has yet to be shown as anywhere near the plot or making-of for the second film. While it's expected that this won't be a sequel, it'll be a bit of a disappointment if she never returns in some capacity. 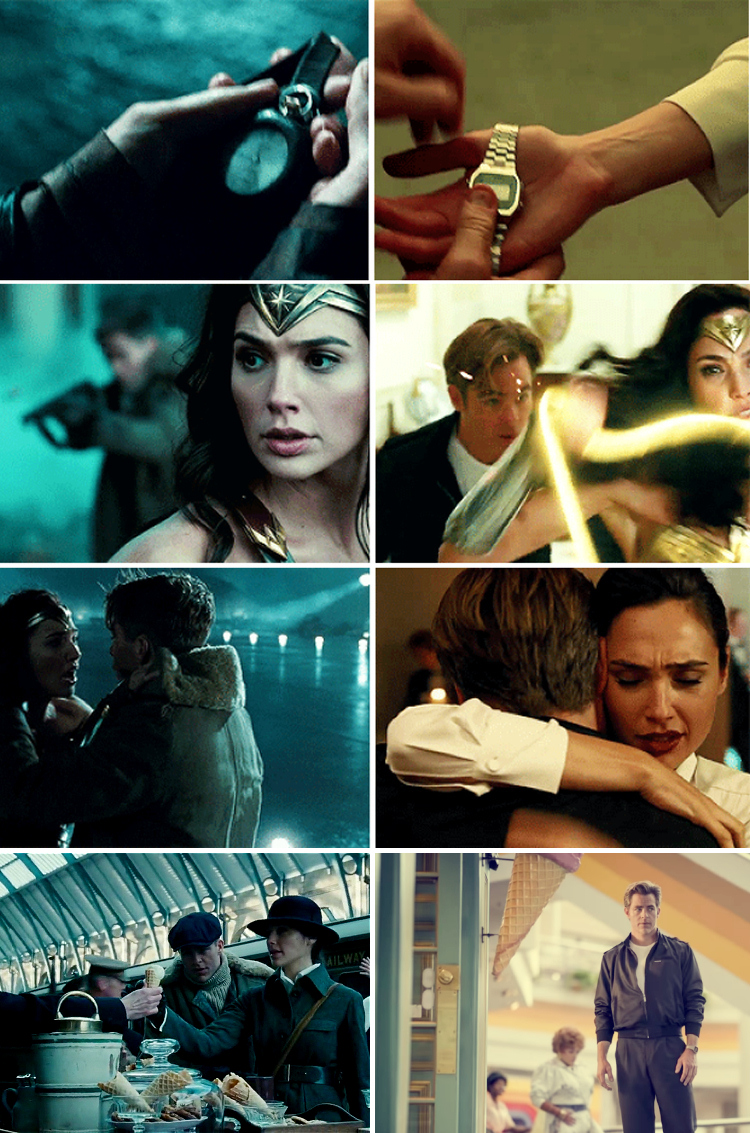 The last time we saw Steve Trevor, he was looking pretty dead. But Wonder Woman 1984 is bringing him back, fanny pack and all to rip our hearts out again. There's quite a few homages to their original allyship and romance from their combat styles to trying out ice cream for the first time. (We also have a bit of a Titanic moment with Diana visiting a place called Trevor Ranch.) As we can semi-see from the trailer, this is not the exact Steve Trevor we originally fell in love with. But we'll take him as he is anyways, won't we?

It's safe to say that everyone was anticipating for the trailer to be epic, but this might be one of the best-made trailers for comic book movies recently - next to Birds of Prey and Black Widow. The first look is a perfect combination of 80s nostalgia, the chemistry between Gal Gadot and Chris Pine, and just enough action with the villains to keep us wanting more. 2020 is going to be an exciting year for female-led franchises.