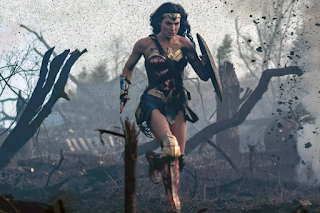 20 Scenes Why Gal Gadot Should Be Nominated for Best Actress

One of the biggest highlights in 2017 was Wonder Woman. After the studios had so little faith in her own solo movie, she was finally able to shield herself from an onslaught of low expectations, superficial backlash, and a crummy production to give female-driven movies a continued fighting chance.

It's hard to believe a movie like Wonder Woman - adventurous, romantic, funny, dramatic - took 72 years in the making. The culmination of her film's success - which includes breaking box office records - came to down to timing with director Patty Jenkins, screenplay by Allan Heinberg, and most importantly, its leading lady Gal Gadot. If the movie was rushed to rake in money or compete with other female-led superhero movies, WW could've been a complete disaster. Because Zak Snyder discovered Gal, and she stole the show in Batman Versus Superman: Dawn of Justice, this movie offered an incredible portrayal of the legendary character.