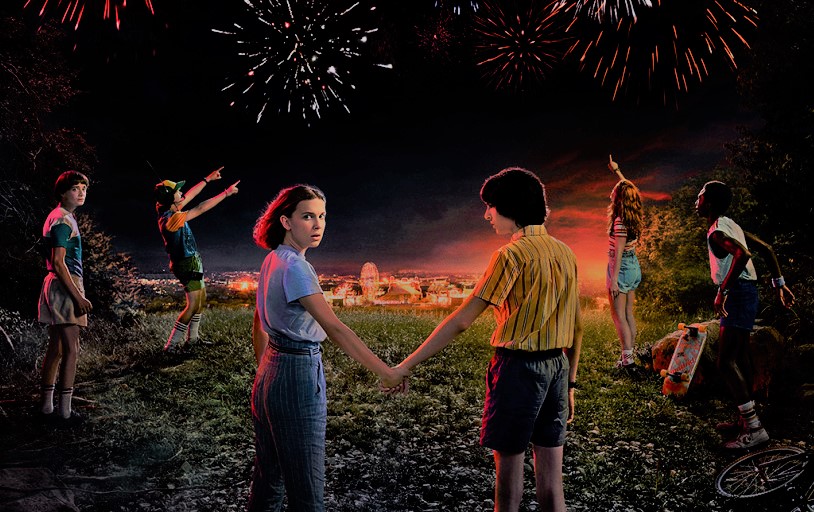 There’s just no avoiding Stranger Things. When a new season releases on Netflix, you run towards the Upside Down arms open – Mindflaying domination over Hawkins, Indiana be damned.

The third season of the popular series kicked off with another edition of Nancy Drew adventures for our heroic misfits: Steve, Robin, Erica, and Dustin investigate a mysterious code at the new Starcourt Mall. On the other side of town, Eleven with Mike, Lucas, and Will try to discover why the Upside Down is having a sadistic affect on Max's brother Billy. Meanwhile Nancy and Jonathan struggle with their new responsibilities after high school, as Joyce and Hopper discover that the Russians are coming (or have never truly left).

If that seems like a lot to read, it might not come as a surprise that it’s also a lot to digest while watching the newest episodes. As the third chapter in the Stranger Things saga, the series finds a balance in righting and recycling some of its previous flaws.

As a precaution, if you haven't seen Stranger Things 3, read at your own risk. This post contains spoilers!

While the first season hooked us with its combination of Steven Spielberg and Stephen King vibes, we now have two generations of Hawkins couples and friends learning to love each other at varying stages of relationships – the teens who think they know it all, the young adults navigating the real world, and the adults bottling their feelings to avoid reaching out. Individually, characters are also build more layers, mainly Eleven and Will who are still affected by the Upside Down. Recovering from the second season's awkward phase, the latest adventure smoothly explores the characters coming of age and struggling to act their own age. The core group – Will, Mike, Dustin, Eleven, Nancy, Lucas, Hopper, Joyce, Jonathan and Steve – has grown into a familiar family in an addictive story that knows how to create great character moments and make us laugh, cry, and cheer.

More than last season, newer characters are also handled better: Max becomes a confidante and stronger friend to Eleven, Murray turns out to be a real ally instead of a conspiracy nut, and Lucas’s sister Erica delights as an enthusiastic and clap-back-ready nerd. Billy, who was left to be eye-candy for the kids’ moms and a relentless bully, garners the "Steve treatment". By becoming a tortured conductor for all of the Mindflayer’s disgusting plans, we get to see another side to the lost teen inside scarred by loss and abuse. Where Noah Schnapp's performance stole the show in "Chapter 2", Dacre Montgomery’s transformation will also go down as one of the best in the series. A great new addition to the clan was made with Steve’s new clever, funny, bad-ass friend and co-worker Robin. Other great temporary characters included the sleazy mayor Larry Kline and the Cherry-slushie loving and former Russian engineer Alexei.

Once the characters are given their missions to explore the trail of literal exploding rats around Hawkins, the season goes full-throttle on the action and thrills. More or less, the third season becomes a 'love your favorite adventure' with five subplots encircling each other. One or a few of the stories might not work as seamless as the others (I personally loved the dynamics between Dustin, Robin, Erica, and Steve, but their quest dragged longer than it needed). The suspense, this time around, isn't centered on the audience figuring out the answers to things we didn't know, but waiting to see how the characters' discoveries come to a head. As a whole, the subplots aren't boring because the cast’s dynamics work well in making up for how the plot stretches itself out too thin.

Similar to the first two seasons, Stranger Things 3 has everything and thensome to set up the stakes: Russians, exploding rats, possessed old ladies, and a Mindflayer of humongous proportions. And yet as much as the world-building has grown, the series hasn’t exactly pinned its villains down. Even though the creators have a trio of evil culprits at their disposal, they feel flat both in human and creature form. The former are either emotionless soldiers or doctors or have their antagonistic tendencies redeemed to be a good guy in disguise, while the Mindflayer and demogorgons are scary but also just there. By now, the antagonists should feel less like strange things lurking in the shadows, especially heading into the fourth season. But unfortunately, there's nothing to feel or be engaged by who or what our clan still has to fight.

Unfortunately, this is where the show feels cyclical.

Since the beginning, the quest has centered around characters discovering something off-beat going on and eventually led to save all their battle energy for an explosive season finale. In between, relationships grow, but the action surrounding the characters follows the same formula. The fight between our favorites versus the Mindflayer or redshirts is always terrifying and bittersweet enough to hook us until next season, it's hard to ignore how the season set up its climax. Mainly, Eleven explores the Upside Down to learn intel on the creatures/missing people, she and her friends are trapped into protecting each other, a big battle ensues, and then led into a false sense of security of everything being okay again. While the investment for the heroes has been earned over and over, the threats against them aren't all that unique except for how the impressive stunts and special effects are pulled off.

In other areas of world-building, the series has grown more confident. As much as the characters have evolved, the  Duffer brothers know how to build anticipation and the palpable danger that surrounds them. Just when we think we know how the group will defend and protect each other, more misdirection and incredible timing with the editing throws our expectations out the window. Additionally, their use of the 80s time period fits seamlessly into the story. Similar to the iconic use of Joyce setting up Christmas lights in her house or walking through the Upside Down for the first time, this year had some incredible visuals with the Mindflayer. Beyond mere product placement, the set direction, costume design, and script weaves incredible references from films like Invasion of the Body Snatchers, Terminator, It, The Thing, and Day of the Dead. It's not only fun to discover easter eggs on your own, but also seek them out online or watch the season again and see what you miss.

After a tremendous debut, and a struggling sequel, Stranger Things 3 proves its strengths by building characters as they Nancy Drew their way through Hawkins and beyond. The latest chapter is filled with action, but also lets its stars shine as the group explores teenage love, adulthood, and parenting against a sci-back backdrop. With plenty of quirky, funny, and heartwarming pairings rotating the plot, it finally feels like the show has returned to its strangest and best roots.