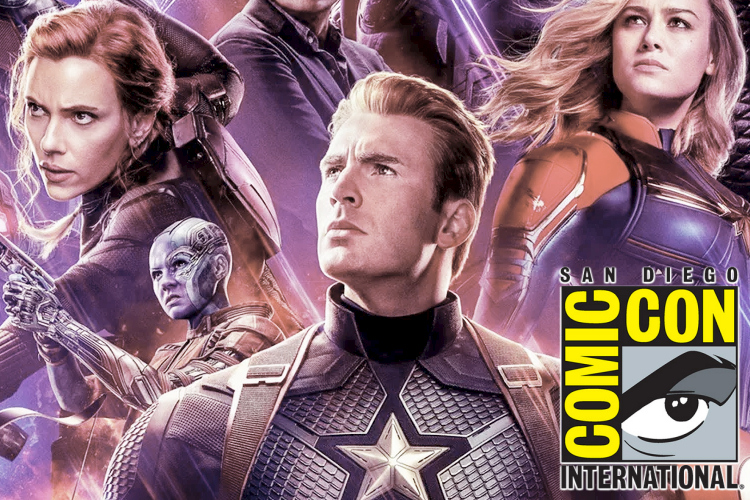 Behind The Scenes Trivia

Various fans asked questions about the making of their Marvel films so far, and the directors had some fun new trivia about the behind-the-scenes.

Who ruined the most takes? Mark Ruffalo and Anthony Mackie. Ruffalo gets caught up in the character and scene in the moment, while Mackie loves to crack jokes. Scarlett Johansson can nail a scene in one take.

Worst physicality for the actors? Chris Evans did most of his own stunts in The Winter Soldier and would go home most days pretty beat-up. Chris Hemsworth also hurt his back with the Fat Thor suit for Endgame, which was made of latex and weighed 90 lbs.

Biggest fight between the directors? Anthony and Joe agreed that they don't fight too often, but the last debate they had was about the length of Captain America's hair.

The Avengers Ask Their Own Questions

The Avengers cast was not able to attend the panel in person, but several members sent in their own fan-like videos relating to their own characters.

Paul Rudd asked about the best ass in the MCU: The fans decided via cheers and Chris Evans won hands-down.

Mark Ruffalo wondered with Hulk and Bruce Banner finally being at peace with each other, does that make him the biggest and smartest Avenger: The Russos answered that Shuri was definitely the smartest.

Chris Hemsworth teased about who will lead the Guardians of the Galaxy crew next, not really asking a question and forgetting Chris Pratt's character name Peter Quill.

Robert Downey Jr. wanted to know how the meaning behind Tony Stark's last words changed from his first to the last movie: The Russos said that he started out very selfish and egotistical, but becoming a father changed him to be selfless for others.

Chadwick Boseman sent in a video talking about starring in the Russo brothers next film 21 Bridges, which releases September 27th.

Christopher Markus and Stephen McFeely are stopping by our #SDCC later today bur during their panel they showed this #AvengersEndgame time heist map of where the stones were through the MCU timeline - but they didn’t know where the space stone would be in Captain Marvel. pic.twitter.com/2oolzuzRMP
— Screen Rant (@screenrant) July 19, 2019

ALL Those Draft Versions

Typical non comic book related movies undergo a series of revisions before they hit the screen. With an entire superhero universe to play with, Markus and McFeely had a field day of possibilities for the stories that would transpire in Infinity War and Endgame. Needless to say, a lot of plots ended up on the cutting room floor including:

Endgame has remained controversial since its release due to fans feeling like their favorite characters weren't treated the way they would've preferred. Among Natasha Romanoff, Steve Rogers, and Tony Stark, Thor's transformation from the buff pirate angel to drunk and overweight made fans feel like his grief wasn't taken seriously enough. Though his arc touched on his feelings of self-worth by not saving everyone he cares about and killing Thanos, a lot of audiences took the change in his character as a joke. Despite the obvious similarities between Thor and The Big Lebowski, the writers commented that Fat Thor was never meant to be a punchline, nor fatphobic, especially since no one encourages him to feel bad about his body image (except Rocket Raccoon).

Movies often film out-of-sequence, so the story we see on screen isn't created in-sync with the production schedule. Having remained the godfather of the Marvel franchise for the past twelve years, fans wondered what was Robert Downey Jr's last day on-set. Downey was one of the first actors to break the "no spoilers" rules and post throwbacks of his time filming Endgame. The Russos confirmed he wrapped after the scene Tony Stark declared "I Am Iron Man" and defeated Thanos. The moment provided a full-circle farewell in two unique ways: the scene was filmed next to the sound stage where he auditioned for the role, and Tony used the same dialogue in the first Iron Man film to arrogantly reveal his superhero persona to finally salvage the universe in Endgame.

There's no word yet on which scene Scarlett Johansson's wrapped playing Natasha Romanoff. There are rumors that Chris Evans's final scene takes place between Steve Rogers, Tony Stark, Hulk, and Scott Lang time traveling to 2012, but no confirmation has been made yet.

Peggy & Steve's Happily Ever After

Ever since Steve Rogers returned to the past and put the Infinity Stones back in their rightful place, the Marvel fandom has been going crazy about his ending: What happened to Peggy's life in the MCU? What did Cap do if the other Cap was in the ice? and the list goes on. Chris Evans also sent in a fan video asking what Cap would be up to after the movie ended. The Russo Brothers confirmed that Steve could've done anything he and Peggy wanted - save Bucky from Hydra, out Hydra in SHIELD, settle down and have a family with Peggy. Their interpretation confirmed their original thoughts that Cap returning to the past creates an alternative timeline. On the other hand, Markus and McFeely still believe that Steve created a closed time loop and what you see in the MCU from The Winter Soldier (Steve being the father to Peggy's kids) is what you get. Captain America's endgame remains a 'choose your own adventure' for fans.

So you want Thanos to go for the head?

Just when we thought the deaths in Infinity War couldn't have been more emotionally scarring, Markus and McFeely dropped a few startling bombshells. Two of the longtime Avengers in Endgame were supposed to undergo more trauma than what we saw in the official version. Tony's last speech was initially longer to draw out his death, but Downey thought Tony's last moments would have a bigger impact if he didn't say anything. And, Thanos was going to return to 2012, decapitate Steve Rogers, and then taunt Captain America in 2023 with his own head. The idea was cut as soon as it was considered. Let's consider that notion a slow writing day and thank the comic book gods who  spared us from any more feels than we needed to go through.
at July 19, 2019