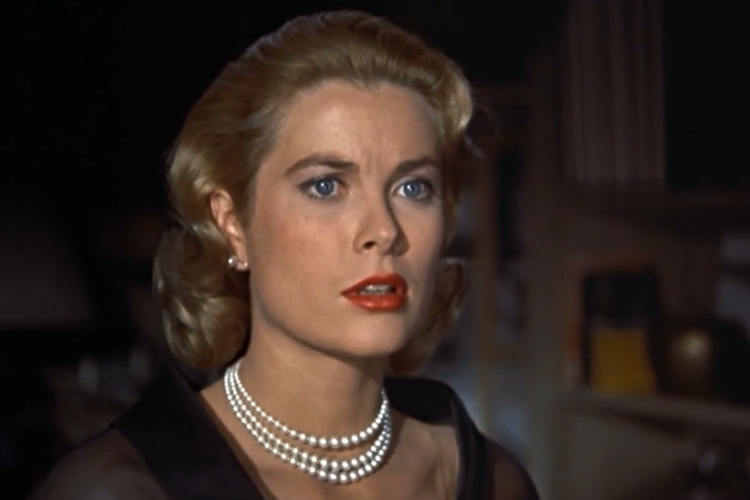 When one thinks about the intriguing elements of Alfred Hitchcock's filmography, the abundance of "icy blondes" he utilized throughout his career is hard to ignore. He worked with a myriad of starlets like Tippi Hedren, Janet Leigh, and Kim Novak, establishing them as femme fatales and victims on-screen. In celebrating Halloween by watching Rear Window, Grace Kelly's role as Lisa Freemont felt like a great character to highlight for my Wonder Women series.

Elegant and tenacious Grace Kelly dazzles in the classic thriller about an injured photographer L.B "Jeff" Jeffries (played by James Stewart) who's cocooned in his apartment and starts spying on his neighbors. Getting caught up in their own imaginations and theories, they suspect a grizzly murdered took place just across the street and try to prove their accusations to the authorities.

Throughout his career Hitchcock examined the themes of a seemingly perfect crime, and the morals that came along with the act in question. Like similar suspenseful films Marnie, Vertigo and Dial M for Murder, he also dabbled in the complications of marriage, singlehood, and the sexual tension between men and women. More prominently Rear Window, a tale of voyeurism and murder, offers a switch of gender roles where its independent and undaunted leading lady becomes the hero.

Spoilers for this movie are below - you've been warned!

One of the most successful elements of Rear Window is the chemistry between its stars - James Stewart and Grace Kelly. He's a little bit more rugged around the edges, while she's the epitome of the grace she became famous for. Their characters easily have an amicable, almost sweeping romance, but a major source of contention in their relationship is the differences in their work lives. Jeffries is always on the move as a photojournalist hiking in treacherous locations or putting himself in harm's way. Meanwhile, Freemont is a socialite / model. Everything she needs comes in her handbag, as Edith Head's costumes literally makes her a copy of a vintage Vogue cover. It doesn't seem like they're made for each other.

Her introduction in the film is an image of picture-perfection as she glides over Jeff while he's sleeping and planting a firm kiss. The close-up of her shows off her elegant make-up, coiffed blonde hair, a string of pearls, and little black/white dress. From Jeff's disgruntled responses towards Lisa's uncanny ability to be perfect all the time, a basic assumption is inferred to the audience of her femininity. Her dresses are fresh off the plane from Paris and she takes great care to have expensive catered meals delivered to Jeff's apartment. It's the very contrast of Jeff's on-the-run lifestyle road fulfilling dangerous assignments, eating fish heads on rice and staying warm at 20 degrees below 0. She's doing everything she can to please him (because she loves him), but he's not quite on the same commitment-plane as she is.

But Freemont's demeanor isn't exactly as heavenly or demure Hitchcock would like us to believe. During a conversation about their lifestyle differences, she gets caught up in her own point-of-view, hardly letting Jeff get a word in. And when he calls her on it, "I made a simple statement, a true statement, but I can back it up if you'll just shut up for a minute!", to which she spats back "If your opinion is as rude as your manner, I don't care to hear it." She can actually dish out as much as she can take.

Even though James Stewart and Grace Kelly have great chemistry together, the biggest downfall about their relationship is that Jeff just doesn't take her seriously. It'd be easy to point to the sexism of the 1950s at the time and assuage that this is something Hitchcock wanted to leak into the script, especially since he liked to push the parameters of censorship and social issues in his movies. However, it is a little disappointing that despite how independent Lisa is and clearly has an interest in being with Jeff, he believes so stubbornly that their lifestyles are too different, he has an air of superiority over her love and pursuit of fashion.

In terms of the actual mystery they're engrossed with, at first Lisa doesn't think Jeff is onto anything. He can't figure out how the wife of a neighbor left so quietly in the middle of a rainy night, and increasingly suspects she was killed by her husband. Echoing his candid nurse Stella, awesomely played by Thelma Ritter, Lisa thinks that he's letting curiosity and boredom get away from him, and shouldn't open up such a big fan of worms. Even though Jeff's landlady didn't let guests stay overnight, Lisa breaks the seemingly sex-deprived classes by using her sexuality. When Jeff won't stop his voyeurism towards his neighbors, she closes the blinds in his studio saying "The show's over for tonight", and exhibits a showy display in her lingerie instead ("A preview of coming attractions"). Her attempt with romance is quickly broken up when the entire apartment complex is called to the windows by the screams of another tenant who discovers her dog was murdered. And only one person didn't exhibit interest or concern: Mr. Thorwald. From then on, Freemont is deftly interested in what Jeff believes and starts to get in on proving him right.


Voicing her opinions is just the first way she starts getting involved in Jeff's theory. Increasingly, as their investigation goes on, her expert as a fashionista comes into play. Somewhat looked down upon because of her "feminine mind", it's Freemont's point-of-view that pokes holes into the police's theories. Mr. Thorwald explains that his wife's disappearance is due to taking a long trip out-of-town, but Lisa notices she left her favorite handbags and sentimental jewelry behind. Despite Detective Doyle and Jeff doubting her, she knows how to dress in the proper clothes, and the mystery woman Thorwald sent on a trip, "...couldn't be Mrs Thorwald or I don't know women."

In terms of her relationships with other female characters, that outspokenness shows up again when Jeff compares a ballerina's apartment across the courtyard as having similarities to Lisa's lifestyle. He often catches Miss Torso entertaining a lot of men, but Lisa points out that she's not in love with any of them i.e. Lisa is not in love with other men either, just one. Other women in the complex are also interesting in their own way from the glimpses we get of them. Lisa turns out to be right about Miss Torso - she isn't attracted to the magazine-ready studs and wolves but a shorter, frumpier soldier. Some of the other tenants include Miss Lonelyheart, a woman who almost commits suicide because of a string of disappointing suitors, and one newlywed wife who's always calling her husband back to bed. But Lisa's adventurous spirit mostly comes forward when she's joined by Stella to investigate more than Jeff can from his wheelchair.
After definitely agreeing that this woman is dead, Freemont declares, "I always wanted to meet Mrs Thorwald," so together they literally do all the dirty work. They venture down to the courtyard to dig up a garden and see if any body parts have been buried. Freemont also goes on a one-woman mission to startle Mr. Thorwald by leaving a threatening message Jeff penned, and even breaks into his apartment to find further evidence against him.

When Lisa breaks into Thorwald's apartment, it's hard not to notice some of the light nods of her personality, and romance with Jeff. The first time she pokes the bear, she's leaving a scathing note Jeff writes in order to get a reaction. When she comes back into their apartment just in the nick of time from being caught, she's exhilarated and wants to know what his reaction is; Jeff is almost beaming with pride. The next time, she actually breaks into Mr. T's apartment, climbing up the fire escape in one of her gorgeous gowns. Ironically, Jeff's non-committal feelings are given a nod as Lisa swipes a wedding ring from Thorwald. Though she gets caught by him and the police, it's interesting to see Jeff left helpless as Lisa takes the initiative - it's the very antithesis he expresses of them living life on the road together, that she would be helpless to the unpredictable dangers around them.

After all, it's really Freemont's actions, as dangerous and spontaneous as they may be, that makes Thorwald incriminate himself by attacking Jeff in his apartment. After all is said and done when he finally confesses, and Jeff breaks his other leg, Freemont continues to stay with him. Even though Freemont's wardrobe evolves from wearing couture to trousers and button-down blouse (considered atypically masculine at the time), her interests hasn't changed. The movie closes with her reading Beyond the High Himalayas, and when she notices Jeff is asleep, she picks up a Harpers Bazaar magazine instead - so she's spunky and tenacious never quite living up to Hitchcock's collection of icy blondes.

Based on Cornell Woolrich's short story It Had to Be Murder, it's difficult to believe that neither Stella nor Lisa are in the original version. Kelly, herself, certainly had the pick of tough projects to choose from when Rear Window came along. She turned down a pivotal role in On The Waterfront which became a staple for Marlon Brando and Eva Marie Saints' careers. But having released three other movies the same year as Rear Window in 1954, and later win an Oscar for The Country Girl, I can't say she chose too poorly. She definitely got the best of both worlds.