The time has finally arrived young Padawans! After months of the first teaser release, the Star Wars: The Last Jedi trailer dropped. As expected excitement for the eighth film, which will return to the Resistance's fight against the First Order, and Rey's ascent/descent with the force, was absolutely insane as we get a bigger idea of what's going to happen next.

Let's get straight into the new trailer! SPOILERS BEYOND THIS POINT

OMG, SO MANY THOUGHTS AND FEELINGS - WHERE DO WE START?

A lot of themes coming to a head from The Force Awakens. Like the beloved fifth movie in the series Empire Strikes Back, The Last Jedi is putting identity at the front of its lead characters. Rey and Kylo Ren are overcoming and handling their abilities with the Force, and their place in the universe as war breaks out around them. What are your first reactions? Feel free to share in the comments!

"Something inside me has always been there..."

Are Kylo Ren and Rey going to end up on opposite sides of the force? Is it wrong I think that would be kind of cool?? From the seventh movie, we didn't know a lot about Rey except that she's obviously powerful, and an orphan that was left behind on Jakku. She didn't want anything to do with finding Luke Skywalker's lightsaber and was pulled into the Resistance's fight against the First Order. Obviously, after the death of Han Solo, the friendships she made with Finn and co., pushed her to seek out Luke's guidance. His mentorship makes it difficult to believe she could end up on the dark side of the force, but maybe it will be something she can't resist.

Skywalker's reaction to her strength is indeed profound disalarm, making her extraordinary access to the force not the good thing we assumed it could be. If he pushes her away, this might be the prime opportunity for Supreme Leader Snoke to exploit Rey's abilities. Some fans are speculating he declares "Fulfill your destiny" to her instead of his protege Kylo. Will it backfire on him or work in his favor? Even though she's pursuing her journey, it's unclear what her destiny will ultimately be.

Both Snoke and Luke spoke about a "raw untamed power". Snoke was impressed with Ren, calling him something special. However, in contrast, Luke said that this strength he's seen before didn't scare him then (when he was his mentor) but it scares him now, referencing Rey's abilities beginning to show unwavering endurance.

In the biggest heartfelt moment of the trailer, his mother General Organa and Ren are feeling the force from opposite sides of conflict, and he looks to be questioning whether or not to shoot her ship down. Kylo's responsible for killing his dad Han Solo (or did Solo commit suicide), here he's shown having an emotional pull against killing his mother too. Is he capable of going through with it?

It's interesting to note that Kylo isn't wearing his helmet as much as he used to like in the previous film, essentially only revealing his face to two people: Rey and Han Solo. At the Star Wars's booth at San Diego Comic Con earlier this summer, it was revealed the reason behind Kylo wearing his mask is to conceal his identity as he delves deeper into darkness. In the trailer, we see him not wearing it when he's supposedly going to shoot down the ship his mother is on. One snippet even shows him smashing it into the wall. I don't think Kylo is going to be shielding his identity for much longer whether that means accepting his goodness or going full Granddaddy Vader.

This trailer has so many BIG moments, but the one at the end probably takes the cake. Rey is asking for help, someone to show her the way. Kylo offers extends his help and his hand, AND SHE TAKES IT. Let's breathe for a second....

Director Rian Johnson and many of the castmates, including Mark Hammil and Daisy Ridley, said this movie's going to take a lot of unexpected twists. The final scene is certainly a jaw-dropper, but is it real or a fake-out? Plenty of fans were calling the scene a fraud of sorts, given that the duo look like they're in different locations. Is it a flashback or a vision Rey has of who she doesn't want to become? Does Luke give up helping Rey and she turns to Kylo? Are they going to be neutral Jedis together, ones that aren't consumed or driven by either side of pure good or pure evil? They are both searching for meaning and understanding with what they're truly capable of. Perhaps turning to each other is one of the many unexpected places this installment is going to venture down.

This Is Her Movie


...besides all the other benefits of having a fantastic writer like Carrie there by my side while we’re making this movie, just having a voice that was like a compass needle that would always pull it back in the right direction of, This is what this character means and this is what we always have to make sure that she’s serving, with her strength and also with her weaknesses — showing a fully realized character who is going to be inspiring to the folks who grew up with Leia. (x)

Because this is the last time we will see Fisher embody this magnificent character, theories and rumors are and have been circulating this will be the mortal end for her fictional counterpart. I'm honestly not going to speculate too much on that. But, for fans who believe that this will happen, there's hope that she goes down fighting - something befitting the bad-ass warrior that she is. It's still hard to believe she's gone. We can all only hope that fitting closure is brought to both Leia and Fisher.

MY FEELS IN A NUTSHELL. GIVE ME A PORG TO ALONG WITH MY PYGMY PUFF

+ Rey gives Luke the lightsaber to the hand he lost from Empire Strikes Back.

+ Color palettes of white, red, and black are still perfectly linked to express Kylo's angry/light/darkness behavior, while earthy tones fit with Rey (after living on Jakku which was a desert wasteland)

+ We got a clip of Luke's robot arm pushing through a pile of rubble. Will we see flashbacks of Luke mentoring Kylo Ren?

+ Kylo Ren has his own Anakin inspired starfighter

+ The ancient books in Luke's cave might be The Journal of Whills, which is basically super fancy training via Yoda's master class of Jedi-dom. Will we see his ghost pop up to help Luke/Rey?

+ Finn has a massive showdown against Captain Phasma, which looks epic as hell. It's even better that John Boyega has suggested that we will learn more about his past.

+ Though we didn't get too much of him and Poe, we did see the fighter pilot calling on his fellow pilots to be the spark that burns down the First Order. Oscar Isaac shared that Poe is something like a surrogate son with Leia, something that we will see more of in this movie.

+ Where was Kelly Marie Tran? The young actress joined the cast earlier this spring at the Star Wars Celebration event. Introduced as a new character Rose, a part of the Resistance and working in maintenance, was already a huge hit with the fans, and it's a shame we didn't see her in the trailer.

+ We did not see some of the other castmates like Warwick Davis, Benicio Del Toro or Laura Dern, despite speculation we would've gotten a first look of them here. (We were also severely lacking on Domhnall Gleeson as General Hux too)

+ Tom Hardy will be making a cameo as a Stormtrooper, similar to Daniel Craig in The Force Awakens. Can't wait to see what scene he pops up in.

+ Check out the awesome character posters.

+ Did you get your tickets for opening weekend? My sister and I managed to snag a very late night pre-opening ticket, and plan on representing Kylo Ren watching over the theater as Matt the Radar Technician. 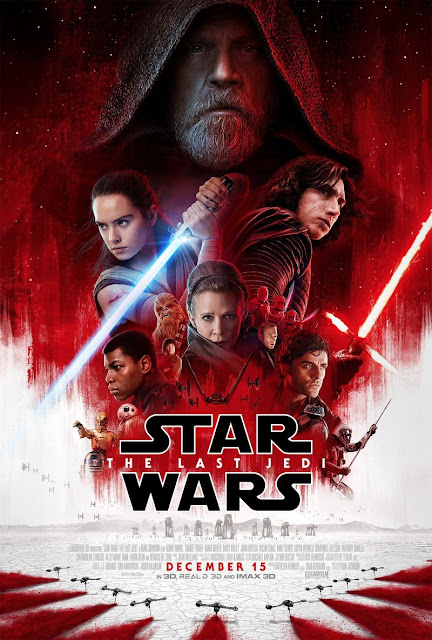