20 Favorite Episodes of The Walking Dead 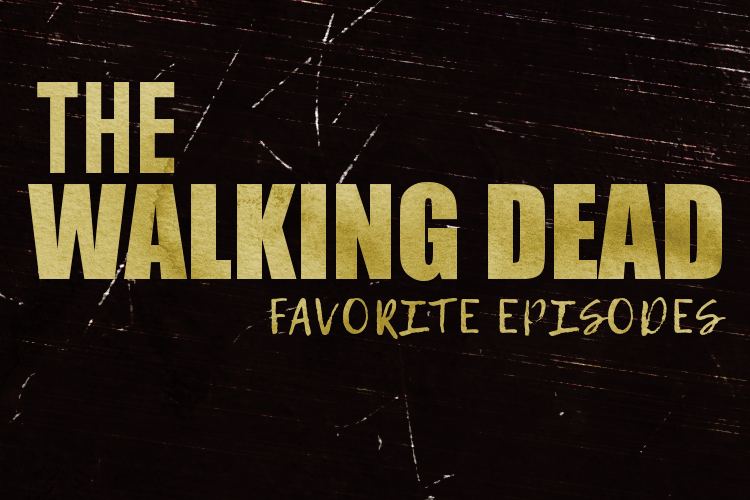 One of my all-time favorite shows The Walking Dead has hit its monumental 100th episode! For eight years, we've seen epic walker kills, learned how not to be walker bait, and witnessed beloved characters' deadly fates, surviving some of the worst a zombie apocalypse could deliver. After ranking my favorite seasons, quotes by the cast and Rick Grimes, Glenn Rhee moments, I thought it'd be a perfect time to cover myself in walker guts and go down a brutal memory lane.

In an effort to not repeat myself, some episodes are reserved for my favorite Rick-Grimes centered episodes, and there's probably a lot more I could give honorable mentions. But these are my top twenty favorites (so far). P.S. Reviews of the new season will be returning as a weekly feature on Wednesdays!

Happy 100th Episode The Walking Dead! (SPOILERS BELOW) What are your favorites? Let me know in the comments!

The Walking Dead knows how to create great, action-filled episodes. After teasing audiences with the Wolves throughout season five, everything hits the fans in JSS. Alexandria is attacked by this mysterious group, and again Carol goes on the hunt to protect everyone she loves. Season six is the start of breaking up the group again into different teams and times of day. After the quarry plan failed, it was exciting to see how and why thousands of walkers started roaming towards home.

Alexandria hasn't been working out for Rick since he first walked through the gates. While the group has tried to fit in with their roles, Rick's struggling to do things Deanna's way. Finally, the brutality he thinks he needs to implement in paradise comes to a head when Porch Dick attacks Reg. Seemingly, not all life is precious as Morgan would like to believe.

The First Day of the Rest of Your Life

Negan murdering Glenn and Abraham brought the series to an emotional halt at the start of the season seventh premiere. In the interm, Alexandria just managed to make an allegiance with the Garbage Folks, The Hilltop and King Ezekiel to bring down Negan when it all came down in another tragedy. Sasha, was one of my favorites. She always struggled with her mortality, so it was only fitting that she went out as the group's secret weapon to finally take down Negan once and for all. It's one of the best departures.

This episode might be too literal in symbolizing the show's title since they're literally just walking for the entire running time. But after losing their primary sources of hope (Bob, Beth, and Tyrese), Rick and the gang are left wandering on their own. The group interacts with each other a lot more out in the middle of nowhere eating roadkill and dealing with their grief than they do when they've settled into a community.

Following an epic season premiere, which showed Sherrif Rick Grimes waking up from a coma into the zombie apocalypse, he's rescued by a young man Glenn Rhee and is compelled to help a group of survivors. We get a taste of Officer Friendly and Not-So-Friendly as he deals with racist Merle Dixon and this new group works together to get back to their camp. This is the start of many episodes showing Grimes struggling with the new realities of law and order, and it has some of the best humorous moments of the whole series (before it did away with humor entirely).

After the group survives Terminus and are wondering what to do next, the whereabouts of Beth are finally discovered. She was taken from the cemetery with Daryl all the way back to a shady hospital in Atlanta. Crooked police run the joint using the old and injured as their wards, and Beth quickly catches on how this place operates. Raised by Herschel, trained by Daryl, but still has a heart of gold to help others escape.

The survivors facing what’s left of their humanity in season two is some of the best emotionally compelling moments of the series, despite fans always ragging on its slow-as-a-snail pace. After Nebraska, Rick, Herschel and Glenn bring back one of the abandoned stragglers but don’t know what do with him. They debate about leaving him out to die somewhere else and face the possibility of his goons coming to attack or executing him. It’s an interesting return to a time when they couldn’t trust strangers into the group, and only assumed the worst in everyone else.

Michonne and Rick are out scavenging for Negan, in what is possibly the best date night in the zombie apocalypse ever. The power couple come across an abandoned school and carnival, plenty of food and guns, and think killing walkers is all fun and games. It's a honeymoon-in-hell of sorts when a run-in with zombies makes them question their mortality and the very real risk of losing each other.

Season three built up the showdown between the Governor and Team Prison. Just when we thought maybe Phillip was down on his luck after Woodsbury had fallen, he drives up in a tank and an all-too-eager group ready to "take what's theirs". As tradition in Walking Dead history, nearly every sanctuary goes down in flames, and the prison is no different. Setting the group off in other directions (why didn't they have an escape plan or meeting place, I still don't know - not to mention Rick gives a speech about people changing after he just exiled Carol....), the prison, and the loss of Herschel, is still a memorable, devastating loss.

Start to Finish / No Way Out

The Walking Dead loves to toy with the timelines and separate characters, so it's surprising that two episodes gel perfectly back-to-back: Start To Finish and No Way Out. The plan to empty the quarry fails miserably, setting off a hoard of walkers towards Alexandria. Eventually as they break down one of the walls, characters are split up into different houses, playing with the anticipation of who is going to die and becoming more action-packed by the second. The episodes are capped off with a beautiful, simple parallel of the Grimes's family dynamics: a father pleading with his son to stay alive so he can give him a better life.

The hospital Beth was held captive at eventually takes Carol hostage after running her over with their car. Rick, Daryl, Tyrese, and Sasha make a plan to get them back, but Rick knows the exchange will go down with a body count. Still he tries Daryl's way to do it calmly. Ever a defender of the cinnamon roll Beth Greene, this was her swan song, and it was a bittersweet one at that.

This is such a great, less intense episode of what kind of leader Rick wanted to be in season two: fiercely protective of his family but also diplomatic. He and Glenn race into town to bring Herschel back to the barn when two stragglers come in and fish for information. Rick’s epic speeches about leadership cement the moment of Herschel entrusting Rick with his family's lives and the future they want to hold onto.

The group finds their first real sanctuary at the CDC, but after a celebratory night of hot showers and drinking wine, things aren't what they're cracked up to be. As the building's generator counts down to self-implosion, Rick scrambles to convince Jenner to set them free and try to survive in an explosive escape. Oh, how prophetic Jenner's parting words would be, from the loss of so many characters to all of the home-sweet-homes that were anything but.

At the end of season four, Team Family has to get the hell out of Terminus. From what we know about the joint, the inhabitants are pure cannibals, so there's not a whole of the season lot we want to see of survivors being cooked and eaten. While half of the group is held captive in one of the cable cars, the other half kicks ass and take names thanks to Super Carol coming in to save the day. It's pure action and anticipation from beginning to end.

The Walking Dead has established a lot of great female characters, but then struggles with everything from their development and relationships to other female characters to their merchandise. Taking two of its biggest leads Maggie  and Carol, and planting them in the heart of their newest enemies the Saviors, a variety of women get to show just how bad-ass they are. It was a long-awaited, rare women-centered episode of the series, and it was worth it.

There's a lot of catch-up to be had after the group finds each other again and escapes Terminus. But circumstances aren't on their side as Daryl and Carol try to track down the mystery assailants who captured Beth. Finally, we get an entire episode of these two connecting again about whom they are and are not trying to turn into, what it means to be alive for themselves and the rest of their family.

Season four separated all of our favorites after the prison was destroyed. In a surprise return, Carol teams up with Tyrese to take care of some youngin's Mika, Lizzie, and baby Judith. Carol's maternal instincts are called upon to make some heartbreaking decisions when Lizzie can't differentiate between walkers as humans, making her a threat to them all. Melissa has proven herself to be an outstanding actress throughout the series, and this is the start of one of the series' best performances.

The tension mounts on Herschel's barn as finding Sophia is proving to be fruitless. Shane grows increasingly out of control and frustrated as Rick handles Herschel's rules differently than he would. From Glenn's iconic outburst over breakfast about walkers being in the barn, to Shane unleashing all them from captivity to be slaughtered, Pretty Much Dead Already is some of the best action from season two. Shane's rant becomes a showstopper when everyone's intensity crumbles from an unexpected, horrible revelation.

Survivors from the prison's destruction are all sitting pretty wherever they may be. Rick, Carl, and Michonne are bouncing from house to house on their way to Terminus, when a vengeful group of strangers and an old friend try to attack them in the middle of the night. Like the papa bear he is, Rick will do anything to keep Carl to safe, and the results are pretty cut-throat. Surviving the midnight brawl isn't as great as it seems when they eventually come across Terminus, which isn't a sanctuary after all. 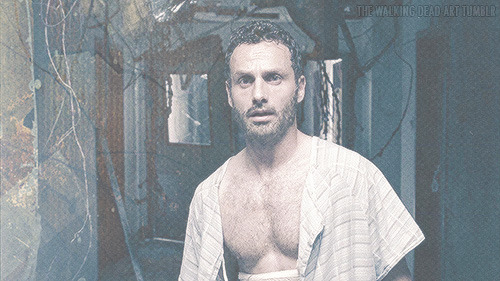 The episode that started it all Days Gone By gave us everything that we've been geeking out about for the past eight years. Rick wakes up from a coma into the pit of a zombie apocalypse. He set out on a quest to simply find his family, and once he has that, he and the rest of the survivors have to hold onto their humanity. It's the perfect set-up for an anti-hero and his comrades who's futures we come to watch for eight years, mourn and root for, agonize over, fear for, and love.
at October 22, 2017