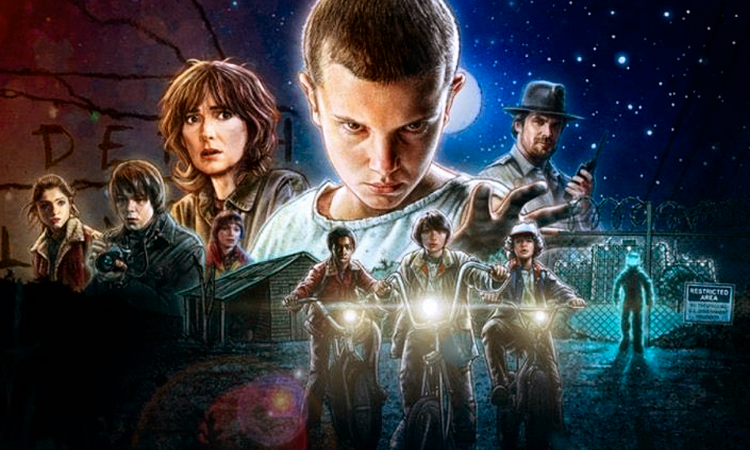 Plucking similar children from The Goonies and setting them into a conspiracy within The X-Files and E.T., Netflix's nostalgic series Stranger Things is out of this world.

When twelve-year-old Will Byer (Noah Schnapps) mysteriously vanishes, his pals try to find him by putting their D&D knowledge, walkie talkies, and bicycles to the test. As Will's mother (Winona Ryder) and the chief of police Jim Hopper (David Harbour) start their own investigation, a mysterious girl Eleven (Millie Bobby Brown) with supernatural powers may hold the answers about weird disturbances occurring in their small town.

While the show remarkably weaves together laughs and scares into the backdrop of an eighties sci-fi quest, the cast steals the show. To start with the kids as Mike (Finn Wolfhard), Lucas (Caleb McLaughlin) and Dustin (Gaten Matarazzo) who are Will's closest friends are refreshingly natural. It's been a while since I felt performances by child actors were animated as well as complex. The boys are so buoyant and full of personality. With Will out of the show 90% of the time, the actor/characters' bond restore the purest connection friends share: the loyalty, hope and trust it takes to be apart of a pack.

Distinguishing one role over another is a difficult task. Every actor is an essential part of the show, but when Millie Bobby Brown as Eleven enters the scene, hold onto your eggos! She is someone of a very few words and whose actions speak much louder. Her character's abilities make her powerful and mystifying, and Brown brings a true humanity as a secret weapon, eliciting a fierce and tender performance.

In a true feat of meta-casting, Winona Ryder is on hand as Will's mother Joyce. Though the notable actress didn't go into an official retirement, the eighties icon 'comes back' with a striking perseverance. As a hardworking outsider of their small town, Joyce becomes increasingly unraveled and determined to find her son. Managing the difficult task of being aware how family and strangers see her desperation, Ryder acts a fine line between fragility and unshakable determination. Some critics have written her performance as hysterical, but she undoubtedly is another bad-ass mama bear whose protective nature is as fierce as it is warm and endearing. Seeing Ryder again in any capacity is pure joy, and she doesn't disappoint here.

I would say the series is a character-led adventure with enough creepy atmospheric elements to keep their quest interesting as well as entertaining. Series creators The Duffer brothers found a magical recipe to create the hit of the summer: write characters inspired by Steven Spielberg's young-adult catalog who have big hearts and a bigger sense of wonder, and cast them in a suspenseful Stephen King-esque world. Their binge-worthy experiment oozes with scares, delights with nostalgia and provokes epic feels.

Perhaps their most impressive achievement is how the series lives as a tribute to the eighties pop culture the brothers loved growing up. Although the Duffers make a plethora of references of movies from yesteryear, their influences aren't flat and flashy. The attention to detail towards the cast, costume, set, music and cinematography feel like something straight out of the eighties instead of a one-dimensional homage. For some, the creators might've gone overboard. For someone like me who is mildly aware of iconic science-fiction and horror movies, the show balances old and new to avoid being boxed in by certain film elements it mirrors.

Stranger Things is a welcoming change from a pretty slumber summer within television, and even newly released movies. The series' eight episodes play out almost exactly as one epic vintage blockbuster and even eight individual ones. If you haven't watched it yet - curl up under some blankets. Be prepared to laugh, get scared, and believe the hype. Trust me. Friends don't lie.

Rating: ★★★
Have you watched Stranger Things? What are your thoughts?
at September 03, 2016