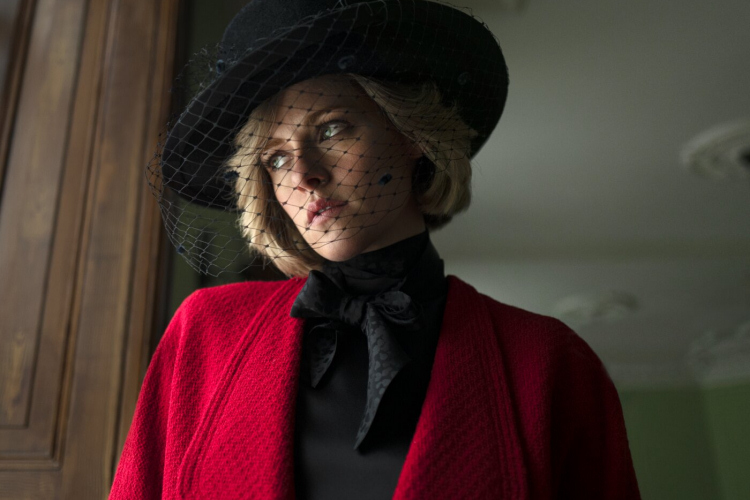 The world knows everything there is to know about Princess Diana. Hollywood has certainly exhibited its fair share of arthouse films and hot-gossip biopics of her life to have all of the bases covered. Where could another movie delve into that hasn't been explored before? Enter: Pablo Larrain, who does not settle for a paint-by-numbers biopic and goes all out with a psychological mindfuck.

Set during the weekend of December 1991, the British Royal family is spending the Christmas holidays at the Queen's Sandringham Estate in Norfolk. Instead of bucking to the traditions of showing up on time, weighing-in on arrival, and hunting escapades, Diana becomes consumed with the image of herself - in the mirror, all the ways the house hears and sees her every move, what the world will think of her in the future - and trying to break free from it.

Where his former biopic Jackie is a spiritual monument to American royalty, here Diana eats her giants pearls for dinner, convinced Anne Boleyn is sending her messages from the beyond, and breaks into her dilapidated childhood home to say goodbye for good. This is far from a dysfunctional-family drama, even a royal one; it's a gothic-esque horror with Johnny Greenwood's haunting score, and Claire Mathon's claustrophobic cinematography. Rarely is there a moment where any interaction Diana has doesn't pivot close to Kristen Stewart like you're climbing the walls with her or towards the house staff  conversing with the ghostly bartenders in The Shining - eery one-on-one probing interrogations and endless heresy. There isn't a second that this movie doesn't let up with Diana's tribulations and what she needs to shed before the weekend is over - her royal responsibilities, the ghosts of her past, any vague prophecies she thinks the world will have of her.

All of this certainly feels like a hefty subject matter, and for bigger Diana fans, they will automatically try to carry the burden that she had to. However, as much as the film is a visceral cinematic treat, I also found it lacking in its effectiveness to make me lose myself in the story. With Jackie, Larrain was both bold and subtle in its symbolism; there was a drive for Jackie Onassis to enshrine John F. Kennedy's legacy into his funeral, to not leave the White House quietly in the night like the Johnson administration wanted her to - but with a bang. And, her decisions to do so, losing Jack and their hot' n cold marriage played into that all-consuming grief. For Spencer, the plot is very much static - almost too much. There's symbolism, there's intense isolation and paranoia, there are plays on imagery and what is reality vs Diana's imagination. The film opens as a "fable based on a true tragedy" and drops the audience into her nervousness right off the bat. As the running time goes on though, it doesn't necessarily capitalize more on fictionalizing the facts to create tension or drive a palpable unease in the script. Maybe because Diana has had more than her fair share of B-list drama and lies surrounding her name, the film veered away from that. But I kept wanting "more" I can't put my finger on - more stakes placed on Diana and her breakdown/breakthrough, tension with Queen Elizabeth and Prince Charles or the new Equerry Major, less of a carousel of symbolism to carry me to the end. Something to give me more than Stewart's performance to go on.

Understandably, Stewart is one of - if not the - front runner for the upcoming Oscars season, and for good reason. The film leans on her to bring us into the surrealist fold of Diana's life and that specific weekend. And, she does so by achieving what so many in biopics who have won Oscars has achieved - capturing the likeness to a tee that it makes you forget and at times remember this isn't the real person - it's an actor. But, it's also not enough for me to confidently say she carries the film on her own. Around the half-way mark, the story and performance trying not to to summarize her life as the tragic princess by fictionalizing a lot of the tragedy...just felt like her portrayal was going around in circles. (Sean Harris's stern yet tender performance as the royal head chef and Sally Hawkins as her dresser stood out to me portraying the commonfolk rooting for Diana to survive the royal circus. But the supporting cast isn't featured enough to be an ensemble).

When Diana's liberation to reclaim her name arrives, the ending is an earned wish-fulfillment of a future she struggled to achieve. I understood everything that was conveyed, but that catharsis didn't burrow itself as deeply for me as it has with many critics and admirers. I'll revisit this in the upcoming months and years to see if another viewing will change my mind - I'm open to it. Vague familiarity with the real events is suitable for anyone who wants to see this, but fans with advanced degrees in all things Diana will walk away the most satisfied with this refreshing arthouse take.