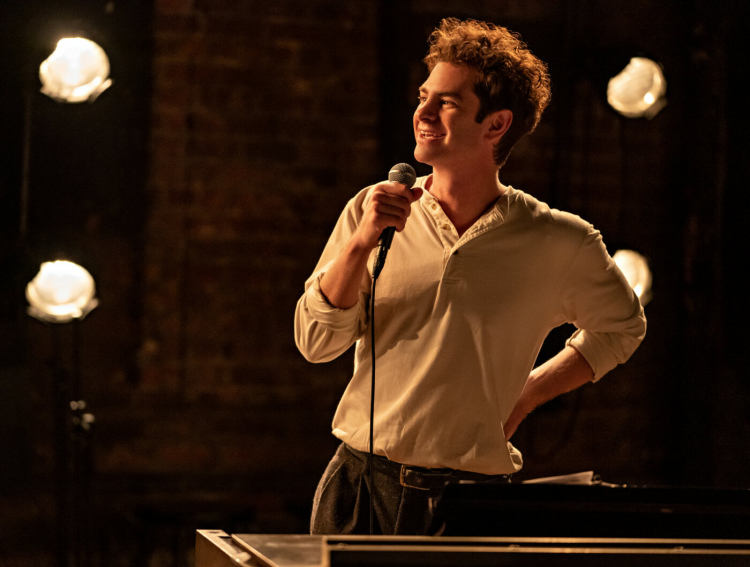 Even though I'm a musical nerd, I've never been an avid Rent fan. #blasphemy However, I am Lin-Manuel Miranda trash, so the two was easily a mixed bag to convince me to watch. Like it or not, he's doing things with musicals across every medium that just isn't being achieved by one person. And that is both a good and bad thing.

The level of creativity in lyricism and storytelling explodes from his mind at a frenetic unmatched pace, but that doesn't always spell 'accessible' to most audiences especially when it comes to musicals (an already divisive genre). For his directorial debut, the story of Jonathan Larson's (Andrew Garfield) life is right up his alley. He filters the composer's creativity as he tortures himself to produce his breakthrough Broadway show (a couple of years before Rent) and the sacrifice of never giving up on his dream even if it means paying a significant price to make it come true.

As a musical first, it works. Miranda provides a wealth of inner-genre homages and styles that helps Andrew Garfield go balls-to-the-walls in a performance that...nobody probably expected to pour out of him. For Miranda's first step behind the camera, it doesn't surprise me that he wants to maximize his experience from the stage. Throughout most of the film, I was awed by his sheer imagination to transform songs in a multitude of ways most would never dream to string together.

But as a film told part flashback, part-prophecy of the now-recognized genius, the plot plods along from one musical sequence to another that makes Larson range from a destitute artist to insufferable know-it-all as the world and his friends struggle as much, if not more than him. The story holds the promise of what it means for creative types to never give up because one day that dedication above all else will be worth it, but other than that, it's tough to see the forest from the trees several pivotal moments of his personal arc. Garfield commands the role effortlessly, balancing a breakdown of his character's own journey and the journey itself - it might be one of his best yet. Somehow, he doesn't let Miranda's complex vision drown him out and instead leads the parade to make Larson's workaholism as heart-racking as possible.

However, couple a character that's not the most likable with occasional confusing, occasional brilliant staging and editing choices that simply needs more restraint, tick, tick...BOOM!'s build-up to the spark of inspiration for Rent doesn't feel as contextually layered as the film leads on. Some elements that work on stage might not work on film and vice versa - it's still a lesson that most adaptations or musicals need to accept. Of Miranda's works so far, that also split audiences between musicals versus their subjects, tick, tick...BOOM! will primarily pack a punch for the theatre kids crowd. Even this one.

Rest in peace, Stephen Sondheim. Thank you for way too many 3 am nights where I should've been studying but was listening to your work and pretending I was on stage in my bedroom instead.