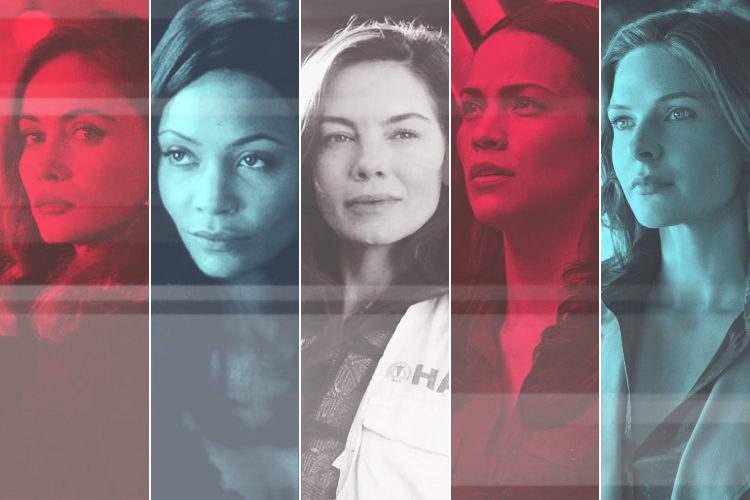 If Ethan Hunt is considered the quintessential American spy opposite MI6 British royalty James Bond, then his female counterparts are presumably bad-asses in their own right. Throughout the Mission: Impossible franchise led by Tom Cruise, Hunt's squad has offered actresses a wide range of love interests and agents. With the series's sixth installment Fallout hitting theaters, I thought it was about time to take a look at how the women fare throughout the franchise. Here's another edition of Wonder Women featuring Mission: Impossible. (Note: this list is in chronological order of the movies' release date and contains spoilers). Which is your favorite Mission: Impossible female character? Feel free to let me know in the comments!

To be honest, it's difficult to single out any of the ladies in the first movie. Mission: Impossible solely focuses on introducing Ethan Hunt and a mission that literally blows up in his face. A the two central female characters throughout the first movie, Emmanuelle Beart as Claire Phillips and Vanessa Redgrave as Max are memorable but not given deep character arcs or motivations.

After Hunt thinks he's the only agent left alive in an ambush that left his entire team dead, Phillips shows up having inexplicably escaped the death toll piled against them, which included her husband. Keeping her cards close to the chest, she's not entirely trustworthy - how is she and Hunt the only ones left alive? When she joins him to find out what happened, you don't truly know what's up her sleeve until the twist that her and her husband were responsible for taking Hunt down. Beart is simply stunning playing both sides of the mission, even if she isn't given a lot to do except wait for her true intentions to be revealed.

Max, on the other hand, is an arms dealer who feeds Ethan info about who killed his fellow agents. She has nothing on her mind except getting what she wants and making money; her job is purely what she can gain from it, which is refreshing. In what is usually a role for a male actor, it's wonderful to see a woman play someone in power who forces the protagonist to make his first move.

*Kristin Scott Thomas and Ingeborga Dapkūnaitė's characters are two of the five team members who are killed in the first mission along with Emilio Estevev, so there's not a whole lot to describe them except that Hunt's peers were made up of both men and women equally (instead of a male-dominated group we often see in action movies), and they were competent agents ready to get their mission done before they were killed.

After the Mission Impossible, its sequel makes an unexpected change with a "love" triangle. Nyah (Thandie Newton), a thief, is brought into the crossfire when Hunt asks her to reunite with ex-boyfriend and rogue IMF agent Sean Ambrose to stop him from selling a deadly virus to the highest bidder. Newton is quite possibly the sassiest female character of the entire Mission: Impossible series, but no matter how much I love her (or perhaps its Thandie Newton more than the character), she eventually falls into the damsel pit. Both men fight over her to the point that she injects herself with the priceless poison and Hunt has to rescue her from dying; she doesn't steal anything and get away with it either (except if you count Hunt's heart). However, her and Cruise's chemistry is wonderful, and she brings a real electric energy to the series. When Nyah's given the chance to show what she can do, she's sly and clever; but it doesn't change the fact that unlike all the other female characters in this series, she's brought onto the mission purely to sleep with Ambrose and get intel for the mission.

Similar to 007's series, some actresses only make appearances in one film overall. Many claim it's the typical Hollywood revolving door of hotter, younger actresses lined up to star against an older male lead. However, Newton was the first of a few actresses who were supposed to be in additional installments but had to drop out due to scheduling conflicts - the other two are Maggie Q and Paula Patton. As much as I don't mind Hunt moving on with his love life, it's still a shame that Nyah couldn't be in more than one film.

A few years after Mission Impossible II, Ethan's fallen in love with a nurse Julia (Michelle Monaghan) who is unaware of what his real job is;  they're ready to get married and settle down. Of course, as he's trying to take a break, his protege Lindsey Ferris (Keri Russell) is captured and killed (but gives the most epic shots ever in the MI franchise) via a mysterious implant in her brain. His mission to find out who is responsible only gets more personal when his fiance is taken hostage. Though Julia spends most of her time kidnapped, she does have opportunities to prove how bad-ass she is. When Ethan's is injected with a detonator in his brain, she has to shock him back to life and protect his unconscious body by shooting down the villain's henchmen. Michelle does a wonderful job covering for what probably would've been Thandie's role; she's down-to-earth, funny, and resilient, even though she's mostly kept out of the loop of Ethan's alternative lifestyle.

She's the first actress to return to a sequel in Ghost Protocol. In the fourth installment, we discover that between the two movies, Ethan with the IMF conspired to make it look like Julia died so she could go into a witness protection program and gain protection by those who wanted to use her against Ethan. The dissolution of their marriage is inadvertently a great moment for both of them; it drives Ethan's guilt in the sixth film Fallout about having ruined her life by making her go into hiding; ultimately, they make peace with the past because Julia knows she's become a resilient survivor.

* Maggie Q also plays a small role as Zhen Lei in Mission Impossible 3, a member of Ethan's team, but like other agents brought in to help Hunt like Jonathan Rhys Myers, their roles aren't deeply developed. It would've been nice to see what they would've done with her role if she could've continued in the next movie.

Jane Carter (Paula Patton) is the first female agent to get her due in Ghost Protocol. While she and her crew are tasked to  acquire nuclear launch codes, her romantic partner and fellow agent is assassinated. After assisting Hunt out of a Moscow prison, Hunt with Carter, Benji (Simon Pegg), and Brandt (Jeremy Renner) race to complete their mission as the IMF has been disbanded.

As much as I love Ilsa from Rogue Nation, it's disappointing how much fans of action movies and MI overlook Patton. Carter's decisive, gutsy, and steadfast. She has plenty of scenes that show she's 'one of the boys' but also a layered character in her own right emotionally and physically; she's the one holding up Brandt and Hunt when he falls out of the Dubai building; her fight scene against Sabine (who is unfortunately a basic villain with not a lot going on) is no-holds-barred; when she has to flirt with an entrepreneur to get override codes for a Soviet satellite, she knows how to be sexy but it's not her greatest skill as say putting a guy in a sleeper hold. She might've lost the love of her life, but that doesn't stop her from accomplishing what they need to do. As far as we know at the end of Ghost Protocol, she was still an agent willing to join Ethan on his next mission. I hope she's still out there kicking ass and taking names.

Ilsa is considerably the most-popular bad-ass of Mission: Impossible, and it's easy to understand why. She was first introduced in the fifth film Rogue Nation fighting henchmen two-times her size barefoot in order to free Hunt from being tortured.  While chasing down a group of rogue agents committing acts of terror known as the Syndicate, Hunt eventually brings her on board because of her connections to Solomon Lane, the master manipulator behind the organization. Both of their assignments can't be completed without the other person.

Like Carter, Ilsa is Ethan's equal in almost every way, except her mission and life is separate from his. Even though Hunt is technically with Julia, it's undeniable that Ilsa and Hunt have chemistry; their first run-in is a hand-to-hand combat scene and quite flirtatious. As the action in the movie increases, so does their chemistry. As Hunt and Faust kick ass all over the world together, they practically end up falling in love (Ilsa asks Ethan to leave IMF behind so they could go into hiding together) but continue to choose their work anyways. No matter how much attraction there is between them, she still goes her own way. Nothing stops her. Not even shoes.

It's wonderful that she's another female character besides Julia to come back for a sequel, where things get more complicated for her and Hunt. In Fallout, Hunt is incidentally tasked with assisting Lane escape capture, and Faust's own mission intersects with his; she's been assigned to kill Lane to prove her loyalty to MI6. Their feelings for each other resurface, but are set aside to save the world. Throughout both films Rogue Nation and Fallout, Ilsa is Hunt's counterpart in almost every day - she's tactile, demure, and ruthless; she has plenty of scenes to show that she's emotionally layered as well as a physical bad-ass; they both value each other's lives and put everything on the line to get the job done. Her story isn't bound to his; it merely intersects because after everything is said and done, she does her own thing.