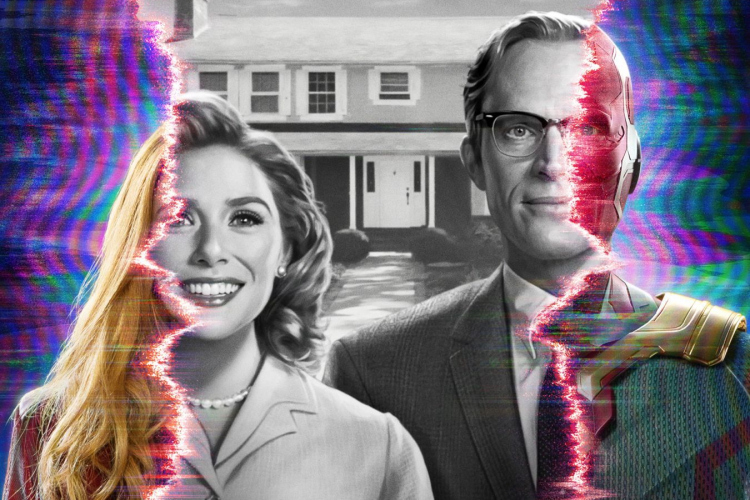 I've always liked Wanda, but mostly watched her show without a lot of expectations. After it was over, there was a lot more than I thought I'd need to get off my chest about her arc, Vision, and their series WandaVision as an essay? rant? rave? It contains spoilers. Read at your own risk.
Wanda’s powers has grown in tandem with her emotions - how to understand what she's capable of, how others feared her, and what she has to do to protect her loved ones. Since she and her brother Pietro debuted in the Marvel Cinematic Universe in 2012, she’s had more than her fair share of repressed emotions to sort through.  Her abilities were, after all, born out of a "hopeful" act of revenge against Tony Stark – whose bombs killed both of their parents and nearly left them for dead. It wasn’t long before they switched teams to The Avengers. With enough pain to wield once Pietro was caught in the crossfire, we got a taste of what she could do if she was affected deeply enough: decimating all of Ultron’s clones and ripping out another murder-bot's vibranium "heart" with her hands.
What’s made her formidable over the years is that her abilities let her do anything she sets her mind to. They’ve always been consumed or transformed her sense of self through heartache and growth, and defining who she is with and without Vision. She began to learn how to curb her skills until a fiery explosion forced her into internment with Vision at the compound in Captain America: Civil War. Not only did she and Vision connect over their link to the Mind Stone, her escape to stand up against The Accords began when Wanda was reminded she could free herself by crushing him into the surface, “I can’t control other people’s fears, only my own.” The question of her arc so far was never that she wasn’t powerful, but what she could do if she was totally in control of herself. The answer eventually came two-fold.
The first was after she sacrificed Vision in Avengers: Infinity War. Her and Vision only got a brief reprieve to be normal and free after they went rogue against The Accords. And, then Thanos brought them back to reality. The Avengers did everything they could to ensure that Vision didn’t have to be sacrificed, almost for the sake of Wanda and not trading one life for another. Eventually, she had to do it anyways. It was her love for him that made her resist killing him for the Mind Stone, and it was his love for her that made him swore he wouldn’t feel pain – only her – when she finally had to. Given the opportunity to make Thanos pay for what he did to her in Avengers: Endgame, she vowed to make him remember who she was so violently that he forced his own army to start firing away at everyone on the ground and distracted him long enough for Captain Marvel to arrive as backup.

The second time the question of Wanda’s abilities is answered is with WandaVision. After the Blip brought everybody back who was killed from Thanos’s Snap, Wanda is forced to face losing Vision for good. In their own fragile bubble, they live out their relationship under the veil of old tv shows until more clues and several intruders prove nothing is what it seems. Since love and loss is nothing new to Wanda, it’s not surprising that her series goes to the heart of everything she’s experienced to inform what she’s capable of. But what is surprising is how much the series semi-limits itself into delving more into what makes Wanda so rare as a female character – to be powerful and emotional, and not have to wear either one on her sleeves.

In the beginning, the first few episodes, there’s a sweet escapism to what Wanda is trying to achieve. The series is focused and clear on what it wants to be – to let Wanda wipe the slate clean and run the show of her own life. An unrequited pang of yearning infuses every moment between Wanda and Vision because we know as the audience, for all of the charming moments of wedded bliss, marital squabbles, and having kids, it’s not meant to be. As much as we can try to believe this is how their life could be in another universe, this one is only tangible because it’s by Wanda’s design. She’s controlling of everything – the lines, characters, plots, and editing out the parts that don’t fit in with her narrative.

Watching the show unfold every week made Wanda’s creation was liberating – who wouldn’t want to edit out 2020, where our escape has been found in tv shows and movies, and then we have to be reminded of the insanity of our governments, the pandemic, and much more. Once we find reprieve, we find a million more reasons to hold our breath or wait for the other shoe to drop. Of course, in the long run, the depth with how we immerse ourselves in escape might not become healthy; but again, the escapism is meaningful now to cope with the present and is the future when we look back on what helped us pull through.
Where this lasted the best was letting WandaVision feel like a real creation of her own, seamlessly transforming the aesthetic and mood from decade to decade. Even if the writing of WandaVision leaves a lot to be desired, there’s no mistaking how swell the production design was to make the 1940s to 1990s come alive so well from the practical and special effects to the costume and attention to running gags. The pairing of Wanda and Vision might've not been the most popular in the MCU, but the chemistry between Elizabeth Olsen and Paul Bettany was enough in WandaVision to make you love them much more now. Both of their performances were impressive and fun, playing their contemporary characters trying to navigate her nostalgia, but also being very aware that they didn’t belong in the time periods they found themselves in.

Vision: We have said goodbye before, so it stands to reason
Wanda: We'll say hello again?