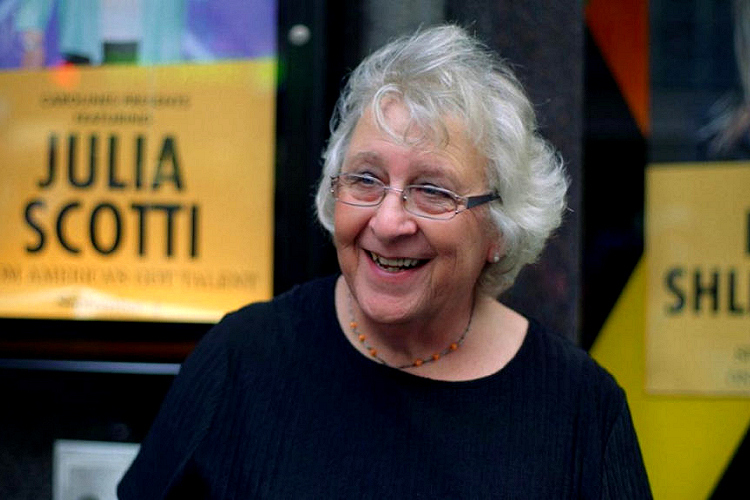 For the second time in her life, Julia Scotti rocked the comedy world when she auditioned for America’s Got Talent in 2016. After drawing approval and laughter from the live studio audience and judges, her humbling revelation of having transitioned and comedic verve made her a beloved favorite and later a finalist that year. Though many might know her best from her original televised comeback, it’s one of just many that’s highlighted and explored in the documentary Julia Scotti: Funny That Way.

Shot over a period of five years, director Susan Sandler’s documentary with Julia Scotti trails the comedian’s comeback and her complicated journey of transitioning, identity, and healing. Going primarily from the title, humor is an easy way ‘in’ to enjoying the documentary. There are plenty of jokes and anecdotes sprinkled throughout, as well as heartwarming meetings with comedy pals and stand-up routines, that will put a smile on your face. But underneath the surface the duo – Sandler and Scotti – dig deep to show not just the stand-up Scotti’s spent a lifetime honing, but the multi-faceted journey of compassion Scotti strives for with herself and the world around her.
Taking us back to the start of sorts, the documentary takes its time to explore Scotti living the dream as a headlining comedian appearing in club all across the U.S. in the late 1980s. Though it seemed like Scotti was on top of the comedy world, they struggled personally and professionally as issues of gender identity and sexuality came to light. At a time when gender dysphoria and gender reassignment surgery was rare, Scotti’s process to transitioning led to hormonal treatments, surgery, and a new identity as Julia Scotti at forty-seven. Along the way, she lost wives, family, and her career. After reinventing herself, she’s begun her journey back to the stand-up stage at fifty, while rebuilding relationships with her children after fifteen years of estrangement.
Using interviews with Scotti and her children as well as narrated animation and archival footage, Scotti explores the ‘blessing and the curse’ that happened the day she discovered who she was – how the liberation of enjoying every ounce of her womanhood also left lingering wounds such as the rift with her third ex-wife who supported her transition and gender-related issues that still play a role in her self-discovery today. Her reconciliation with her own misconceptions of gender, speaking out against transphobia such as a doctor misgendering her while recovering from spinal surgery, and helping her son with his own comedy career further opens up a conversation about the limits of what society considers masculine or feminine, transphobia, and homophobia. Though the film primarily centers on Scotti's life and experiences, it also presents further outlooks on society's attachment to vapid and ignorant ideas of "being normal."
As a first-time documentary filmmaker (at 72 years old), Sandler pieces together an inspiring portrait that finds a perfect balance between showing Scotti gaining a stride on stage and in her own life. She streamlines Julia Scotti: Funny That Way with candor, vulnerability, and empathy that lets you ride the wave of joy, compassion, regret, sorrow, and acceptance. Undoubtedly, comedy helps Scotti find her voice again as a comedian to her audience, a mother to her children, and a public speaker. But her whole story also shines a rare light that highlights the roadblocks of waiting too long to discovering your truth and imploring hope that it's never too late to accept who you truly are.
Screening Julia Scotti: Funny That Way was a part of my coverage of this year’s Athena Film Festival. Check out more of my reviews here and the official website to Julia Scotti: Funny That Way.
at March 13, 2021