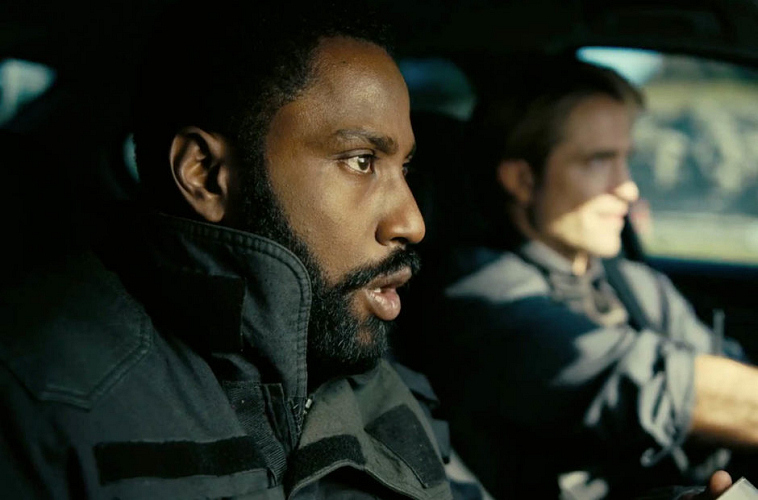 CIA Agent and the Protagonist (John David Washington) is given a word – tenet – and the objective to  trail a Russian oligarch Andrei Sator (Kenneth Branagh) who communicates with the future. As Sator sets his sight on obliterating humanity, the Protagonist does everything he can to save the world with the help of a fellow agent official Neil (Robert Pattinson) and Sator’s estranged wife (Elizabeth Debicki).
“Don’t try to understand it,” as scientist (Clemence Posey) declares in Tenet, the most concise way to approaching a Christopher Nolan film. You know that you’re going to get characters navigating a timey-wimey unraveling plot filled with exposition, amazing stunts, an ear-blasting score, and a suitable cast to carry it all on their shoulders. Where Nolan slightly fails with his latest mind-boggling adventure is with the following phrase, “feel it.”
Ironically, everything here is right out of Nolan’s staple of work. Similar to the clique of Inception led by Leonardo DiCaprio, Tom Hardy, and Jordan Gordon Levitt (or any of his previous casts), this ensemble meshes well together. John David Washington’s charisma draws out a tedious conflict with Kenneth Branagh, a friendly camaraderie with Robert Pattinson, and trusting warmth with Elizabeth Debicki. Despite the heftiness of Nolan’s script, they make a suitable crew who are easy to watch as their various cahoots unfold. Nolan also always packs his films with tactile stunts you won’t find anywhere else. With a story that helms the concept of moving forward and backward in time, there are sequences here that are on the same level of “the kicks” in Inception or the race to dock the Endurance in Interstellar - they'll baffle you with their practical effects yet ingenious execution. And instead of a dynamo score by the always-reliable composer Hans Zimmer, Nolan steps out of the box with Ludwig Gorannsson, who crafts an action-packed futuristic score that also blows out the dialogue.

Even though Tenet has these elements that are fun on their own, where the film goes “wrong” is how little there is to care about anything. While Nolan's plots are always a source of confusion for movie goers, I hate to flex I've never particularly struggled with them. So, Tenet isn't that hard to follow when the concept boils down to a cat and mouse chase locked in a time loop. But the script is too concerned with battening down the hatches to drop exposition and a completely forgettable subplot of an arms dealer using The Protagonist for their own means, that the story is left dry and cringe-worthingly cliché.
What works in favor for Tenet also works against it. Unlike his previous films where the hero had some semblance of humanity tying him to the world outside of saving it or a decent redemption arc, The Protagonist is the hero not because of some special inner calling to care about anyone’s particular fate but mostly it’s his duty and he’s the best at it; Neil shows up to begin and continue their beautiful chaotic friendship whenever he’s needed; Andre comes across as terrifying until his punishment via global annihilation falls down the trap of a 1960s Bond villain; Katharine is limited as the abused wife who is treated as a damsel-punching-bag for 2/3 of the story until she can “save herself” and the world (honestly one of the most offensive female roles I've ever seen). The cast does well with their roles but mostly because of they're given to work with. The action scenes are good, but they’re also too sparse to outdo what other end-of-the-world flicks have done before and more entertainingly.
Tenet is memorable for Nolan continuing his reputation to conjure a labyrinth of ideas, and there’s nothing wrong with the fact that this is his niche. But a complex film is not necessarily smart if the most resounding reaction is either confusion or accusations that everyone else who dislikes the film is  not smart enough to understand. Contrary to common film bros' defense of Nolan, some to most movie goers understand what he’s delving into - we've just learned to accept that intricate concepts without a satisfying pay-off aren't always worth our time.
Rating: ★☆☆
Have you seen Tenet? What did you think?
at January 06, 2021