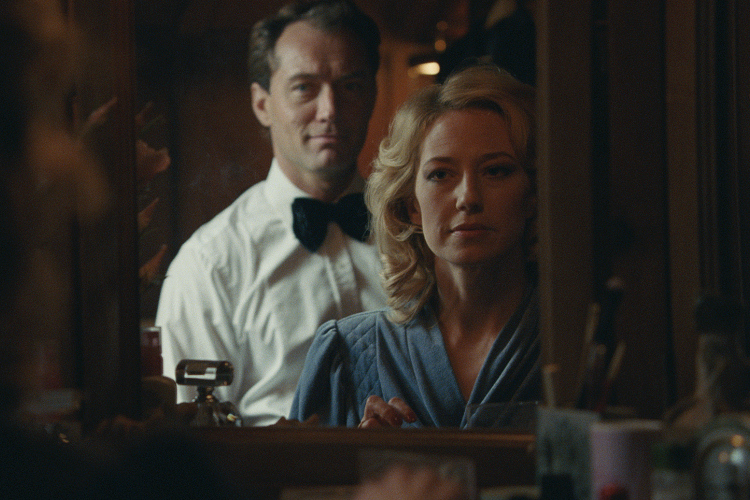 Rory O’Hara (Jude Law) has everything going for him – healthy and happy kids Samantha and Benjamin (Oona Roche and Charlie Shotwell, respectively), and a wife Allison (Carrie Coon) who challenges him. Their life seems like paradise from the outside looking in, but an endless nagging of unfulfilled potential convinces Rory otherwise. Despite the challenges of uprooting his family across the world to start over, he takes a chance on a job opportunity in the United Kingdom even though it could potentially cost him the peaceful life they already have.

Once Rory gets his family over to the United Kingdom, you’re gradually left with a question of ‘now what?’ It's "only" a change in scenery, so everyone should fall into the roles they had before. But something is not quite the same. Director and writer Sean Durkin sets up warning signs at a languid steady pace. They’re in Rory’s over-zealous enthusiasm that’s not contagious to the rest of the family; they’re in the sunny California open-roomed loft that makes way for an Elizabethan castle filled with shadowy nooks and crannies the family has to get used to; they’re in the way that Allison struggles so much to get on board with the move, you’re almost convinced she might just be a Debbie Downer rather than realizing something could truly be wrong with the actual move itself. The more time you spend with the O'Hara's, the more you realize The Nest is slowly disassembling the trappings of the nuclear family, and letting you pick up the pieces of how and why it all falls apart.

Whether or not Durkin’s approach is compelling or straight-forward enough is another story. On the surface, The Nest plays out like a familial drama packing in ideas about the fatal attempts at keeping up with the Joneses. Rory wanted a change in pace in life, but you don't truly understand what that means until the twists start pouring out. Your consistent reaction will fall under ‘what’s the big deal about that?’ that you miss the consequences spiraling out of control as the family eventually looks unrecognizable to who they were before. Durkin is assured in his ideas of using their broken bonds to feel like a horror or thriller, but his unhurried pace makes you want more - excitement, twists, jump scares. It helps that there are other elements at play in his genre-misdirection - Mátyás Erdély’s cinematography and wide open spaces creates an illusion of freedom as the family becomes more isolated from each other, and the score by composer Richard Reed Parry’s is both elegant and leery. The film is too steady and even-keeled in wanting us to have it all while holding back too much.
Outside of the production design, which is a character itself, the film easily hooks you in with the two main performances. Law layers Rory with a seemingly unbreakable ambition and idealism that stems from all the wrong places lurking under the surface – an insatiable ego and grandiose selfishness. It’s hard not to love his performance, but feel on the fence for Rory’s ambition – if you can call it that. Even more impressive is Coon as Allison. Stuck between watching her family go down in flames and doing her best to stop it by becoming a powder keg herself, at times Allison is just ruthless, just vulnerable, and more often than not a hypnotizing combo of both. In a year where award show season hinges on screeners  more than national releases, Coon easily gives one of the better performances of the year. The supporting performances of Oona Roche and Charlie Shotwell are effective enough, but don’t have enough room to develop as much as Law and Coon.

Hanging onto a hope that Rory delivers on his promises,The Nest’smain focus actually slips into view very easily: to want it all, do you have to sacrifice it all? The true obstacle of letting everything the story is trying to say wash over you is also falling for its allure to dig a little deeper – to look at all of the cracks in Rory’s ideas, pin all of your hopes that Allison can make things better, or trust that the kids will be all right. While the script delves into the characters and pivots their experiences so much from normalcy to not putting the fun in dysfunctional, the ending doesn't quite feel as satisfactory as the build-up. There’s no lie that there’s plenty going on in The Nest, but like the O’Hara’s new life, nothing ever feels quite enough.

Rating: ★★☆
Please Note: I was provided with a screener and provide an honest review. The Nest is available on Cable VOD and digital streaming starting today.
at November 17, 2020