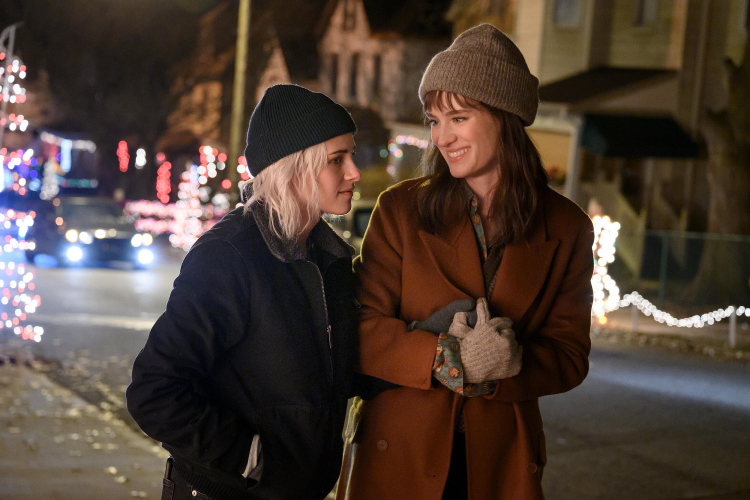 With Christmas right around the corner, Harper (Mackenzie Davis) hopes to treat her longtime girlfriend Abby (Kristen Stewart) to a special weekend getaway with her family. There’s just one problem: Harper hasn’t come out to her parents yet. To save face until she’s comfortable enough to own her sexuality, Abby goes along with pretending to be a straight roommate while hoping to seek her family's acceptance to eventually propose.
Tis the season to be jolly and gay. At least, that’s what Happiness Season would like a lot of us to believe. Marketed as a holiday movie for the gays (and straights) – yay! – it’s hard to believe how much nuance is packed into the first major studio backed lesbian holiday flick – another yay! – and yet makes a total ba-humbug mess of this coming out tale.
(This review contains spoilers)

Dysfunctional families joining together despite their differences are often at the heart of holiday family films. In the beginning, Happiest Season falls into this genre with ease. Abby and Harper share a fairly charming connection that lets Stewart and Davis play into the Hallmark-channel-inspired shenanigans of the situation - to hide their real selves but try to sneak in moments to love each other fully in secret. With Harper's clan on stand-by to make matters more farcical, their instagram filtered normalcy gradually reveals why Harper struggles to come out - her father Ted eyes a political future (Victor Garber) and can't risk any scandals while her image-obsessed mother Tipper (Mary Steenburgen) aims for perfection in every form. Their need for purity and attention with the public pushes Harper and her sisters to fulfill roles that are expected of them instead of embracing their full selves. This part of the story admirably doesn't put all of the pressure on Harper to live her truth and adequately shows how daunting it can be for her (or anyone) to do it. But as well as the film plays into the dysfunctional side of the family to heighten Harper's struggles, the triumph of two women freely declaring their love for each other surprisingly lacks a lot of compassion.
Namely, the first act of the film comes and goes in a breeze, and honestly, so does the affection we're supposed to feel for Abby and Harper. The "inside" joke of us knowing they're gay while everyone else remains aloof doesn't spark enough necessary scenes for the movie to feel like an actual romantic comedy. Through the second and third act, little seeds of heartbreak unexpectedly becomes the thread that ties everything together.
Abby and Harper's potential chemistry isn't capitalized on as much as one could expect. Instead of uniting them to face familial ignorance as a couple, the former is literally shoved into a closet to withstand relentless rejection, while the latter distances herself from Abby and acts as if her conflicted feelings don't matter. The stakes increasingly stack against Abby as a means to match why Harper can't come out, but it costs making Harper almost irredeemable. If losing her parents as a teenager during Christmas isn't enough to hate the holidays on its own, having Abby's potential mother-in-law make insensitive remarks about her being a "needy orphan" and learning that this is the third time that Harper has discarded previous partners surely will. Eventually, when the only positive gay source of camaraderie for Abby ends up being Harper's ex Riley (Aubrey Plaza), it's hard not to root for them instead. Like most romantic comedies that won't allow the characters to go their separate ways, the film still clearly aims for the girl to get the girl no matter what. The ending, despite the fact that it blissfully waves rainbow flags with pride, comes across as happy for the sake of finishing on a high note rather than an ending that's well-earned.
Courageously brought to Hulu by actor-turned-director and gay icon Clea DuVall, her vision does kickstart the representation the LGBTQ+ community is looking for, and that's admirable. Her direction isn't necessarily unique from other rom-coms, but her co-writing is at least an example as to why entertainment in general calls for material to be written in #ownvoices. She does fill the script with enough nuance to explore why coming out stories are not a monolith experience. It certainly helps that the film is filled with other queer talent to bring her characters to life. Stewart and Davis churn out heartwarming performances, but the supporting cast that steals the show - Dan Levy brings his wit to Abby's millennial-critical friend John; Mary Holland delights as the awkward and overlooked sister Jane; and Aubrey Plaza's exceptionally charismatic performance as Riley is in dire need of a spin-off of her own.
Overall, it's difficult to know where the happy comes into the Happiest Season. The self-aware title promises hope that this will be a genuinely optimistic holiday movie that can be accepted like any other holiday movie regardless of the characters' sexuality. Most will say the point of the film is for them to declare their love without fear and judgement, but the means to get there for me lacked too much development and light-heartedness to overlook what a nightmare the whole situation is. As grateful as I am to watch this sub-genre unfold and the ending of Abby and Harper's relationship to take off, I can't say for sure it's because I enjoyed the overall film as much as I felt comforted to feeling represented. Happiest Season remains charming enough to a sprinkle of queer Christmas magic as an alternative from Carol. But it'll also make me feel like this gift should be left unwrapped every time I re-watch it.
Rating: ★1/2☆☆
Have you seen Happiest Season? What did you think?
at November 27, 2020