Once Upon A River (2020) Unleashes A Promising Debut 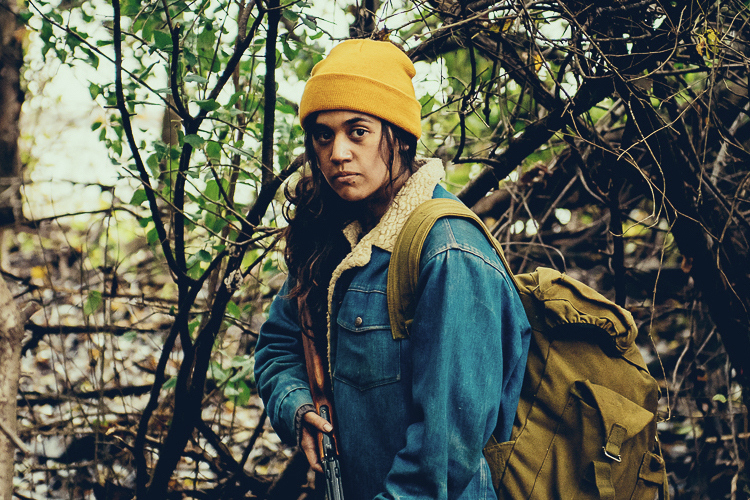 Based on the novel by Bonnie Jo Campbell, 15 year old Margo Crane (Kenadi DelaCerna) lives on the Stark River bank with her father Bernard (Tatanka Means). After she endures a family scandal that leaves her ostracized from the community and other relatives, she goes in search of her mother who left a year earlier. As she winds down the river, she encounters strangers who help her heal and start over.
As Once Upon A River is told from Crane’s perspective, the film primarily belongs to Kenadi DelaCerna. She occupies almost every frame from beginning to end, which is a tall order for an actress making her screen debut. Crane is a quiet and thoughtful heroine who internalizes her experiences, leading most of DelaCerna’s performance to rest in subtle expressions, and to do so without losing your attention of what she is thinking and feeling. DelaCerna possesses a mature presence that brings Crane to life. A solid round of supporting actors also strengthens DelaCerna’s presence on-screen from a gentle teacher who takes her in as a hitch-hiker (William) Ajuawak Kapashesit to a trailer park dweller Smoke (John Ashton) who becomes one of Crane’s greatest allies and glimpses of hope.

Director and writer Haroula Rose, also making her film debut, captures Crane’s tender journey in a similar way to DelaCerna’s performance. The film remains steady as Crane moves from place-to-place, finding new people to relate to or take her in. While the world at home and what sets her off on her road trip is cruel and unjust, she’s resourceful enough to persevere and find the good in others. Rose also employs beautiful cinematography by Charlotte Hornsby that echoes Crane’s character development and her connection with nature that keeps her going and creates a lush ambiance. While Crane moves swiftly from a lost childhood to newfound womanhood, Rose approaches Crane’s journey of healing with gentleness rather than overwhelming drama, which doesn’t let the story become too heavy-handed.

However, the deft combination of Crane’s character development and Rose’s intimate direction can act as a roadblock in gluing the audience in. Once the initial trauma settles in, which results in Crane losing her father and being ostracized, the film focuses steadily on Crane's perspective, letting us see her choices to leave, find her mother and rebuild her life. This allows us to rest in her mind and understand what she feels she has to do to keep trudging forward. She’s able to provide for herself with hunting, fishing, etc. and remains open to the possibility that good people are still out there willing to help her. That in itself is a powerful story, especially for indigenous communities, but as a narrative choice, Crane is presented as a survivor without more details to support her.
The traumatic incident that drives Crane – a Native American teenager - out from her home sparks compelling ideas about her heritage and white male corruption, privilege, and abuse. Any sense of real danger she might encounter lingers in the rear-view mirror without a lot of dynamic conflicts propping up to move the story along. However, there’s  little exploration of the trauma she endures as well as the aftermath (primarily at the hands of white men), except that Crane’s resiliency grows. Rose's “day-in-the-life” approach creates a rich slow-burning atmosphere, but there are two conflicting ideas on the surface that are at odds with each other - how indigenous women are treated by the white male hierarchy, or life is what we make of it with a chosen family instead of blood-relations. Both are explored at the surface but doesn't dive in as far as it could to make a more resounding impact.
Once Upon A River can have in impact if you let its distinct subtlety sink in. A semblance of hope is a refreshing offering for a female heroine who faces adversities, and what she makes of her life isn’t too dire or cumbersome plot-wise. Maybe beyond that the film doesn't want to fit Margo into a role that she doesn't belong which is subservient to anyone or anything other than who she's trying or wants to be. Like the river that Margo uses on her journey away from the pain that's been inflicted on her, she also finds communion with it to get her bearings on the drastic changes that are to come. The film aims more for a symbolic and gentle entry of a heroine's life rather than more direct or in-your-face. The direction and character development works in tandem to prove that they are both self-reliant and steady; however, the film struggles to challenge itself beyond what’s on the surface.
Rating: ★★☆
Please Note: I was provided with a screener and provide an honest review. Once Upon A River is available on Cable VOD and digital streaming starting today.
at October 23, 2020