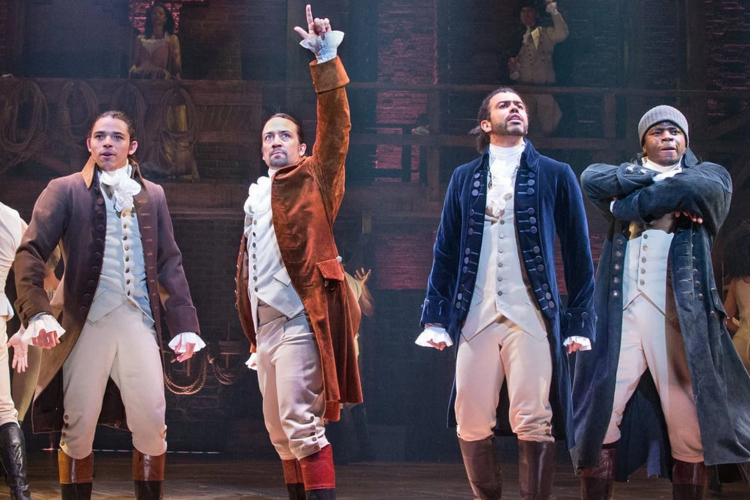 The exclusivity of Broadway makes it difficult for many to see popular productions in person. If there's one skill that theatre goers have needed to cultivate, it's listening to a soundtrack to tie you over until you can attend a tour performance. Though one can imagine how the set and production design looks with glimpses of performances at the Tony Awards or brief clips released online, it's a whole other experience to see it performed "in person." Hamilton is no exception and a leading example of how valuable a filmed production can become.

Kail devised taping the musical over three nights, craning cameras up-close and from afar to give fans the experience as if they were inside the Richard Rodgers Theatre. Instead of ensuring any version of the production was captured, he made sure took his time to edit the film since 2016. The commitment pays off with cinematography by Declan Quinn and sufficient angle actors in close-up, from the side, and as wide as the stage to offer a full view of the intricate choreography and production design. The set uses a revolving stage and special effects like lighting cues from blue (for nighttime) to orange (bombs going off in the distance) to change the time or settings. Props ranging from wooden crates to an antique desk and lamp fills in the blanks of real sets to show U.S. soldiers recovering in a tavern to Hamilton writing like he's running out of time. No two songs are approached the same way, which gives the audience a wide range of songs to revel in the story's in-depth arc.

Similar to a good concert or musical, it's difficult to describe Hamilton and how it feels to see it on Disney+. Every song explodes on stage and induces the feeling that it may be your favorite until the next one comes along and slays just as much. Miranda's work as lyricist and composer manages to switch from a rap declaration of taking on a revolution (My Shot) to a tender and upbeat love song (Helpless), and every music genre in-between with mind-boggling ease. His ability to illicit every kind of emotion - triumph, betrayal, forgiveness, arrogance, jealousy, heartbreak - gives the cast the opportunity to take advantage of their range and hit those emotional beats. To remember this isn't just a one-time performance, but something that was achieved every night is a spectacle to behold.

What truly counts in a musical, something that most contemporary musical movies miss out on, is how the music is performed for the characters to emote through song as well as telling the story. For the most part, the plot can be simplified to Burr vs Hamilton. But on stage, it goes so much further by exploring how each character is a piece of the puzzle. Their slow-burning showdown offers enough context to feel the increasing push and pull between them as friends and foes. But as the story centers on them, it also gradually shifts the timeline of America's revolution, George Washington's military and presidential reign, Hamilton's wife Eliza's place in their narrative, and the men who were willing to knock Hamilton off his pedestal to take their place in history. Hamilton is arguably the titular role, however, it's far from a one-man show with a  supporting cast who - aided by Miranda's intricate lyrics - inhabit their own emotionally-driven journeys. As a group, viewers will certainly have their 'favorites,' while also still appreciating every solo performance.

In one of the few areas the Hamilton falls short - that's also been at the heart of conversations surrounding the show - is the artistic choices that 'curses' every biopic. Not everything presented in a film based on real events should be taken at face-value, but the alterations made will inevitably spark debate about how a piece of art doesn't replicate a person's life or event point-by-point. Namely, Hamilton supported slave trade, his wife's family wasn't just the trio of Schuyler sisters, and his in-laws family were also slave traders, among many other things. Some details are hinted at or glossed over thoroughly, providing the musical to earn the same criticism similar biopics have - if it perpetuates the wrong image of the U.S. founding fathers. While this doesn't take away too much from the musical itself, it's not surprising if people have vast misconceptions - it's a good habit to question the source where any and art art comes from.

Musicals are one of the most trickiest genres to create for an audience as it requires the audience to suspend their disbelief for characters to break out into the song or maintain a lyrical-dialogue through all of their obstacles. Hamilton as a film succeeds with Miranda's seamless work as a composer and lyricist to the fine work of Kail as a director both of the film and stage version. The cast's ability to perform with so much tenderness, humor, and tenacity takes you on a practically perfect rollercoaster of drama, war, and romance. While the first act moves at a brisker pace than the second act, there's not many changes that could enhance either section. Hamilton makes it hard for fellow musicals to rise up to the hype.