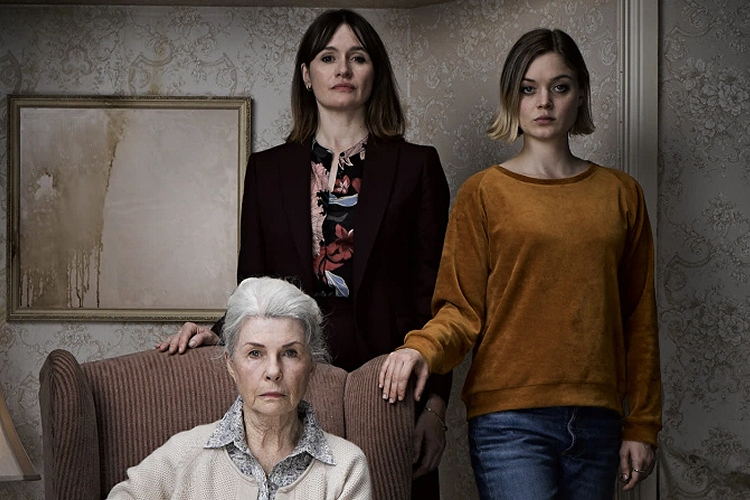 Age creeps up on us steadily. One second we're young and free, and the next we're burdened with too many responsibilities or we don't want to be a burden to our loved ones. What becomes of us when we age and those around us is at the heart of Relic - a horror film that makes us come face-to-face with the shock, confusion, and (hopefully) understanding aging inevitably causes.

After their grandmother Edna (Robyn Nevin) is reported missing, her daughter and granddaughter Kay (Emily Mortimer) and Sam (Bella Heathcote) journeys to her house to find out what happened and discover signs of disarray that makes them realize how severely she's been struggling on her own. When Edna mysteriously re-appears as if nothing happened, her erratic behavior forces them to realize there might be more to her dementia than meets the eye.

Director and co-writer Natalie Erika James marks her debut by using the disconnect we feel in our minds and bodies when an elder loses their place in the world. On the surface, her seemingly normal world has all of the makings of a typical haunted house feature - you can't quite trust exactly what is going on in Edna's house or with Edna herself. While Edna's mind slowly turns against her, so does the house - a labyrinth of literal and figurative decay with mysterious water stains, shadow figures that blend into the house, and things that bump into the night. James builds the film with a solid foundation between suspense and human connection, opting for enough moments to create tension within and around the family, and the question of the unknown.

From the looks of Edna as well her house, there's a misconception of who she is or has become. Edna is aided by a wonderful performance by Robyn Nevin, who lets us see all sides of her - a natural forgetfulness that comes with dementia, outbursts of violence that comes across as if she's possessed, and a tenderness that offers surreal comfort beyond what physically or mentally defines her. Through her, we see how her condition affects her daughter and granddaughter - there's little room to deny that they may follow in her footsteps some day. Alongside Nevin, Emily Mortimer and Bella Heathcote draw on small moments to create their family dynamic. Kay's respectfully disconnected from her mother with many of their moments striking a balance between misunderstanding and impatience. Sam, on the other hand, provides the understanding and patience of the younger generation who has yet to truly experience a parent's physical health slip and holding onto what was instead of what is becoming of Edna. As an ensemble, it smoothly feels like they teetering on the edge of frayed relationships that makes taking care of Edna all the more difficult.

The film itself contains exploration with the characters, but it might draw a divisive line by how it teases suspense before letting it explode. Impressively, Relic is a rare horror story that wants you to make the cake before you eat it too. The first and second act remain slow and steady for the most part, hinting at what Edna might be afflicted by: is the house haunted, is she being possessed, is it purely all in Edna’s mind? There's more than enough details that hint at what's going on and twist our expectations of what 'haunted house' horrors can be. Cinematographer Charlie Sarroff, the muted color palettes, and steady heart-pounding sound design draws out the occasional jump scares and double-takes of what's in lurking the background before truly taking off with the ending. It's not until the third act where the rollercoaster ride of horror truly takes off. From beginning to end, the film transitions seamlessly from a subdued conflict to a heightened one, however, the wait for the tension to pay off might be too little too late to outdo the former.

Horror is often used to explore what makes us fearful about ourselves and to help us confront our deepest and darkest problems or desires. Relic refreshingly combines the subtle elements of horror and the haunted horror setting with the deep exploration of a human drama, where the themes that are scary are also relatable. Instead of attacking our senses with theatrics, James diligently focuses on letting questions or doubts linger, and the characters' fears mirror our own. Her approach might not work for everyone who are looking for adrenaline seekers, but it's difficult to not consider her film as another successful example of the recent horror renaissance that provides terror as well as reflection.

Please Note: I was provided with a screener to watch this film and provide an honest review.