Defending Jacob (2020) Is A Dizzying Search for the Truth 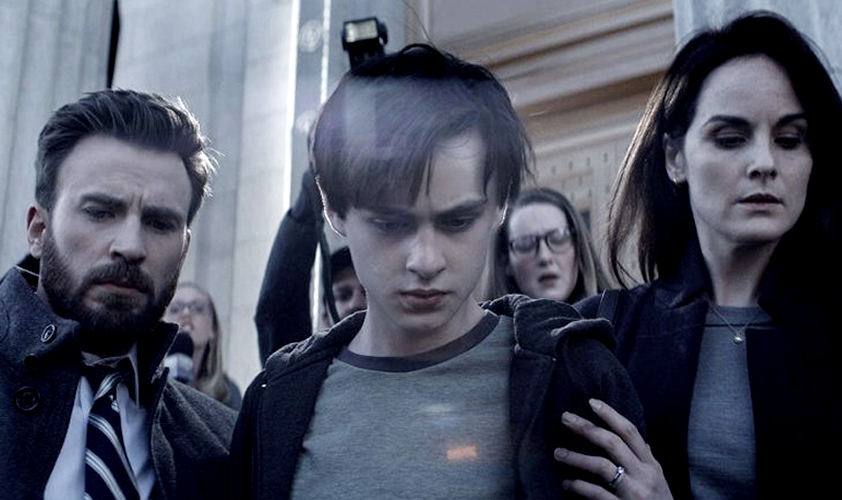 Does it ever become a conflict of interest for a parent to protect their child? It seems like a dubious question at best and an easy answer on the surface. Familial ties and love are meant to be unconditional, but if an innocent kid commits an unspeakable crime, the line between devotion and justice can become blurred. Based on the novel by William Landy, Defending Jacob explores the pain of facing the truth of what someone you loved is capable of.

There are no major spoilers based on the plot or big reveals - however, please read ahead at your own risk.
14 year old Jacob Barber (Jaeden Martell) is convicted of murdering a fellow student. Burdened by his own violent past, father and assistant District Attorney Andy (Chris Evans) will do anything to prove his son’s innocence, while his wife Laurie (Michelle Dockery) yearns for the simple truth. In the process, they unearth secrets almost as worse as the accusations that threaten to tear their lives apart.
As far as the show has been marketed, and definitely on a first viewing, Defending Jacob presents itself as a who-dun-it, taking you through the story from Jacob becoming a suspect to his trial. Every episode unfolds like a slow-burning saga, taking its time to make you question if he did it or present possible suspects. Direction by Morten Tyldum and writing by Mark Bomback amplifies the patient search for the verdict with the flair of a modernized film noir – dark blue coloring, shadowy lighting, heart-pounding music by Atli Örvarsson, and a selection of stock characters from the crime genre.
However, it's difficult to slap a label of thriller on the series - its main plot explores who the real murderer is, but the subplot revolving the Barbers drives the series by diving into their closets of skeletons and the wedges that push them apart.
In perfect alignment with the series title, Defending Jacob is Andy’s M.O. There’s nothing that Andy won’t do support his son. Undoubtedly faithful in his innocence, and also driven by his own dark past, Andy increasingly crosses boundaries to point the finger at anyone else and brings up questions about how much a parent can be culpable with their kid's actions by protecting them. With lies and cover-ups twisting the truth at every turn, Laurie questions what it means to be a good parent and loving their child versus being a good person and letting justice being served. As more of their own issues unfolds in alignment with Jacob’s trial, the series drives its momentum on the tension between the family and what their ultimate breaking point is.
With Defending Jacob centered on the Barber family, it takes its strength of performances with Chris Evans, followed by Michelle Dockery and Jaeden Martell. Evans portrays Andy with seasoned layers of guilt, anger, defensiveness, love, and trust, often times with just one look, and is arguably given more to uncover and explore here than Dockery and Martell. The former bears the brunt of Laurie handling how the media, friends, and herself think of the family; at times, she’s not written with as much objectivity as Andy is, often portrayed as over-reacting to every situation or wearing her emotions on her sleeve. When she's given a push outside of the box in the finale two episodes is where she truly shines. Martell, on the other hand, is given enough freedom to play a variety of emotions and mannerisms to play into Jacob's - friendly to seem innocent; rebellious to make us think he's hiding something; lonely to lead us to believe he's just a black sheep.  As a trio, they work well enough together to draw you into their lives and make you feel like you're apart of their emotional rollercoaster. Individually, though, there are points where the show could've improved deepening Laurie and Jacob's own arcs. While a host of supporting characters come in and out of the picture, the series contains a credible ensemble of castmates who more or less pad the story as far as the Barbers need them.
After every scandalous stone is unturned, and every subsequent aftermath is played out, Defending Jacob spends its eight-hours exuding the scale of a film and matches it with a steady rise in suspense that will keep you on the edge of your seat towards the end. Hearkening back to the 90s where legal films were all the rage, this would’ve been a fitting entry with the likes of The Firm or Gone Girl, but on a more even-tempered level. Where the story might sabotage itself is not only how well it revolves around both a murder-mystery as well as a romp into the characters' issues, but that when the twists start to unravel in the 11th hour, your first impression of the series will make you realize how much more there is to the story than just wondering if Jacob did it. With great performances by the cast, especially Evans, as well as an even tone between thrills and character development, Defending Jacob is worth watching more than once to wrap your head around the truth.
Rating: ★★1/2☆
Defending Jacob is available to watch on Apple TV +
at May 31, 2020