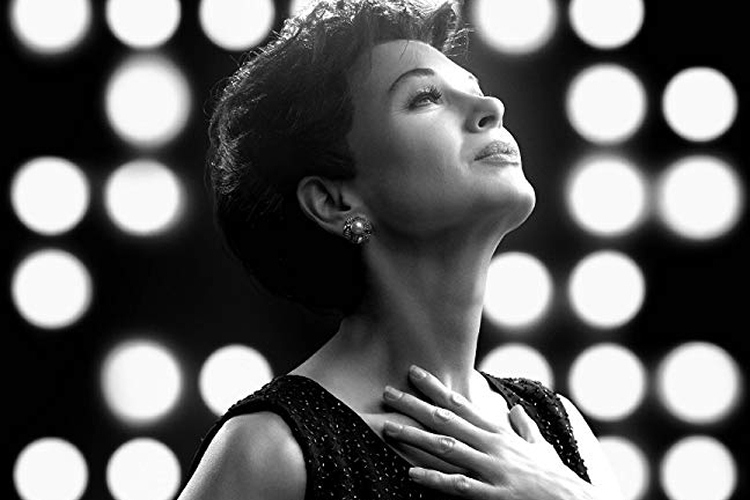 To start, Judy’s smartest move is knowing its limitations. In comparison to the play End of the Rainbow, which portrays her as a manic psychopath, Tom Edge’s script paints a full picture of Garland as a mother, performer, wife, and businesswoman. Instead of a pure musical, the film is a straight-forward drama with musical elements. The conflict is essentially Garland's life and how it is crumbling around her. Her destitution, losing the custody of her kids, and fighting a tarnished reputation as well as prescription abuse, a flailing voice, depression, insomnia, and anxiety create a vicious cycle; her struggling career and mental health suffers alongside her need to perform to survive and vice versa. Just as she did in real life, she tumbled and then managed to get up again. Despite exploring the eleventh hour, the film also shows her tenacity, humor, and warmth. By making her a well-rounded character, we're able to see less of her as a subject to gawk at and more of a real person with flaws - the way the world often forgets to treat celebrities.

Because the film takes a linear approach, many will find Judy to fall in line with the typical biopic genre and want more pizzazz or scandalous drama. However, the lack of flash and excess is one of the film's best strengths for me. The only real 'curveball' are flashbacks to Garland's childhood and the abuse she endured at MGM and by Louis B. Mayer. They only scratch the surface of what she experienced during her lifetime, but they are rare and effective in serving how Garland's inner demons started. Sometimes it's enough to show one part of someone's life without burdening itself with more than it can hold, so another biopic can handle other events that happened.

For his directorial debut, Goold deserves credit for the restraint he showed in the story, while also letting the film become a visual feast elsewhere. There's a lot of layers to how Garland comes alive, especially in cinematographer Ole Bratt Birkeland and costume designer Jany Temime's ability to capture Renee and Judy's physicality. Birkeland's camera work trails Garland with a special level of intimacy, framing her highs and lows without being invasive. And, in contrast to the bleak nature of Garland's life at the time, Temime's costumes are bold, colorful, and appear so authentically as if they came straight of Garland's closet. Between the direction and script to the cinematography, production and costume design, Goold mixes style and substance beautifully.

The heart of the movie is not only Garland herself, but also the film’s leading lady Renee Zellweger. While plenty are claiming Oscar talk by the sheer look of Zellweger's transformation, as a Garland fanatic, there's more to Zellweger's performance than meets the eye of a side-by-side comparison. The research she did by watching Garland's shows and taking voice lessons becomes evident almost immediately, just by how Zellweger carries herself - the posture, facial expressions, body mannerisms, and a respectable voice that fits Garland's overworked pipes in the end. Her physicality isn’t just a mask she wears in and out of the film, but one that she slips into effortlessly, it’s difficult to say where Zellweger begins and Garland ends.

As much as the script leans heavily on Garland to make her the literal star, the supporting roles are cast well-enough but could’ve been more developed. Rufus Sewell is fine as Garland's third ex-husband Sid Luft, while Finn Wittrock makes the most of the sketchy but lovestruck newer husband Mickey Deans. Jesse Buckeley as Rosalyn, the assistant at Talk of the Town, and Royce Pierreson as Burt the conductor mostly represent how Garland might've been difficult to work with but also managed to win everyone over; they're lovely performances and a beacon of heart around Garland's problems. By far, the two most developed supporting roles is a couple Dan (Andy Nyman) and Stan (Daniel Cerqueira), who are fans of Garland and end up entertaining her for an evening. Their scenes are earnestly forced, but the emotions earned from them offers the deep connection Garland had with her fans, especially the LGBTQ community.

Surprisingly, where the film struggles is the musical sequences. Similar to the flashbacks, Garland's Talk of the Town performances are used very rarely. So when they appear, they’ve almost got to be spotless in order to truly encapsulate how magnetic Garland was on-stage. While the camera certainly knows how to frame the numbers, the transitions from the main story to the musical sequences and flashbacks is jumpy and disorganized. Though Renee captures Garland's mannerisms beautifully in every non-musical scene, her physicality on-stage didn't hit the mark. Parts of Come Rain or Come Shine and For Once In My Life are a campy impersonation, while By Myself, Get Happy and Over The Rainbow are more natural and heart-wrenching (though the ending with Over the Rainbow is entirely farce). Though Zellweger's singing resembles Garland's worn out pipes at that time, the staging could've been stronger or included more songs from the original soundtrack. I might change my mind when I see it again, but the film is weakened by not entirely pulling off Garland’s full range.

As difficult as it may be to watch an idol's downfall, there's a real honesty to exploring her public and private persona, no matter how raw and vulnerable it may be. While there are tiny creative liberties taken here and there, the changes don't match the scale of other biopics that are more fiction than fact. Goold shows admirable restraint with this version of the truth and an attention to detail more longtime fans will catch. Though Garland was a victim – of the old Hollywood system, the media’s scrutiny, audience demands, superficial beauty standards, thieving managers, and ex-husbands – the script doesn’t treat her like one. Sometimes that’s all a biopic needs to show how she was a real person behind the fame. There is, perhaps, no film that can fully reflect her life. But Judy reminds us of the woman behind the stardom, and that's a start.