Katie Says Goodbye (2016) Strives to Find Meaning Out Of Misery 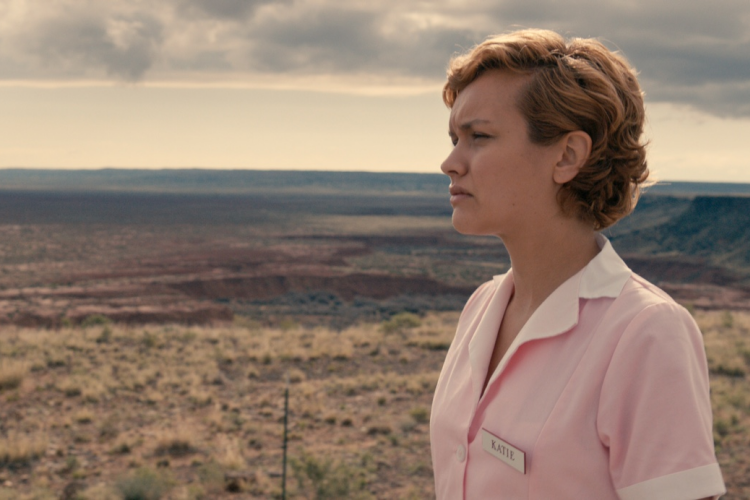 Katie (Olivia Cooke) dreams of leaving her past behind to move to San Francisco and attend beauty school. While pulling double-shifts as a waitress where her tips are wasted by her alcoholic mother, the seventeen-year-old supplements her savings as a prostitute. As she reserves every dime she can for greener pastures, falling in love with an ex-convict Bruno (Christopher Abbott) spirals her life out of control.

Everyone in Katie Says Goodbye has to forge their way in a claustrophobic nowhere town in the middle of the desert. There’s little to do for its residents except serve travelers on the road, drink, have sex – either for fun or as a gig. Left to fend for themselves with the basic necessities, Katie makes the best of what she has always looking for the silver lining. A few glimpses at her day-to-day life of monotonous waitressing, and excitedly gleaming at passing trains offers no rhyme or reason as to why she remains abundantly hopeful, and yet the film lovingly sets up this infectious charm only to gradually deconstruct it.

The true testament of the film’s power is its lead performance by Olivia Cooke. With the camera rarely leaving Cooke’s side, the movie focuses on all of Katie’s joy, pain, naivete, and determination. She is the compassionate heart of the film. Her supporting counterparts are more difficult to invest in - Bruno is the ultimate silent type whose criminal history is never explored; Dirk (Chris Lowell) wants to take advantage of Katie's as a prostitute and taunts her through Bruno; Matty (Keir Gilchrist) is too intimidated to stand up for himself against Dirk's brutish bullying. Not enough backstory is asserted to the men surrounding Katie, but they ultimately drive the main conflict and solution for her to say goodbye. Katie finds better companionship with a kind truck driver / client Bear (Jim Belushi) and Katie’s boss Maybelle (Mary Steenburgen) - both deliver wonderful performances and offer a breath of fresh air against the vultures surrounding Katie.

With rural America as the dog-eat-dog backdrop to Katie's eternal hope and determination, the film tries to justify meaning out of the misery she experiences. It's not that there are others who stand in her way of making her dreams come true, but that the supporting characters primarily treat her as if she owes them what they want and are willing to take it without looking back, remorse, or restitution. The motivation behind this is clear: to help Katie leave New Mexico behind. While Roberts explores explicit scenes with control and tact, one gruesome act of violence after another lacks a balance between creating the stakes Katie needs to move on and acting as a divisive storytelling device. Though the film tries to recoup the damage Katie endures, the final scene of resilience (brilliantly achieved by Cooke) struggles to placate the experiences she endures.

Katie Says Goodbye implements purposeful direction by the writer and director Wayne Roberts. Diving deep into grim territories for his debut film, he has an intimate eye for capturing Katie’s desert-dwelling world and the actors who fill it. A necessary credit to this goes to Paula Huidobro’s gorgeous cinematography, which paints a hypnotizing picture between the vast arid horizon and limited locations. The script creates such a genuine purity and inherent selflessness in Katie from the get-go, the film gradually creates a double-edged sword with her optimism - she's too selfless to seek help and stand up for herself but too strong to be broken. Having starred in Thoroughbreds and Bates Motel, Cooke is at the start of a long and impressive career ahead. Katie on her own is a meaningful human drama, but the brutal twists surrounding her ambitions leave a lot to be desired. If the rumored trilogy comes to fruition, there's hope that the future installments will expand on her journey more.


Rating for the film: ★½☆☆
Have you seen Katie Says Goodbye? What do you think?

Please Note: I was provided with a screener in exchange for an honest review. Katie Says Goodbye is currently available to watch on Amazon Prime, Youtube and Vudu.
at July 12, 2019