The Favourite (2018) Is Capable of Much Pleasantness 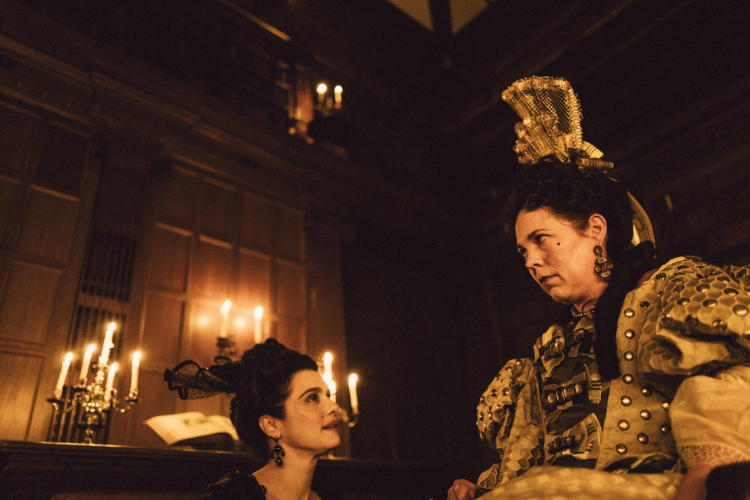 With some directors, you never know what you’re going to get. As familiar as you may be with their past projects, they always manage to create something within their own style but also off the beaten track. Director Yorgos Lanthimos is easily one of those types of directors today. Every film he produces from The Lobster to The Killing of A Sacred Deer, Lanthimos stands out even from his own work. This is easily the biggest, perhaps the best way, to describe his latest film The Favourite.

Set in the early 18th century, Sarah Churchill (Rachel Weisz) relishes having Queen Anne (Olivia Colman) all to herself. And then, her cousin Abigail Masham (Emma Stone) arrives on their castle's doorstep striving to make a name for herself by any means necessary. The two begin vying for the attention of the Queen as Britain braces itself for war against France.

When we think of period films, there are plenty that fall into the typical historical romance or drama. The genre itself is almost predictable by not daring to color outside of the same storytelling lines: big wars created and settled by men, or a woman in an arranged marriage having a love affair that society/her family rejects. Unlike Joe Wright’s formulaic “romance” in The Duchess, or even the slightly unconventional biopic of Marie Antoinette by director Sofia Coppola, or any film we can name off the top of our heads, The Favourite is not like any of the historical films we’re used to.

Taking place behind-the-political doors of Queen Anne’s bedroom, or ‘war’ room, the film centers on the ruthless love triangle between three women. Sarah’s power-hungry and resilient, and you never quite know what is up her sleeve. Anne’s been crippled by her own mental and physical health, but secretly knows how to play the game just as well as her mistresses. Abigail’s got the street smarts to stay one move ahead of everyone else, but not necessarily the tact to survive even the worst traps she sets out for others. Gone are the brooding whirlwind dalliances of two lovebirds wooing each other with grand promises as they quarrel against pride or prejudice to live happily ever after. And in swoops a chess game between women where each one is a queen in their own right as well as a pawn. Their motivations vary from a love of power, security, validation, and real love, as their comebacks are so subtle, you never know who has truly won or lost the battle of wits and dominance.

As is expected from Lanthimos’s work, The Favourite is not simplistic at all. The performances, for one, by Weisz, Colman and Stone are incredible. Any first impression you have of their characters in the beginning is challenged and changes over time; they’re as cold as they’re loving; vulnerable and strong; in control and powerless; vicious and soft. As a trio and individually, they are a tour-de-force and nicely complemented by the supporting roles by Nicholas Hoult, Joe Alwyn, and James Smith.

And, then there’s the entire process of how the film looks and feels. The Favourite fits what you expect of the historical genre with the production design – gorgeous costumes by goddess Sandra Powell, a lively and unsettling classical soundtrack, and the beautiful countryside-picturesque setting. And yet, the unconventional storytelling by Deborah Davis and Tony McNamara is so unique, it can only be matched by Lanthimos's vision, one that is a kaleidoscope of small portraits blurring together into something grander and complex than could ever be anticipated.

Lanthimos’s style, or how I can describe it at least, is one that lingers in a hypnotizing, awkward, and enchanting way. He's not in a rush for the characters to venture from one maneuver to another; sometimes there's a great build-up to twists or revelations only to realize the next cat-and-mouse game you were waiting for has already come and gone. He’ll juxtapose scenes in dizzying montages or steady the camera on a character so long the scene can become unnerving, boring, confusing, or captivating. His films are rich in detail and yet it feels like nothing is going on at all; so many moving pieces blend together seamlessly, it's difficult to distinguish what makes him different except that his work just is.

Despite the film's out-of-the-box approach in creating complex female characters, its marketing or hype about a lesbian love story left me confused. Some critics have been calling The Favourite another All About Eve (a 1950 film starring Bette Davis where a narcissistic ingenue tries to steal the spotlight from a veteran actress), and to an extent, the storytelling comparisons are true. However, many of the hot-takes about Sarah, Anne and Abigail has been watered down to 'oh wow lesbians in the 18th century?!' clickbait. Not only do the characters come across as bisexual or asexual more than purely sapphic because of their adjacent relationships with men, but if power and manipulation were stripped out of the equation, one has to wonder if the women would be attracted to each other at all. While intimacy lingers between Sarah and Anne, those moments are outmatched by the need for control, almost to the point where some acts aren't consensual and leave the film cold. At the very least, the characters are deeply morally ambiguous. The film's take on sexuality and reversing gender stereotypes is refreshing compared to most films in general. However, there was a slight misdirection to me about what the film is/isn't trying to be versus what it actually is.

Like a lot of films that gain hype for award shows, The Favourite is a literal favorite the 2018 season. And, in many ways I agree - the cast, the writing, the production design, the very timely story of complex relationships between women are all top notch. More than just hearing about the women who stand behind the accomplishments their male counterparts receive credit for, it's high time we're getting more films about the women behind other women or are out to get their own piece of the pie. In a time where Hollywood is vying for films to break out of the stereotypical norms, especially a calling for more films to be directed by women, it’s refreshing how something so absurd, dark, and twisted could come out of the mind of someone like Yorgos Lanthimos.