Some Reasons Why 2018 Wasn't A Complete Waste 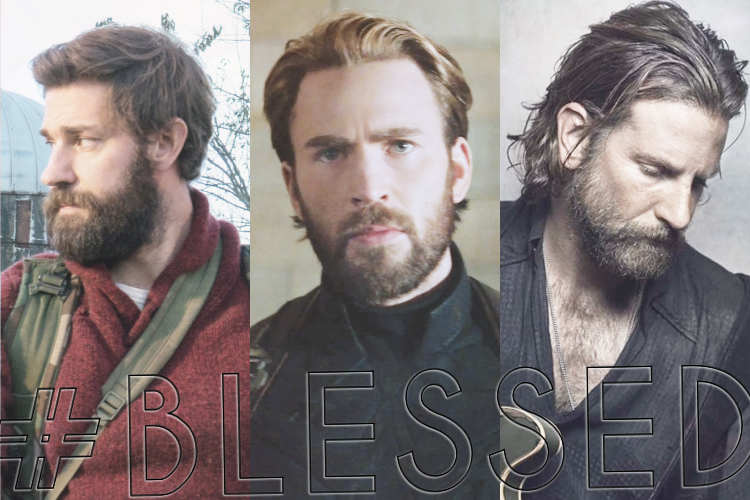 In and out of Hollywood, 2018 had a lot going on, sometimes a little too many unbelievable and deplorable headlines to fully comprehend. But that's what some saving graces are for: to keep your head above water when you think you could lose your sanity. There's a few moments that stand out at the top of my list for making this hectic year worth it and made me feel #BLESSED.

First, I was only into Aquaman for Jason Momoa. And, then Amber Heard had to go and be all gorgeous. And, then Nicole Kidman had to keep being the goddess-that-walks-among us...and then Patrick Wilson, William DeFoe and Yahya Abdul-Mateen II had to be talented too as if the movie's cup wasn't already running over. Like God bless the sea gods, honestly.

Why are people ASLEEP on Black Panther? LIKE...where did the excitement go? It blew Infinity War out of the water for me....so I don't know what planet other people are on, but I love that movie. And the women of it: Okoye (Shuri, Nakia, Ramande) was a blessing for the MCU. Not just the wig-throwing or spear-fights. They were fully-realized complex female characters, and we still need more of those now more than ever.

I love that the cinematographer is going for 'camera fell over and someone said action anyways' but I'M GETTING DIZZY. pic.twitter.com/1JXj28vREs
— Katy Rochelle (@katyrochelle) June 21, 2018

I'm always wary doing live-tweets 'cause I don't want to alienate people's feeds....but that didn't stop me from having some great evenings entertaining myself (Margaret and Betsy) with: First season of The Punisher. I mean, that black Henleys Jon Bernthal wore deserved its own thread. Epic watch of like twenty Marvel movies in preparation for Infinity War. Yes, a whole thread of Fifty Shades. The brief Tudors/Henry Cavill experiment. And my personal favorite: fangirling over the entire Mission: Impossible series. I might do more of these in 2019, so consider this my apology and warning in advance.

Right now, I'm watching Game of Thrones for the very first time. I don't know anything about the show and managed to be like 99% spoiler-free, so...come and join me!

Lord, blessed the day this tweeter was tired and made this golden video. I can't even tell you how many times I've uttered this or cracked up at the thought of this tweet.

When one relationship doesn't let you see other relationships in your life because it's so fucking good...I think that's called the one. #TheBachelorette
— Katy Rochelle (@katyrochelle) August 7, 2018

This 'blew up' or whatever the kids say

I don't nearly take The Bachelor series as honestly or seriously as a lot of fans...I mostly just watch it to get a little drunk and blow off steam by watching people make horrible relationship mistakes...This tweet went mini-viral for whatever reason. So that's pretty cool.

Moment That Made Me Check My Pulse

Bradley Cooper. Lady Gaga. Ryan Gosling. Jodie Whittaker. Rod Stewart. All guests on the best talk show ever. I'm pretty sure I floated out of my body from all of my favorite people being in one place together.

I'm an insomniac, so there has been a lot of busy high-on-caffeine early mornings...but I'm pretty sure, I've never been so lit at 3am waiting for Beyonce to perform at Coachella. I'm still SPEECHLESS.

AMC was put in a tough spot last year when spoilers revealed that Andrew Lincoln was going to leave The Walking Dead. Instead of not being able to hide the news and let fans find out naturally, the channel does what it loves: milk moments for all its worth (which is like two seconds at the social-media-water-cooler). After months of being taunted that Rick's last episode was coming...and we all braced for impact that would be his death....and HE LIVED. HE LIIVVVVEEEEDDDD. Seriously, a week later, I was standing in Wal-Mart questioning: Why am I not depressed as ****? Oh yeah, that's right. RICK IS OKAY. Am I blessed? Yes, he lives to see another day in three movies I could care less about. But whatever. He's alive.

My Own Little Videos

Usually when I get ideas for anything, especially silly ones, I don't usually follow up on them. But these silly twitter videos came to mind, and I had fun figuring out how to make them. They mostly entertain me, but I had a lot of fun putting them together and hope more ideas come along in the future.

This post pretty much explains how I fell down the Taylor Swift rabbit hole. Reputation saved me so many times this year. Even though I didn't make it to see her in concert (and it still pains me to this day), Netflix made my dreams come true and the tour will be released on New Years Eve. My family thought this was a trend. Oh, they were wrong. I'M PSYCHED. THANK YOU TAYLOR.

Two announcements earlier this year had a lot of people doing a double take: Bradley Cooper was taking on the fourth remake to A Star Is Born starring alongside Lady Gaga. And John Krasinski was directing his goddess-wife Emily Blunt in A Quiet Place, a silent-horror-family-drama. To everyone's surprise, not only did their films do ridiculously well with critics, audiences, and at the box office, they also had a major glow-up. BCoop made an alcoholic-rock-country-god hot. And Big Tuna gave everyone Johnny Appleseed vibes with his beard and eight pack (or was that just me?). It was a good year for beards, my friends. I MEAN.....

Steve Rogers has always been a super snuggly cinnamon roll and then Marvel found my bigger weakness for moral men trying to do right in the world, and that's beards. Of course, they decided to take an actor who already has the Chanel, BMW and Cartier of faces and ordered him to grow a beard. Like how did Kevin Feige break into my diary???? Let's just hold hands and bow down to this beautiful man, sweet lord.
at December 15, 2018