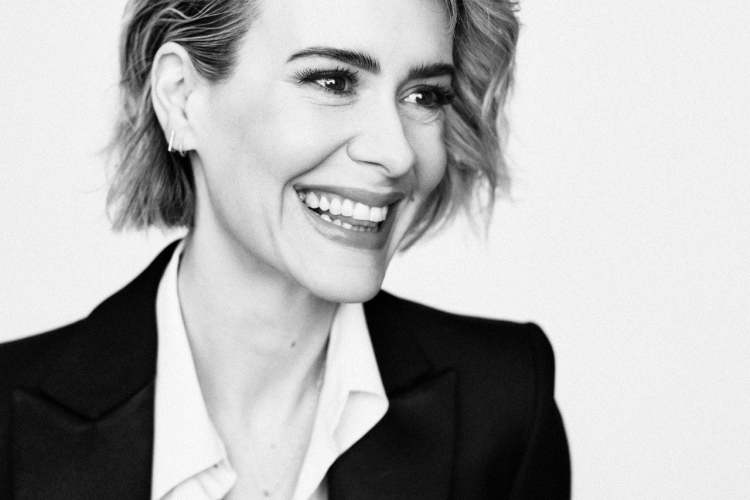 Usually when I begin my Stars I Love posts, I have all kinds of things to gab about and how much I love them. I have the same butterfly feelings for Sarah Paulson as I do for a lot of my past favorite stars, but I don't have any way to put my feels into words. It's strange because I could've summed up my love for Ryan Gosling as a human unicorn or Chris Evans as an adorable meatball, but instead, those posts went on for about 5,000 words total. And I just want to sum it up with: I love Sarah. So here we are.

Being speechless about Sarah is probably the reason why I'm in love with her. Having spent most of her life acting as much as possible, she's visibly one of the most talented actresses right now, but she didn't come into her fame or success until her forties. From television shows to indies, to now major Hollywood films, the Tampa native (the only good thing to come out of Florida, TBH) worked her way up the ladder just wanting to be a good actress. For years, she was existing on theater roles and pilots until someone came along to give her bigger opportunities (Thank you Ryan Murphy). All the while she kept questioning if she could really become a good actress. Her talent is one you have to see in action to get it.


Therein lies another reason why I love her: the humility. There isn't one iota of her that believes she's worthy of the success that has come her way, despite the fact she does deserve it. Not only does she transform from role to role, but her off-screen personality is absolutely hysterical, quirky, and humble. I think it's what makes her able to morph into different characters and mediums without a specific label of a type pushed on her. Despite the variety of genres that she's worked in, she's not recognizable from part to the next (this type of actress is not the rare-unicorn Hollywood wants us to believe). You combine the mystery she's able to have on-screen or on tv, and then her vibrant personality in interviews, and it's quite remarkable how talented, witty and charming she is.

A lot of people will also know her as an actress as well as an icon in the LGBTQ community. After Ellen Degeneres came out of the closet, lost, and then revived her career, there's been a subtle 'After Ellen' movement, where the next generation of figures from film, television, journalism, etc. carry the torch she helped lit. From accidentally coming out by kissing her then-girlfriend Cherry Jones at the Tonys, to her adorable relationship with Holland Taylor, Sarah's is one of the most significant parts of the next wave in Hollywood. Though Sarah's been in relationships with men and women and doesn't specifically define herself by a sexuality, she's become an inspiration to people who want to live their lives freely and not be confined by who they love. On top of which, Sarah lends her voice to different human rights and equality causes she believes in, so that gives us something even more to love: she's active in making the world a more inclusive place.

Like I said, blah blah blah, there are so many reasons why I love her.

Reasons Why We're Not Worthy Of Sarah Paulson

+ All of the videos above. Please watch them. She's pure gold.
+ My life motto: Eat a taco. Drink a beer. Donate some money. Don't be an ***hole.
+ Sarah's longtime girlfriend Holland Taylor gushing about her JUST UGH
+ She rapped Salt N Peppa's Shoop
+ "Being a person is not for the faint of heart"
+ Sarah and Stephen Colbert record a fan's voice mail message together
+ Whatever this interview was with Sarah and Cate Blanchett for Ocean's 8
+ The Mom Dance at a Wedding
+ Look at her in 2007 before she made it
+ That time Ellen scared Sarah like seventeen times on her show

Only a few credits into her film career, Sarah starred alongside Renee Zellwegger, Ewan McGregor, and David Hyde-Pierce in the satirical rom-com Down With Love. As a relative unknown, Sarah shows she's got what it takes to be a big star as the sharp-tongued, feisty friend of the Doris Day-inspired Barbra Novak who's taking on the publishing world, love and sexism. Unfortunately, because the film didn't do well at the box office or with critics, everyone side-swept how effervescent and funny she was. But Sarah shows she's a true gem early on, and honestly, really needs to go back to doing comedies.

Director Alexandre Lehmann and writer Mark Duplass explore the story of two exes rekindle and struggle over a complicated walk down memory lane. It's quite the cliche film, I'm not going to lie but A) the leads' chemistry is amazing. Not only do you forget the film only stars two people, but it has a real authenticity of feeling like a documentary as if the intense emotions they're experiencing are coming to the surface in the moment. And B) look at her in this beanie. I MEAN.....SO CUTE.

ot only is this the only spin-off in film history that I care about actually seeing, but Sarah also does a wonderful job as Carol's former flame Abby. Her role is almost minor in the film, but she does a great job of filling in the blanks as much as possible - you don't know a lot about her but you still care about how she fits into the big picture of Carol and Therese's relationship. Additionally, there are some deleted scenes that further develop what happened between Abby and Carol, which haven't been released yet and I would give anything to see.

Before Sarah became a star on American Horror Story, she often relied on tv pilots to get by. She didn't think she could become the actress she wanted to be because Hollywood still values beauty over talent (AND SHE'S SO BEAUTIFUL DON'T EVEN HOLLYWOOD). When Ryan Murphy saw how talented she is, it changed the game for her, opening up opportunities to play all kinds of characters on one show. Even if she is working with two heads, or Murphy's storylines are obnoxiously gratuitous, her performances are always stellar. Who can almost out-act Jessica Lange and hang in the big leagues alongside Lange, Kathy Bates, and Angela Bassett? It takes real talent for the actors on that show to be able to humanize the insanity of Murphy's ideas.

I'm begging you from the bottom of my soul, if you haven't seen People Vs O.J. Simpson yet, just go watch this. Even though we know how the trial turns out, every episode makes you question your own choice if O.J. did it or not. Here's a woman who wanted to take care of her kids and do her job, and it required her to defend a slain wife and her boyfriend in the midst of one of the biggest race and discrimination battles in U.S. history. Despite the rise of the TimesUp and MeToo movements, it also shows how the country turned its back on Marcia, demeaning, sexualizing, and disposing of her as a human being as the circus around the trial grew more and more out of control. There are so many layers to not only the show, but Sarah's performance is incredible. She's strong, vulnerable, determined, clever, dedicated, and heartbreaking. JUST UGH.
at December 17, 2018