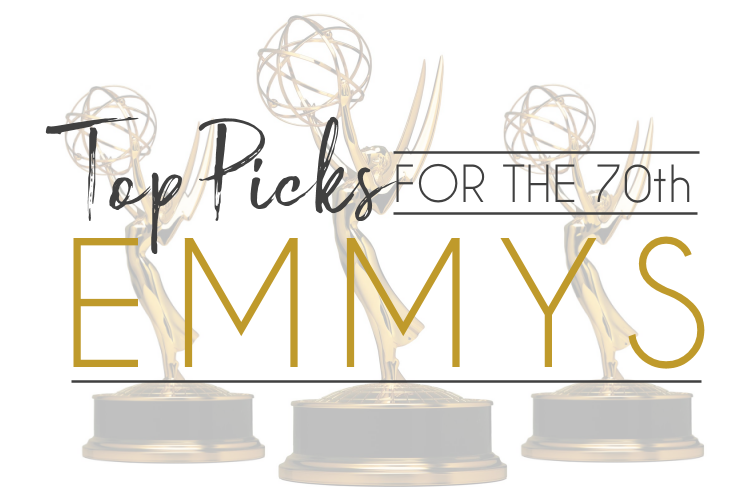 Summer is winding down, but the new season of television is just around the corner. Which means it's almost the biggest time of the year for TV land. On September 17th, 2018, the Emmy Awards will celebrate actors and series nominated by the Academy of Television Arts & Sciences. Will Donald Glover make history again? Will underdogs like The Americans have a chance to sweep? I thought it might be fun to share my top picks of major award categories (check out the full list of nominees here). Who do you hope will win at the 70th Emmys? Feel free to share your thoughts in the comments below!

From its controversial premiere to its abrupt cancellation and renewal, the reboot of Roseanne has been one of the biggest news and television events in 2018. Though the departure of its showrunner Roseanne Barr will surely be a talking point throughout the night, nothing should ultimately take away from the fact that the show's talented cast smoothly returned to their roles after a twenty-one year absence. Laurie Metcalf, who's arguably one of the most underrated and talented older actresses working today, came back to Roseanne's sister Jackie as if she hadn't left the role at all. Though she's snapped up four Emmys home for this character in the show's initial run, it'd be hard to believe she hasn't earned another for the chaotic renewal.

If Alec Baldwin takes home an Emmy for his portrayal of Donald Trump, could this be the big political move of the night? Not only is Baldwin an Emmys favorite, having been nominated and won multiple times for his role on 30 Rock, the actor often portrayed Trump in the openings of the variety show as cold-opens aka completely improvised skits. This 'win' could be another lock, especially if Hollywood wants to send a message to the White House. And, probably ignite the late-night twitter battle by Trump again.

This time last year at the 69th Emmy Awards, Ann Dowd actually didn't have a lot of competition within her own show The Handmaid's Tale. Alexis Bledel wasn't nominated in the Best Supporting Actress category; she was nominated and won Guest Actress in a TV Series while Yvonne Strahovski's role just missed out for her own nomination. While I think Dowd might win again for the second time in a row, Bledel could surprisingly have her name called, or perhaps even result in a tie?

Stranger Things's first season took the tropes we initially believed about its characters and twisted them upside down. Hopper transformed from as a disinterested sheriff doing his best to solve the case of a missing kid into a caring father-like figure with a tragic past. In season two, Harbour was able to expand that arc as Hopper struggled to take care of Eleven he had to tell Mike in order to protect his friend. After some coffee and contemplation, it'd be nice if Stranger Things started bringing home the big prizes to Hawkins, Indiana.

One of the little shows that could might be The Marvelous Mrs Maisel on Amazon. Centered on a young housewife who breaks gender roles by discovering her talent as a stand-up comedian, Rachel Brosnahan has perfected her character's comedic timing. While Issa Rae on Insecure also shines a light for female empowerment and is another top choice to win this category, Brosnahan's win from the Golden Globes earlier this year might be unstoppable.

Honestly, Donald Glover is one of the most talked-about creative minds in Hollywood and the music industry right now. Last year, he made history winning the Best Actor in a Comedy series as well as Best Director. Atlanta sharply and creatively weaves so many relevant themes of race and politics together, while his comedic timing is absolutely point. He has to be a lock to win. Case closed.

There's plenty of competition in the Best Actress in a Drama category this year. At first, I assumed that previous winner Elizabeth Moss for The Handmaid's Tale might strike again (she won last year). But then I realized Sandra Oh for Killing Eve is nominated too, and that's all the rage right now. Not only is she making history as the first Asian woman to ever be nominated in this category, her performance as Eve has been absolutely killer.

Best Actor, Drama: Milo Ventimiglia, This Is Us

We can always count on This Is Us to tug on our heartstrings, and a big reason for this is the connection of the family which runs throughout Jack and Rebecca Pearson to their children. After two seasons of mystery looming over how the Pearson's patriarch passed away, the reveal was finally made, and to the surprise of no one, was absolutely heartbreaking. The father's connection to his children have been an emotional centerfold throughout the series, and it's about time that Milo's performance is finally recognized. Even if Mandy Moore continues to be snubbed for Best Actress.

While everyone else was having a not-so-good-2017, a god who walks amongst us mere mortals Donald Glover made history at the Emmys. While Atlanta will win on many of its own merits such as writing, themes, and direction, the chances of the series winning this year feels even more tangible since Emmy favorite Veep (which won this category for the past three years) has been taking a production break. Excluding Glow on Netflix, another underdog frontrunner, I find it hard to believe that any other series will walk away with the top prize.

Could 2018 finally be the year for The Americans comes out on top? especially against all of the other titans nominated- The Crown, Game of Thrones, The Handmaid's Tale, Stranger Things, This Is Us, and Westworld?A part of me truly thinks it could. Since the beginning of the series, it's gained traction season after season all the way up to the series finale. While the rest of the nominated shows still have enough time to enter next year's race, this is The Americans's final bow. It's not only been hailed for its writing and direction, but both of its leads Keri and Matthew have been recognized at the Emmys before. I find it hard to believe this show, which has grown its own huge following, won't get the recognition its earned. I'm rooting for the underdog.
at August 04, 2018