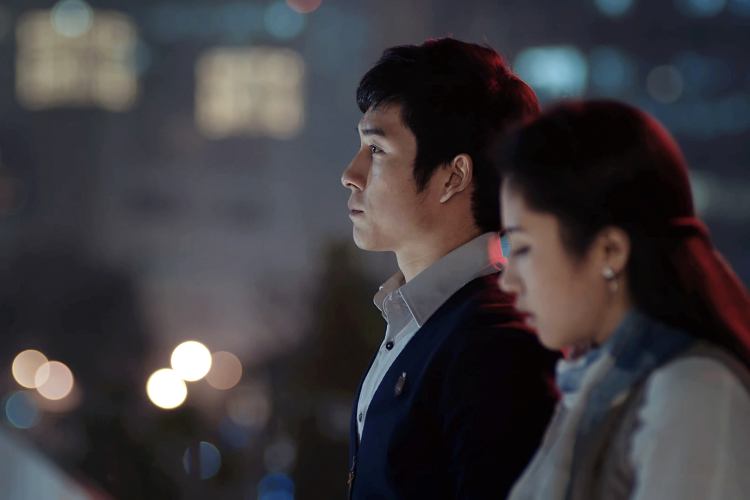 When we in fall in love, we tend to make a lot of promises. But what happens when love itself can't be kept? Director Michael Wong makes his directorial debut with The Story of 90 Coins, a beautifully composed short film exploring the complexity of falling in love - how it is a commitment, the fresh spark between two people, and the complications of regret.

Wang Yuyang (Han Dongjun) wants to be with Chen Wen (Zhuang Zhiqi), an aspiring fashion designer, for the rest of their lives. But she doesn't feel the same way. At first, he makes a promise to prove his love to her for 90 days. Every time they meet he gives her a coin. At the end of the deadline, if she still feels the same way they will merely use the coins to toast each other farewell. Otherwise, they'll eventually use their collection to get married. Along the way a relationship blossoms and the promise of the coins falls away. But Chen isn't fully committed in the relationship as he is; she's aiming to own a house in the city and take her fashion career to the next level, thus calling into question what happens when love needs to be more than a promise.

For a film that runs less than ten minutes, it's simple and straightforward as well as absolutely charming and sweet. While jumping into this world, the production design lusciously takes the frame of a theatrical motion picture. Han Dongjun and Zhuang Zhiqi are captivating leads as they explore their characters similarities and differences. It's easy to feel everything they do throughout the highs and lows their on-screen relationship.

It's difficult not to walk away from this story without harboring a lot of feelings to ruminate. The coins act as their "in" for falling in love and marking the wonderful memories they made. A promise of love is alluring and might lead to a grander experience, but relationships also require understanding and engagement from both sides. The parallel of Yuyang and Wen falling in love and growing apart tugs at heartstrings in all of the right places.

The film fills in a lot for nine and a half minutes, which works for and against the movie's favor. As simple and poetic as the simple piano score by Wei An is, at times it felt distracting and repetitive, taking me out of the journey portrayed by the actors. The other issue belongs slightly to the script which crops up a lot of questions about the couple without feeling like they're properly answered. The story itself could've used a bit of fine-tuning in terms of conflict or exploring more of the disconnect between Wang and Chen. Depending on where your heart lies on whether or not the couple should stay together, the ending can feel abrupt. But otherwise, there's so little significant downfalls to pick on.

As a directorial debut, The Story of 90 Coins is an impressive short film. Wong and the cast have earned top prizes at prestigious festivals around the world since it premiered in 2015. Having previously been an art and creative director in advertisement, there are influences of that industry throughout, but the short still manages to be remarkably well-rounded. Speaking to the complications and joys of falling in love, the story is truly touching with two talented leads and gorgeous production design. To watch The Story of 90 Coins, it's available on Vimeo.

Email ThisBlogThis!Share to TwitterShare to FacebookShare to Pinterest
Labels: film, short film, the story of 90 coins