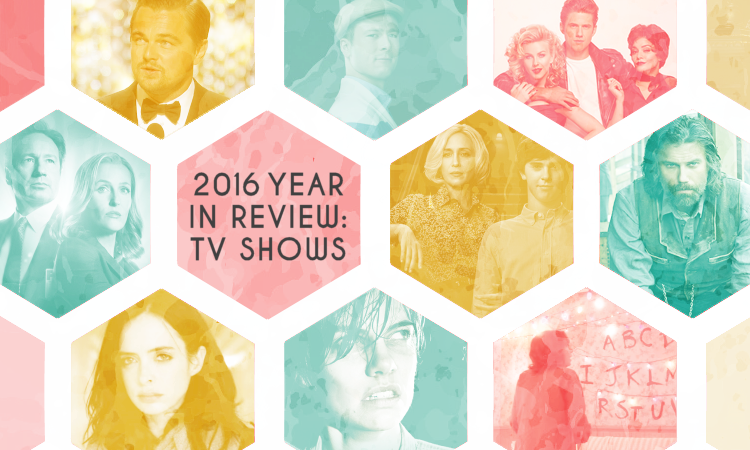 Television had many highs and lows in 2016. What show were you excited to see return? What was the worst character death? Some of these have been answered in categories for worst, favorites and best from what I watched have been compiled below. Spoilers ahead for the following shows: The X-Files, The Walking Dead, Bates Motel, Hell on Wheels, Jessica Jones, Scream Queens, Stranger Things. Hope you enjoy!

(gif)
Disappointing "Comeback": The X-Files Revival
The build-up was fun. Granted, the show tried to do it's best of balancing Cancer-Man and episodic mysteries, but as usual, their efforts just led to a cliffhanger. Who would've though Joel McHale's monologue citing the governments' systematic population control was the best part of the min-series and pretty much summed up the entire ten year run. I wound up lost trying to review the new episodes. Unless it comes back for season eleven as rumored, I just didn't see the point....

Why Am I Still Watching This?! Show: Scream Queens
The promos made season two look so wildly promising, but the writing failed to make nutsos running the asylum exciting or even maintain the dark humor from the first season. Once Chad was killed, I bowed out and didn't look back.

Tv Show I Survived Because He's Hot: Hell on Wheels
Two words: ANSON. MOUNT. For a show about men racing to finish the First Transcontinental Railroad, the story went nowhere fast. Heck if he wasn't a damn fine view.

Annoying Character I Ended Up Rooting For: Steve, Stranger Things
He was a real jerk for 80% of the show, but he proved to be not-so-bad in the end. *raise your hand if you still think Nancy should be on her own, study for tests and kick ass*

Most Annoying Characters:
Neighbors, Jessica Jones
A lot of people thought Ruben and Robyn were quirky, but I just found them plain annoying. It was maybe sad for a second when Ruben was killed, but my first impression of Robyn didn't improve. I just wanted her to disappear.

I Thought I'd Miss This Show but Didn't:
Bates Motel
Bates Motel is a terrifying dive into the relationship of Norma and Norman, but the latest season boxed in Norma too much. Her horrific abusive past was wrongfully held against her by weak antagonists, a healthy romantic relationship wad destroyed, and then she was killed off. She lives on in Norman's psyche, but it's a bit repetitive. The next season will be it's last but I'm interested to see where it goes.

Most Over-hyped Moment: Negan
Did the hype or Jeffrey Dean Morgan kill Negan? All of the excitement puttered out in the premiere for me and never fully recovered. Morgan's acting choices are over-the-top and cyclical remaining in a bubble that doesn't connect with the other actors or characters. Negan could've easily been dynamic like Kilgrave in Jessica Jones (see below in Best). But his ~charismatic creepy vibes~ are more like a cardboard high-school bully you don't take seriously. He was just so over-hyped and under-delivered.

(gif)
Comeback: Shane McMahon, WWE Raw
Seven years ago Shane McMahon left his father's company for realz in 2009 and venture into business on his own. Who knew he would ever come back, but when he did, it was the jolt the fans needed. The programming around him versus the Undertaker wasn't great, and his prolonged presence hasn't reached the same excitement, but Shane McMahon's comeback is still the most memorable moment of the WWE calendar this year.

Fictional Death I Totally Rejoiced In: The Swede, Hell on Wheels
It's so rare, maybe even unheard of, for a show to have one main villain versus the anti-hero for a whole series. But Hell on Wheels managed just that. It struggled to do it well, sometimes recycling the Swede's hide-and-hunt games, but when he died - it was absolutely brutal. AND A LONG TIME COMING, and I was pretty satisfied with it.

Completely Unexpected Favorite: Grease! Live
I love the movie and didn't know what to expect when FOX made the musical it's next live project. But the turn-out was surprising - the singing was catchy, the direction was super impressive, the actors had stamina from beginning to end, and some of the story changes from the movie were fitting. I like watching it as much as the movie.

I Didn't Know I Needed This In My Life: VEEP
The Office + politics. I can't believe how long it took me to get into this show. It's glorious and everything I could pretty much need. Selina Meyers = GODDESS.

(gif)
Female Driven Show: Jessica Jones
Jessica Jones is such a bad-ass and power of strength in her own right, but combine her relationship to Patricia Walker, and the show is just that much more female-driven. It certainly doesn't hurt that Krysten Ritter and Rachel Taylor's chemistry is so good. I can't wait to see them have each other's back next year.

The Michael 'Well This Is Gonna Hurt Like A MotherF*****' Scott: Season 7 Premiere, The Walking Dead
Five months of waiting, or even more so two seasons of not-so-obvious easter eggs, and it all came down to one brutal, agonizing, hour. Losing Glenn and Abe hurt. It hurt so bad. It hurt like a mother******.

Couple: Glaggie, The Walking Dead
Glenn and Maggie survived devastation like insane escapes from walker kills, kidnapping, her families' deaths, pregnancy scares, and joy like living together, making allies, and finding out they were pregnant. They were leaders to others, held each other up for strength, comfort, forgiveness, hope. Witnessing such a power-duo come to an end in the premiere was devastating, but it was beautiful while it lasted.

Confirmation of Richonne was monumental too.

I Ship These Two, So Sue Me: Joyce and Hopper, Stranger Things
There's so many possibilities in season two, but there was so much left unspoken in the first season - the claustrophobia of their small town, Hopper's past and being a possible father-figure to Eleven and Joyce's sons, them rallying to find her son - they were just amazing. Jopper 2017 ya'll.

End of an Era: Leonardo DiCaprio Wins It ALL
No more Leo Oscar jokes - at least ones of him not losing anymore. I'd be hard-pressed to think of another wild award show season - from the Gaga escapade at the Golden Globes, his and Kate's appearances on the red carpet, to actually winning, joking backstage about having to maintain and water the Oscar 'cause it came with a maintenance guide,. My 13 year old self would pass out knowing both of my boys have Oscars.

(gif)
Best Performance by a Supporting Actor: Steven Yeun, The Walking Dead
As much as I am convinced this show couldn't be made with Andrew Lincoln, the same counts for Steven Yeun. His work with Glenn is exceptional, as a character who gave so much hope, joy, resilience and strength to millions of fans. A huge hole has been made in the series since his absence.
Best Performances by Supporting Actresses:
Sonequa Martin-Green, Lauren Cohan, & Melissa McBride, The Walking Dead
Sarah Paulson, American Horror Story: Roanoke
From season six to season seven Maggie, Sasha, and Carol's journeys have grown so much as characters and actors, they had a lot of subtle and traumatizing moments to prove their acting chops - The Same Boat, The Day Will Come When You Won't Be, Go-Getters. Season seven lagged for Melissa, but Lauren and Sonequa, and their characters' friendship, gave so much life to the series after the premiere. After facing so much loss, they've stood up in grief, supporting each other, and preparing for war. These characters are such fierce warriors, I feel stronger and more capable by watching them triumph.

Sarah Paulson played three roles in American Horror Story: Roanoke, and she was hysterical, fittingly over-the-top, and bad-ass. She sparked an interest in me to see what else she's done in previous seasons. Only pure talent can do that.
Best Performance by an Actor: David Tennant, Jessica Jones
Most of us know David Tennant as the Tenth Doctor and a lovable enthusiastic person on-and-off screen. This familiar charisma made his turn as the abusive rapist and stalker Kilgrave truly disarming. Many villains are manipulative but likable or redeemable to a point, but Tennant rarely loses the 'nice-guy act' making it easy to forget what a reviling sociopath Kilgrave is. His sense of humor made him "normal". His tortured past makes it seem like he wasn't born evil, it was made. Only his act would switch around again, and you'd realize how easily he'd cast his telepathic spell on anyone to use against Jessica. It's a truly creepy character and performance.

Choosing Tennant as Kilgrave as a Best Performance was difficult. I didn't want it to seem like I was condoning his character. 'Cause I can't and don't. But in the end, Tennant still gave a terrifying, memorable performance. Take notes The Walking Dead.

(gif)
Best Performance by an Actress: Millie Bobby Brown, Stranger Things
Runner Up: Winona Ryder, Stranger Things
Millie Bobby Brown was a complete revelation. Eleven was more than just an experiment; she was a hurt, amenable, trusting child and Brown brought such warmth, naivety, and strength. Runner-up was the fierce and protective love of Joyce, which brought about the Winonassiance.

Best Show: Stranger Things
The summer was so dry of tv entertainment and disappointing movies which failed to blockbuster hits. Out of nowhere came an amazing resurgence of nostalgia and mystery with Stranger Things. The first season was filled with entertaining characters who couldn't be boxed into typical tropes, fun twists, and homages that took us back to a different time in entertainment and life. It didn't have a bar to surpass for the year but it certainly set one for 2017. Let's hope there's another revitalizing fandom awaiting us all next year.
at December 31, 2016