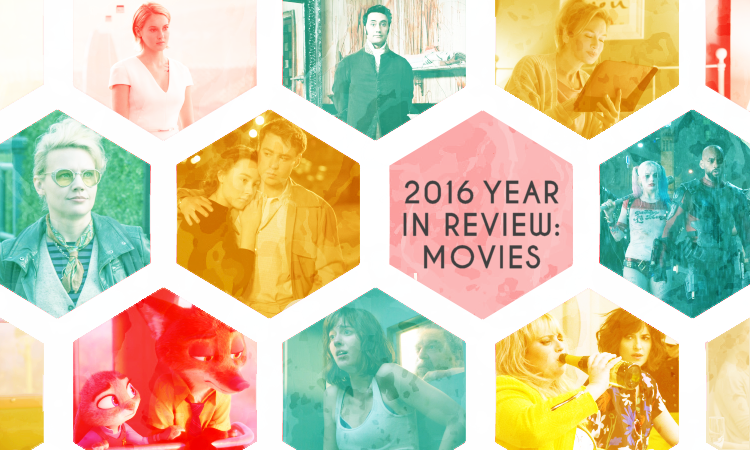 2016 was a strange year for movies - so many landed on my to-watch list for 2017 because of their limited releases, and what memorable movies I did see felt few and far between. In all, I watched about 50 flicks which beats last year's total but I plan on seeing a lot more next year.

Below are my favorites and picks for Best Of from what I've seen so far. When a movie is pretty bad, I tend to forget about it pretty easily - so there's no worst category here (unlike my 2016 tv post).  I hope you enjoy my picks of characters, couples, and genres. What were your favorite movies? What movie surprised or disappointed you? Let me know your favorite movies of 2016 in the comments!

(gif)
Is This Body For Real, Yo?: Chris Evans, Captain America: Civil War
*Looks towards the heavens.* Well, done.

Mr. Nice Guy: Tony, Brooklyn
Having seen this in early 2016, and it was a favorite of mine this year, I'm only putting Tony here - cause I just couldn't forget him. Tony was endearing and patient. When Eilis faced going home to Ireland to see her mother, he didn't bulldoze with other possibilities for her to stay; but gave her options that if she wanted to return, there was a future waiting for her. He was understanding and waited eagerly for her to come home - if she ever did, there wasn't a guarantee. Emory Cohen was highly underrated for how kind and sweet his performance was.

Heroines: The Bennett Family, Pride and Prejudice and Zombies
Ghostbusters squad
Michelle, 10 Cloverfield Lane
As many setbacks as Hollywood has, movies are gradually growing capable, complex heroines. The Bennett Family had a zombie apocalypse hot on their heels, so all of siblings trained for combat. Their slice-and-dance skills were put to the test to protect each other, Mr. Collings, and even Colonel Darcy. The new Ghostbusters squad had each other's backs taking out NYC's creepiest ghosts. And, Michelle was instinctual, resourceful, and determined in 10 Cloverfield Lane as she battled for freedom against her captive. All of these movies proved women can kick ass for themselves, with or without or for men, and for each other.

Hero: Mark Darcy, Bridget Jones's Baby
*SPOILERS FOR BRIDGET JONES'S BABY*
My biggest fear of 2016 movies thankfully never came to light. Contrary to my worries, Bridget Jones's Baby was amazing, Though Mark might've faced off against Daniel in the past, nothing compares to him and Jack carrying her over the finish line as she goes into labor. That last half-hour was hilarious. But also, I loved how he talked to her while she was in labor and was by her side. He was an absolute hero.
*END SPOILERS*

I'd Love to See a Remade Sequel to: Independence Day: Resurgence, The Divergent Series: Allegiant
After a ten-year wait Resurgence tried so hard to shoot for the stars with intricate worldbuilding that came off as lazy storytelling and flat characters. It horribly missed the mark of going back to its roots and be a good action-packed alien flick that didn't take itself so seriously.

As for Divergent, it's a massive disappointment the studios adapted nearly all of the third novel but were too selfish of wanting a fourth movie to finish off the series. Now with Lionsgate's plans to make it a tv series, and the cast having other obligations, it's a shame this tiny fanbase can't just get the ending we deserved.

Comedy/Mockumentary
Movie I Survived Because He's Hot: What We Do In The Shadows
Okay, not really. But this movie is hysterical. And this quote often pops up in my head and makes me laugh. I guess I kinda survived the lazy movie year 'cause I can watch this over and over again - it never gets old!

Hot Mess: How To Be Single
I just don't know what to think of this movie, and I saw it a few times, and still kinda love listening to it in the background. The story and script is all over the place, and there is just not enough of Dakota's Johnson character with Rebel Wilson and Leslie Mann as there are of Dakota getting played by assholes - but there's some pretty funny moments and whatever - I just love Dakota .

Couples: Elizabeth and Mr. Darcy, Pride and Prejudice and Zombies
Runner-Up: Bridget Jones and Mark Darcy, Bridget Jones series
"Yeah, my boyfriend's pretty cool but he's not as cool as me" - Lana Del Rey's lyrics always come to mind while watching PPZ's version of Elizabeth and Darcy. Lily and Sam's chemistry was so good, and I loved how their relationship was structured by being equal zombie fighters. Mr. Darcy was moved by her intellect as well as skills on the battlefield which was so bad-ass. And I can't leave out the other essential version of Pride and Prejudice with Bridget and Mark in their third Bridget Jones movie.

(gif)
A-Okay: Me Before You

I loved the book, but didn't know what to think of the movie as much as I was excited for it. Emilia and Sam were wonderful, though I felt the story missed out on some of their important moments of development and understanding. It was okay enough to like it and watch occasionally - especially for the scenery and Louisa's wardrobe. *drools*

"Horror": Pride and Prejudice and Zombies
Me and my sister were excited for this, and it did not disappoint. It's not necessarily a horror but it has plenty of action sequences and the zombie-aspect (I guess) lumps it into the horror genre. I so want a sequel because these robust heroines could use another-go. Crossing my fingers.

From the premature heat from haters to the mixed reviews, I didn't know what to expect. It's not that I'm a huge fan of the original but have seen it enough times to be able to quote it forwards and backwards and appreciate it's status as a classic. The new one had to be different and fun, not try to compete with the original, and it was worth the hype.

Rom-Com: Bridget Jones's Baby
As far as rom-com sequels go, they're pretty rare and usually a disaster. But with a pretty decent script, the original director back at the helm, and allowing Bridget to be her usual scattered self but also matured was exactly what the trilogy needed. SO LET'S JUST END THE SERIES HERE UNIVERSAL PICTURES. THE ENDING WAS PERFECT.

Best Animal: Steven Seagull, The Shallows
The Shallows was a bit predictable but Blake Lively held her own against a CGI shark. Unfortunately, she was slightly upstaged by a breakout star Steven Seagull - who actually had quite a lot of charisma for a non-CGI animal.

Best Supporting Actor: Ezra Miller, Fantastic Beasts and Where To Find Them
It's difficult for me to say, but I'm not quite sure where my level of interest in the Harry Potter spin-off would've been without Ezra. Graves and the Barebone's dark story didn't quite mesh with Newt's lighter escapades around New York. From his idolization towards Graves, his broken posture, the abuse he endured, and the longing looks of being anyone but a Barebone, and then exploding into that Obscurus, you could just feel all the rage and pain that Credence held in. Ezra was so captivating. I just wanted to see more and more of him.

Best Supporting Actress: Margot Robbie, Suicide Squad
Same thing goes for Margot Robbie as Harley Quinn - her live-action performance was straight out of the comics and animated shows. She was so well-rounded in maintaining "her two selves": the vulnerable, passionate former psychiatrist as well as the off-her-rocker, clever, boisterous Harley. Her performance was one that DC fans have been waiting for forever, and she lived up to the hype (if only the movie did the same).

(gif)
Best Actor: Chris Evans, Captain America Civil War
This might be a bit of a stretch given the promising round of Best Actor roles coming for the award show season, but to me, Chris Evans as Cap is one of those perfectly cast superhero roles. From his own franchise to the Avengers movies, his Steve Rogers  is spot-on despite the change in directors and writers; he was idealistic, heroic but grounded and stable in struggling with life and the world after World War II, facing Hydra and trying to save Bucky; he wasn't a caricature, which given everything Rogers is throughout the comics, he could've been. Civil War is more of an ensemble action film than it is Roger's solo journey, but we never lose sight of his conflict and dedication to Bucky or how he sees the world/the Avengers. It's nice to see Cap go out on top, and I'm not sure in a future franchise, someone could do better.

(gif)
Best Actress: Ginnifer Goodwin, Zootopia
Runner-Up: Amy Adams Arrival
As much as I love Adams in Arrival, one of my biggest frustrations with animated movies is when a celebrity's voice distracts from the character and who they are trying to be. Sometimes an actor sounds like they're just being themselves instead of the animator's creation. Despite being familiar with Ginnifer from Once Upon A Time, she didn't detract from story. Not only did the animators adapt her facial expressions and mannerisms to a tee, but she gave gave Judy naivety, warmth, and hopefulness. I didn't feel like I was focused on her as an actress, but Judy's journey with Nick. The combination of the animation and Ginnifer created an underrated performance.

Email ThisBlogThis!Share to TwitterShare to FacebookShare to Pinterest
Labels: best of 2016, lists