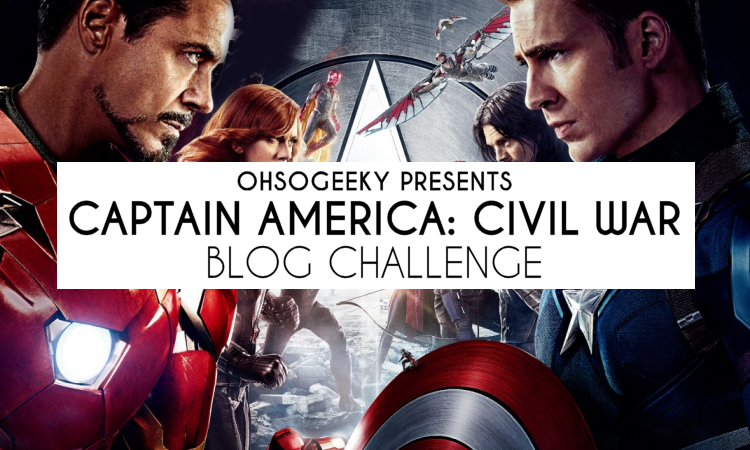 You're facing an epic battle against five extraordinary fictional opponents - all with superhero, magical, or supreme physical powers. You have your pick of partners-in-crime (justice, vengeance, etc.) to stand by your side and help you win. Who's on your team?

Since Civil War is rapidly approaching, I thought it'd be fun to do a related blog challenge. Pick any five fictional characters you would want on your team. They can be from any book, movie, tv show or comic - doesn't have to be from the Marvel universe. What would they bring to the team and how would you lead them to victory? Be as creative as you would like!

Below are my personal picks! If you want to take part in this challenge, feel free to make a post of your own (and send me a link) or comment! I'd love to read your picks!

Captain America
Sure, he has the body proportions of a Dorito. But nobody can really argue that he is one hell of a leader. He shows tact and diplomacy when voicing his opinion. People, superhuman or not, aren't perfect, and that's what keeps him human and grounded. He'd be a great voice of reason, fighter, and always has his friend's backs. Did I mention I was Team Cap all the way?

Ginny Weasley
Movie!Ginny is pretty cool, but Book!Ginny is 100x more complex. Next to Harry Potter, she suffered pretty heftily from Tom Riddle's destruction and managed to persevere almost unscathed. She survived the Dark Lord possessing her for a whole school term! That shows some insane resilience. She's outspoken and a capable warrior in battle and Quidditch. Ginny all the way!

Trinity
Let's just forget about her romance to Neo and her silly fate in The Matrix series. Trinity is awesome. The first movie opens up with her kicking butt all on her own. She proves to work well on a team and on her own. A computer hacker, skilled martial artist and fighter, weapons specialist, and can slow down time to kick ass and take names. Sign her up to my team!

Belle
She's a little bit of an out-there choice, but am I gonna need someone who is good at researching and thinking outside the box? Who knows! Belle (Once Upon A Time version) knows how to dig deep to find the answer. Trinity can handle any and all computer hacking while Belle looks through any kind of print archive, books, maps - you name it. She's more than the idealist adventurer people peg her to be and is totally capable of handling herself against mean beasts.

Poe Dameron
Poe is a decorated X-Wing pilot and rebel fighter. He's one of Leia's most trusted operatives. He was raised by his rebel-fighting parents to defeat the dark side. It's great to have some man and woman power on the ground, but the open skies need to be covered too. How awesome would it be to see a starfighter soar overhead in victory? Go team go!
at April 17, 2016