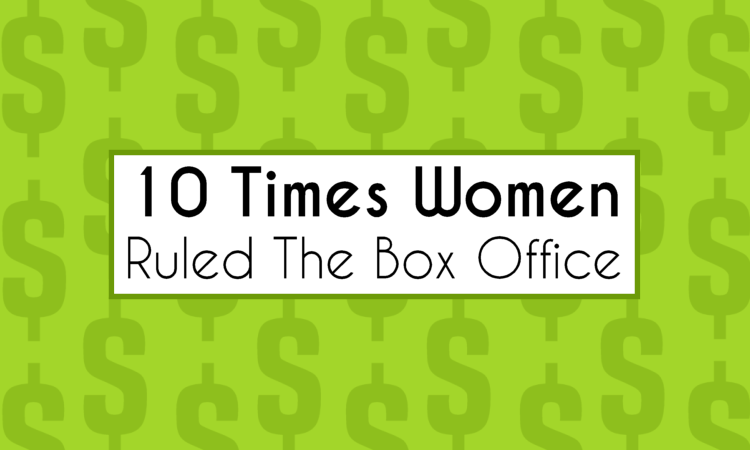 Audiences and critics alike have been clamoring with more women-centric casts in movies. It's not that casts with a superior male cast are in the wrong. Their films have done well for the past 100 years of cinema. But there simply not just one type of hero's journey people want to see all the time.

From the Sony hack emails to the constant fight by industry insiders to get women in an equal position of power, it's not a secret that Hollywood struggles putting women in diverse movies and roles.

Since the beginning of film-making, women like men have proven their worth not only in money but versatility. From princesses to warriors, and in genres from comedies to action, leading women have racked in millions to almost billions of dollars in ticket sales.

Hollywood has plenty of talented actresses, directors, and writers "at their disposal". The issue isn't that they aren't available or that audiences don't want to see them or they aren't critically acclaimed. The big movie studios just don't think that women can pull in the box office numbers.

Here's the thing: They do.Countless films with complex female leads have been successful in terms of pleasing moviegoers, critics, and making good bucks. Taking a closer look at the numbers, here are ten examples when women ruled the box office.

Women carrying leading roles is not a failed Hollywood experiment. In cinema's heyday, talented and hard-working actresses like Bette Davis fought to gain pay equality and stronger complexity for her on-screen roles. As the decades rolled on and icons of Classic Hollywood faded away, the presence of matured women in film gradually disappeared.

It wasn't until 1991 that an unexpected hit revitalized these long forgotten contributors. In Thelma and Louise, two middle-aged best friends embark on a road trip with criminal consequences. Domestically, the film pulled in $45 million. It also garnered six Academy Award nominations, including nods for its stars Geena Davis and Susan Sarandon. Callie Khouri took home gold for original screenplay.

Today, audiences and critics continue to respond to the film's feminist message exposing the chauvinistic nature women often endure by their spouses, and men in general, solidifying the importance of sisterhood.

In 2011, a quiet adaptation took the reins from blockbusters, remakes, and reboots. The Help by Kathryn Stockett topped the New York Times’ Bestsellers List for 100 weeks. Set in Mississippi during the Civil Rights movement, three African American maids attempt to unveil their racist employment to white housewives.

The film earned $5 million on its opening day and continued to grow through word-of-mouth by audiences and critics. In twelve days the film jumped to $71.8 million. It became the #1 movie in America toppling Conan and Rise of the Planet of the Apes.

The comedy genre's reputation as a boy’s club was put to the test with the 2011 filmBridesmaids. Directed by Paul Fieg, competition sets to ruin a bachelorette party when the maid-of-honor and a bridesmaid fight over who is the brides’ true best friend. Upon its theatrical release, the film received critical acclaim and made break-out stars out of its cast Rose Bryne, Melissa McCarthy and SNL alumni Kristen Wiig.

Bridesmaids was lauded for breaking feminist ground in the comedy genre with critics claiming women could be as raunchy and talented as their male counterparts. Producer Judd Apatow, who directed two man-boy centered comedy hits 40-Year-Old Virgin (2005) and Knocked Up (2007), had his highest-grossing box office record broken by Bridesmaids. At the box office, the film made $169 million in the United States and $288 million worldwide. As for audience demographic, up to thirty-three percent of the audience was men proving laughter isn't gender-bias.

In 1936, Walt Disney Productions teamed up with RKO Studios to produce the first color and animated feature length film.

Based on The Brothers Grimm fairytale, Snow White escapes the Evil Queen and takes refuge with seven dwarves in an enchanted forest.Though a damsel in distress being saved by Prince Charming has become all too normal for female characters, in the late 1930s this was an entirely new concept in film. A princess yearning for her heart's desire and finding happily ever after with a prince captured audience's imagination.

The Academy Awards rewarded Disney's vision with an honorary Academy Award in 1937. For its original theatrical release, the film made $8.5 million. Through theatrical re-releases Snow White and the Seven Dwarfs has grossed $200 million. Other princesses that went on to earn big include but are not limited to The Little Mermaid (1989), Beauty and the Beast (1991), and Brave (2012).

In 2001, Angelina Jolie played Lara Croft, a skilled adventuress racing to recover an ancient talisman from the hands of a powerful secret society. Her character challenged the typical gender roles within the action genre where women were often treated as a sex-object or damsel in distress. Croft was inquisitive, beautiful, and a physical bad-ass.

Lara Croft: Tomb Raider excited audiences, pulling in $131 million in the United States and $274 million worldwide.Jolie became a household name around the world. The sequel Lara Croft: the Cradle of Life wasn't critically panned but it still totaled $156 million worldwide.

Since the Croft franchised concluded, Jolie continued to star in action films among other genres, continually elevating her worth at the box office. For Salt, a story of an agent gone rogue was originally intended to be played by a male actor. Instead, Jolie convinced the powers-that-be she was right for the part. In turn, the movie earned $300 million worldwide.

Jolie is even used as her own category because the emergence of Croft began a new wave of women in action films; her involvement as an action star continued the legacy of other actresses such as Sigourney Weaver in the Alien franchise. Additionally, it would be right to include other women such as Scarlett Johansson who has a pivotal role in action portraying Black Widow in the Marvel franchise.

Mamma Mia
Musicals are a powerful resource for audiences looking to become dancing queens in their own lives. In 2008 the Broadway hit Mamma Mia, based on pop band ABBA’s discography, burst onto the big screen. Starring Meryl Streep and Amanda Seyfried, a mother-daughter duo prepare for the young woman’s impending marriage as the mother’s previous boyfriends make an unexpected arrival.

With three-time Academy Award winner Streep at the helm of a playful and family-friendly musical, Mamma Mia broke records as the highest grossing live action musical. Though Mamma Mia had a “meek” $52 million budget, the box-office racked in money, honey. Its domestic gross was $144 million, and worldwide the film earned an impressive $610 million dollars.

The previous highest-grossing live action musical was the Broadway-hit Chicago (2003). It's about two jailbirds who vie for the spotlight after murdering their husbands. The film was nominated for a dozen Academy Awards and took home gold for Best Supporting Actress and Best Picture.

In 1990, then-unknown actress Julia Roberts was put on the map with Pretty Woman. Roberts played a down-on-her-luck prostitute who agrees to be an escort for a wealthy businessman, played by Richard Gere. Their romantic relationship takes her off of the L.A. streets and into his arms. Not intended to be a romantic comedy at first, the film was set to be a dark drama examining the sex-worker industry.

Given a bigger budget, a change in tone geared towards romantic comedy, and with the weight of Walt Disney Studios behind it, Pretty Woman became a box-office hit. Though critics criticized the film for its reputation as a distorted modern-Cinderella Story, Roberts instantly became an American Sweetheart. She was nominated for Best Actress for an Academy Award. Pretty Woman was also one of the biggest money-makers in 1990. In the United States, the film grossed $178 million and $463 million worldwide.

After the mega-film franchise Harry Potter concluded in 2011, several young adult franchises tried to replicate its success but failed to make the cut. The next best franchise etched in audiences' minds is The Hunger Games. Based off the best-selling series by Suzanne Collins, the four-film series follows Katniss Everdeen, a young woman who sparks a revolution when she is forced to compete in a series of deathly games led by a dictator. Jennifer Lawrence’s career was launched as a powerhouse star.

For three consecutive years the series remained at the top of its game. The first installment The Hunger Games (2012) brought in $408 million. Its first sequel Catching Fire (2013) proceeded with $425 million. Its third installment Mockingjay Part 1 hustled in $337 million. In 2015, the final film Mockingjay Part 2 grossed a cool $101 million in the U.S. "The girl on fire" grossed nearly $2 billion dollars total worldwide.

Animated films are an easy draw for families looking for wholesome entertainment. The colossal hit Frozen is no exception. In 2013, the powerful bond of Queen Elsa trying to break free of the fears her magical powers are capable of, while her loving sister Anna tries to help, took the world by storm. Produced by Disney, the film skyrocketed to the top of the charts and warmed millions of audiences' hearts.

Gone With The Wind

During its initial release, the film broke attendance records - first in America and then in Europe. MGM Studios basked in their success and didn't pull the film for four years giving it time to earn $32 million. It was the most profitable film at that time. Additionally, the film won several Academy Awards including but not limited to Best Actress, Best Director, and Best Picture. The most prolific victory of the night Hattie McDaniel winning Best Supporting Actress. She was the first African-American to win an Academy Award.

As the decades have passed since it's initial release, the film's re-releases increased its earnings. In total, the film grossed $390 million at the box office. When adjusted for ticket inflation to current prices, Gone with the Wind earned a place in 2014’s Guinness World Records with a monumental $3.44 billion. Certainly, with this and other impressive records paving their way at the box office and breaking records, audiences and critics give a damn about who and what we see in films.
at April 14, 2016