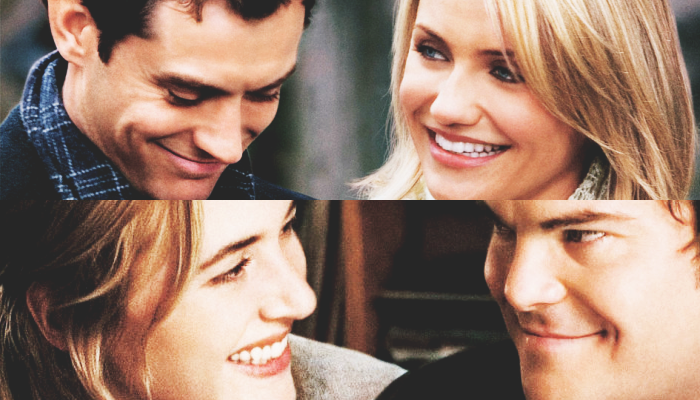 Home is where you want to be during the holidays spending time with family and loved ones. For Amanda (Cameron Diaz) and Iris (Kate Winslet), that's certainly not the case. Desiring to separate themselves from their previous, heartbreaking relationship, Amanda discovers Iris' home on an home exchange website. Temporarily switching residences for the holidays, Amanda settles down in Iris' cottage in London, and Iris jettisons to a Hollywood mansion.

A California-girl to the inth degree, Amanda is a movie trailer editor who "chases" away her selfish boyfriend to cheat by her work ambitions and seemingly inability to cry. In her middle-of-nowhere cottage, attraction knocks in the middle of the night in the handsome, bookish form of Graham (Jude Law). Her manless vacation quickly turns into an exciting and emotional romp without all the drama she's used to in Hollywood. Hopeless romantic Iris takes advantage of her sweet Beverly Hills digs by befriending a legendary Hollywood writer living next door, and a music composer friend of Amanda's. She's not looking for love, and this home-away-home allows gives her time to become the leading lady of her own life.

With the movie split into two different stories linked by one common scenario, The Holiday does sadly feel a little like two different movies; an endearing, consistent tale of a woman discovering to be the leading lady in her own life (Iris), and two awkward people sorta talking themselves into constant sex, and perhaps, love (Amanda). Director and writer Nancy Meyer's delivers a pairing that by films' end is quite adorable overall, but the story division between for her leading lady doesn't split equally.

Though cute and comedic in her own way, Diaz's story doesn't necessarily flow. Her potential relationship with Iris's brother Graham feels more like the entire production is convincing themselves and us that their romp will work rather than letting it breathe naturally. The dialogue itself, her relationship with Graham beings as an awkward, drunk-feuled romp, and as fine-looking individuals as they are, we can never really shake out the image of Law and Diaz not really exuding chemistry.

Having been more known for dramatic roles, Winslet truly shines as Iris; a woman trying to find the gumption to be her own person, develop friendships out of the love spotlight, and tell off the guy who doesn't appreciate her at all. Like her co-stars Jack Black and Eli Wallach, she is funny, endearing, and steals the show. All aspects of her story transition smoothly and doesn't feel forced, and it's so refreshing to see her as a lovable, contemporary character (not that she doesn't earn empathy in more dramatic roles) who lets love flow naturally into life rather than dragging herself into another unwanted relationship.

The heart of the movie, and Iris' story, is what's most attractive about The Holiday. When you change your scenery, you may increase the odds of transforming yourself, widening your circle of friends, and your chance of falling in love with someone you probably would've have never met. Without the miserly scrooges, or tempting fate to see what life would be like without you, Meyers takes two leading ladies and opens their characters up to the possibility of what life can be like elsewhere during the most joyous time of year. It's filled with a lot of Christmas charm, and Winslet's performance is enough to cause merriment for days afterwards. Though entirely not up-to-par with the scripts' cohesiveness, it instills enough entertainment to make me want to revisit it again....next year.
at December 26, 2014 No comments: