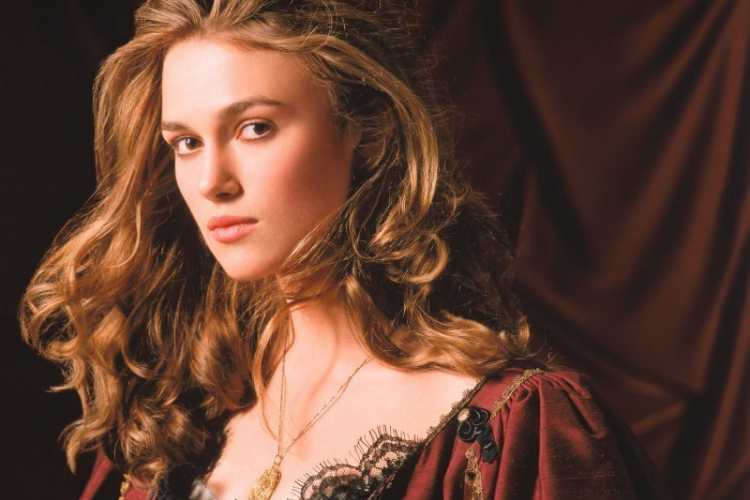 John over at Hitchcock's World began a marathon earlier this summer about Women in Film; a challenge for bloggers to spotlight a female character from any film genre or time period and explain the various qualities that make them a strong character in the masculine entertainment industry.

There were a lot of interesting choices. As a big Harry Potter fan I thought I'd write about J.K. Rowling's range complex witches like Hermione Granger or Professor McGonagall, or George Lucas's Princess Leia. However, Elizabeth Swann in the Pirates of the Caribbean franchise caught my attention and held it more strongly.

Growing up, I remember seeing the first three films in theaters, and of course, was overjoyed by Johnny Depp's Captain Jack Sparrow - as most of the world was at that time. But also Keira Knightley as the governor's daughter turned pirate, wife, and mother was an interesting evolution I didn't notice as the films rolled out.

The adventurous Pirates series are centered around the ridiculous mishaps and broken promises of Captain Jack Sparrow. Most of Elizabeth's goals inevitably has to do with saving herself or Will. Yet, Swann isn't very much like other damsels in distresses within the pirate/action genre.

In the first film, she defies the social morals of the 1700s as a respected governor's daughter. The  adolescent portrait of Swann is often forgotten. With her father sailing across the ocean, she is enraptured by the life of a pirate and scallywags brought aboard. Her father and his commodore try to keep her in the dark about such scandalous behavior. She will eventually grow up, stop having such foolish hobbies, and will be married off as political leverage.

Or that's what the plan was. She is everything a well-brought up girl should be, but underneath she wants more adventure and freedom. When she well into her teens, Swann is captured by Captain Barbossa, but doesn't allow her passage aboard the grim Black Pearl scare her into submissiveness. She tries to manipulate and guarantee her safety. Of course she has to do this to protect herself. This example doesn't cover the many ways she is bad-ass from day one; going for the swords when pirates first break into her house, stabbing Captain Barbossa the second she has a chance, using all of Captain Sparrow's rum to get the attention of the militia for her own rescue. As the films go on, and she becomes more like her counterparts: doing what is necessary to survive, going where the sails take her, and dealing what comes across her path.

Perhaps one of the most memorable moments for Elizabeth is when she wears a corset gown her father had bought her. Atop a cliffside unable to breathe and listening to a heartfelt proposal from her fiance-to-be, Swann falls into the ocean below. Once brought ashore by Sparrow, she is rarely found in the same feminine and confining wardrobe again. As her pirate persona grows stronger, the studios didn't take advantage of this and give her less-to-wear wardrobe. Her costumes let her breathe, move, and look like an actual pirate; not fancied or frilled up. Later, she even fakes passing out so Will can rescue Jack. By doing so she goes against her father and the entire militia's orders. This girl was not meant to be tied down and constricted.

No one said a strong female character can't be in love, but Swann also doesn't deny that she wants to be married either. In the second film, Will fails to show up to their wedding after one of his escapades left her behind. Swann goes on her own search with Sparrow to find him. Along the way, she struggles to keep her moral compass and to fight for honorable men. Her days as a governess taught her that's how life should be. But being surrounded by pirates she becomes less subservient to the all-male crews and grooms herself to survive in this dog-eat-dog world, doing what she can to find Will but also getting caught up in the pirate's life she was supposed to avoid.

In the third film, she is unwilling to be dependent on others but secure her own fate. Swann becomes a leader of her own crew, defends herself in sword fights, and isn't afraid to take calculated risks - if its in the name of love or her own freedom. Swann and Will are a more cohesive couple out on the open seas, but she grows more independent and retaliation is in her blood. When the stakes are down she delivers the "speech of the king"; not Jack, Will, or Captain Barbossa and moves everyone to fight until the end.

In the closing moments of the final film, Elizabeth and Will are married, only he is bound working on the Dutchman's crew. Stranded on an island with their child, she fends for herself. She gets married to a man she loves like she always wanted. The deserted island motif is a bit extreme, but she has long shed civilized society. Even though Elizabeth is often associated alongside Will because of their relationship, it was more difficult to find anything as Elizabeth Turner (his surname) other than Elizabeth Swann.