The Beast Within: A Tale of Beauty's Prince by Serena Valentino 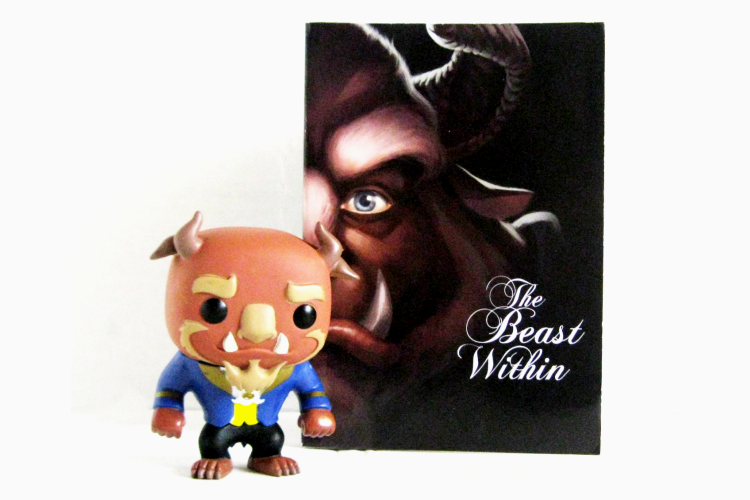 In the right hands, Disney villains can be a fascinating source of storytelling for so-called bad guys. Fans can learn more about antagonists on a deeper level that's often lacking in the animated movies. While I wouldn’t consider the Beast / Prince from Beauty and the Beast a villain per say, an intriguing potential backstory can be explored about his value towards superficiality versus true inner beauty.

The Beast Within changes quite a lot about what we know of Disney’s the Prince. For one, he’s great friends with Gaston. Hunting animals and looking down on others, especially women who don't meet their standards, is primarily what they have in common. When the Prince falls in love with a woman who is beautiful, but nothing more than a farm girl, it’s just about the worst thing that could happen. But not in the way he assumes. After a humiliating breakup, she and her sisters reveal themselves to be Enchantresses. Out for revenge, they place a curse on him by turning him into a Beast. He can only break the spell by falling in love, receiving love in return, and the union must be sealed with a kiss before the last petal of an enchanted rose falls.

Something fans don’t quite get in the original movie, and only teased in the recent remake, is what a genuine cad the Prince must’ve been to be turned into a monster. Author Serena Valentino has a competent grasp on what makes him ugly on the inside and outside by focusing on his limited attitude towards women and his material needs. His blatant selfishness and lack of compassion is quite overbearing and exudes off the page. You manage to dislike him but also recognize his fears as he's physically morphing from a human into a beast. At times, he's not necessarily likable, but from the nature of the story and his fate, gives him room to change his ways.

Valentino's version ultimately becomes is a little too mixed up in plugging in staple scenes from the original movie while tapping into different backstories that seem cool but aren't well-rounded. Her additions to the story like his friendship with Gaston is a creative place to drawn on as to why the Prince might act the egotistical and conceited, but the story backs from fully committing to the idea. Even romantic relationships with a woman who turns out to be a witch, and another socialite whom Beast prematurely uses to outsmart the curse with, offer interesting twists to female characters other than Belle. But then their unique motivations wear off to reveal the writing and construction is very basic. And, the iconic heroine herself Belle is ultimately used as a bookend and doesn't hold any significant bearing or involvement in Beast recognizing how to be a kind, compassionate human.

Sometimes villains can't be redeemed by their corrupted ways, but for a character who has that room for growth, it's disappointing when re-tellings don't capitalize on exploring the full spectrum. Unfortunately, the story and book are just too small, only a quick 200+ pages with fairly short chapters. If the length and size of the book were bigger, or the author worked with a wider scope, the story had potential to be more detailed. How the Prince acts like a monster is just as important as to the Prince recognizing the error of his ways. The book never aims to accomplish both.

Email ThisBlogThis!Share to TwitterShare to FacebookShare to Pinterest
Labels: beauty and the beast, books

More Magic, More Problems: How the Enchantress Almost Shatters Love in new Beauty and the Beast

If you haven’t seen the new movie starring Emma Watson, here is your warning: There’s nothing but HUGE spoilers below! You’ve been warned!

Email ThisBlogThis!Share to TwitterShare to FacebookShare to Pinterest
Labels: beauty and the beast, disney

A remake rarely fills a gap of something that simply wasn’t there before in the original. As Disney re-imagines a string of their own animated classics into live-action flicks, it’s difficult to imagine why they’d want to toy with perfection. Their transformation of the timeless Beauty and the Beast is truly spellbinding, if a little imperfect.

In a tale as old as time, Emma Watson stars as Belle, an independent bookworm who dreams of a bigger life than the one her small, provincial town expects. As a self-absorbed veteran Gaston (Luke Evans) sets out to own her affection, she is compelled to break a powerful spell held over another self-absorbed beast (Dan Stevens), who is actually a prince in disguise. Only one is truly worthy of her kindness to discover more than what meets the eye.

Email ThisBlogThis!Share to TwitterShare to FacebookShare to Pinterest
Labels: 3 stars, beauty and the beast, disney, film 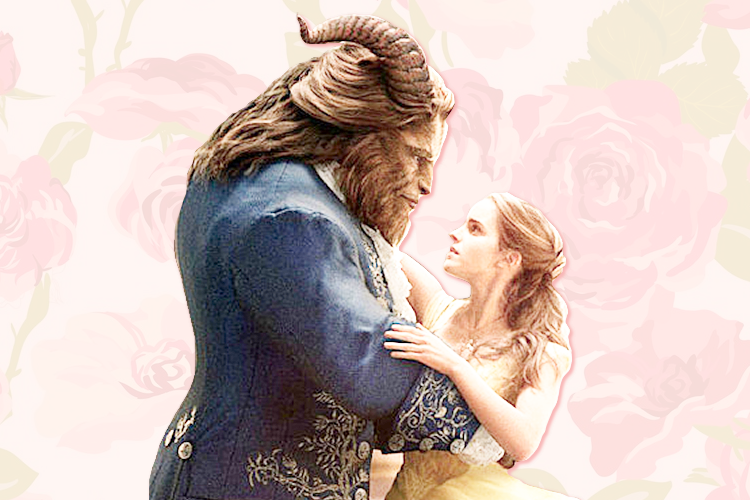 Disney's new live-action remake Beauty and the Beast starring Emma Watson is right around the corner. I can't wait to see what Disney has in store re-imagining one of its most popular animated classics (and my favorite princess).

The new take on the heroine's adventure to break a powerful spell promises to be a grand fairytale and is inspiring artists all over the world. Below is a collection of artwork inspired of the re-imagining with credit given to their creators. Be sure to click on the link below the images to see more amazing work. Are you excited for Beauty and the Beast? Feel free to share below. Hope you enjoy!

Email ThisBlogThis!Share to TwitterShare to FacebookShare to Pinterest
Labels: artwork, beauty and the beast, disney 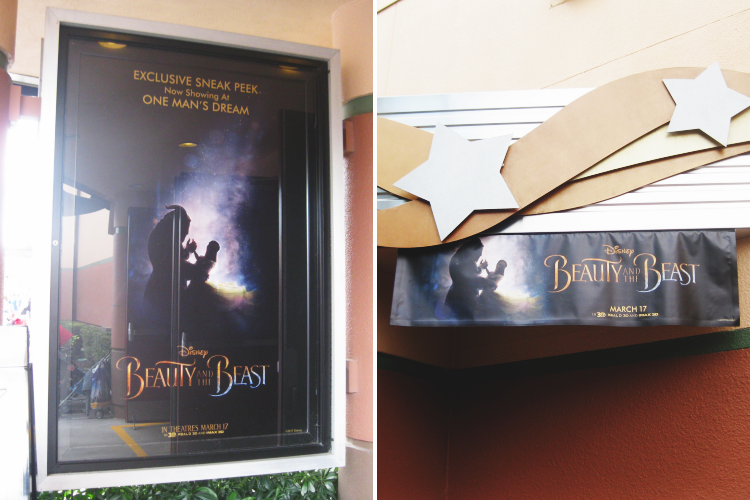 Release of Disney's live-action remake of Beauty and the Beast is right around the corner. And the studio is pulling out all the stops. While the cast is on a world press tour, an eight-minute exclusive sneak-peek with costumes on display are open to park guests at Walt Disney World's Hollywood Studios in Florida and Disneyland in California. At Disney's Hollywood Studios, costumes from the new movie are on display and I was able to catch a sneak peak of the first five minutes! 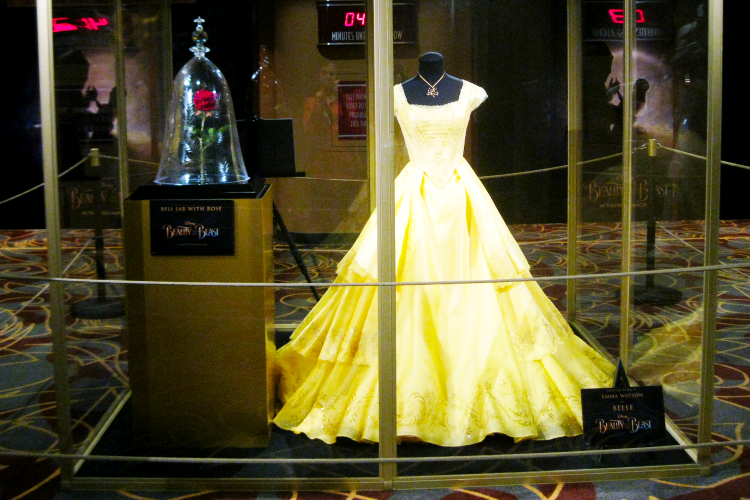 The prop on display at Hollywood Studios is the red rose under its glass dome. And the costume is Belle's golden dress, which she famously wears during her and Beasts' iconic ballroom dance in the 1991 original film.

At Disneyland Resort in California, the costumes on display includes Belle's village blue dress, a map, an enchanted mirror, and a rose under the bell jar. I would've loved to see these in person too!

Email ThisBlogThis!Share to TwitterShare to FacebookShare to Pinterest
Labels: beauty and the beast, geeky lifestyle, lets go to there, travel

Beauty and the Beast (2017) Trailer Reaction 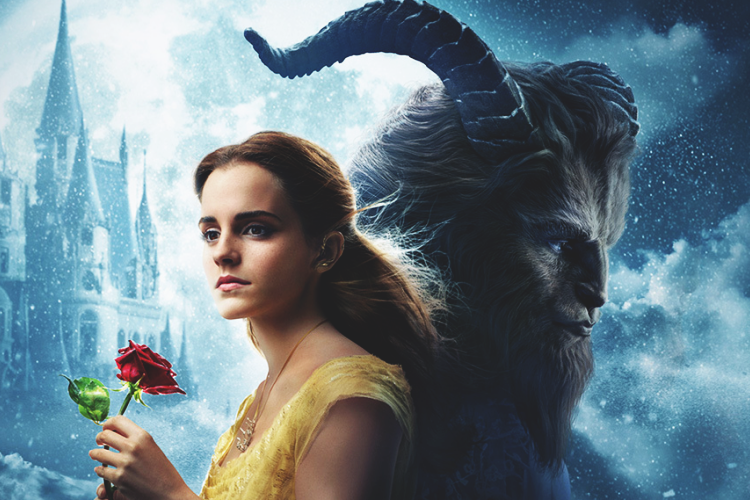 Remakes have started to run their repetitive course, but one studio might have found the secret. Disney's reinventing their classic animated princesses into live-action heroines, and the results have been fairly good so far. Maleficent cast a spell on the box office and Cinderella dazzled audiences. Next on their plate is Beauty and the Beast, and I for one cannot wait for 2017.

I'm probably fairly biased. Belle is my favorite princess from Disney - both the classic 1991 animated movie and ABC's network show Once Upon A Time. She's a bookworm, intelligent, kind-hearted, curious, and friendly. With the new release of the trailer, I'm even more excited to see another version of her tale.