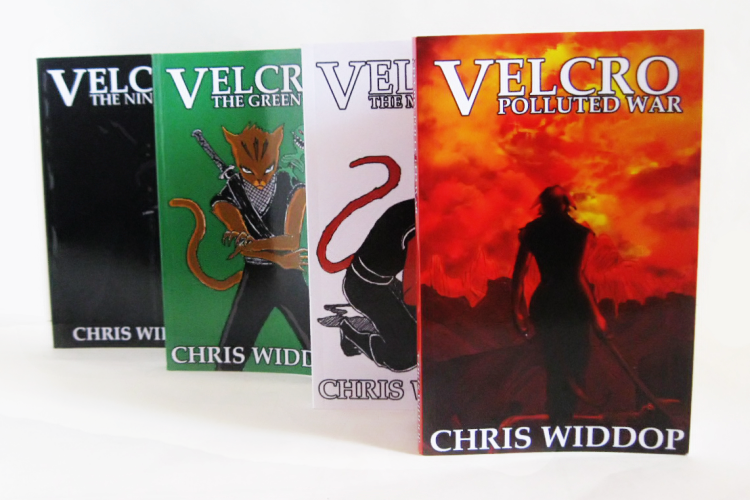 One of the great joys of watching a series evolve is the growth of the story, characters, and worldbuilding. Every addition reveals where the journey is going to venture. When author Chris Widdop announced the fourth installment Polluted War for the Velcro series, I was excited to receive a copy to review.

A masked vigilante feline Velcro begins her adventure in Velcro: The Ninja Kat, righting the wrongs in the Country of Widows when villages across the region are attacked and the activities of a military organization The Devil Corps becomes increasingly suspicious. As the series moves along with The Green Lion and The Masquerade, Velcro begins to understand her connection to the land's magic,  and just how deep the corruption with her enemies runs. Her strength helps win allies to join her cause but also the attention of those from the other side who want to stop her. Now, in Polluted War, the stakes are at their highest as Velcro delves deeper into a war that continues to unfold.

Since the beginning Widdop has created an imaginative world filled with anthropomorphize animals who are a vessel in telling his story. Full of charming and complex worldbuilding, I was wondering what Velcro's magical abilities meant and how it was used across the world; what was the history of magic that made the Devil Corps want to remove it from the world and how those who wield magic might use it to defend themselves. Between Velcro and the villages who are ready to stand up for themselves, The Devil Corps willing to do anything to win, and The Masquerade who want to protect magic, there's a lot of conflict brewing at the forefront and Widdop breaks it down in a unique way in a manageable pace. Slowly but surely, the direction Widdop has taken with Velcro comes together from revealing pieces of the story and letting them fall into place.

The previous books showed that war affects everyone, and that the supporting characters have their own personal battles or reasons for justice which makes them want to fight. While Velcro is still the leader of the pack and drives the story, Polluted War feels much more like an ensemble piece. Her brother Charlie, close-by comrades, and leaders vying for the Devil Dogs are on their own arc of self-discovery and are challenged to choose which side they're on. Behind the use of magic and the villages vying to protect each other is a real sense that every piece adds up to the whole of the battle. It's easy to become invested in Widdop's variety of friends and antagonists because they are not one-sided or weakly written. Outside of his spirited, determined, and empathetic heroine are sidekicks and advesaries with their own motivations and create a genuine atmosphere of sacrifice that the war is producing.

In terms of the writing and world-building, the attention to detail is as strong compared to the previous books. While in my last review of the first three books I nitpicked about the geography, that slight issue still arises here and there but not as much as it used to. His attention to his characters isn't missing in his worldbuilding, but in terms how the characters travel from place to place rather frequently, it's a little confounding to figure just the wide scope of where going or leaving. But again, that's nitpicking. Widdop has a great sense of who his characters are and the conflicts that they are imbued in, which reflects in his engaging style as the story goes deeper with familiar and new characters.

So far, the Velcro series continues to be charming and action-packed. Polluted War maintains that same sense of adventure as it did in the beginning, just fuller and rounder as the books continue to grow. This series is a wonderful start for fans of action mixed with fantasy who enjoy an engaging quick read filled with complex animal characters. I'm excited to see where Velcro and the revolution heads to next!