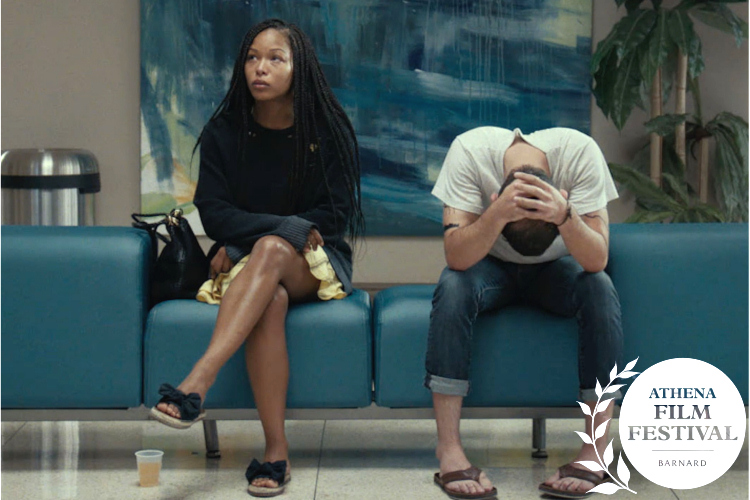 Two different nights in Austin, Texas set the stage for Test Pattern – the first charming meet-cute between Renesha (Brittany S. Hall) and Evan (Will Brill) ends with the couple’s courtship blossoming into a loving lived-in relationship; the second similar night ends with Renesha drugged and sexually assaulted by a stranger during a girl’s night out at a bar. And the couple dealing with the health care system as they try to secure a rape kit.
The fragmented memories of sexual assault. The lengths it takes to get support. The self-recrimination of dealing with the what-ifs that event played out differently. Writer-director Shatara Michelle Ford has all she needs to set the scene for using reality as its own horror show. Yet instead of going for the gusto and hurling A Film With A Message™ at their viewers, they trusts themselves to create a thought-provoking film that’s both equal parts a cinematic experience and fitting portrait of race, gender, and power.

Much of what Ford delves into revolves and comes alive through the performances. Renesha’s conflicting emotions play out ‘quietly’, but never once do they feel overlooked or shoved to the side. Hall’s body language and gestures infuse exactly with what you know Renesha’s internal dialogue must be – anger, resentment, confusion - until it’s all too much and her emotions rightfully spill out of her. Meanwhile, Brill’s Evans manages to break out of the silly boyfriend mode with ease and into superb displays of lashing out to take control of the situation and the privilege of his whiteness to do so. Their characters strive to not only explore the aftermath of such a disorienting experience for the survivor, but also deconstruct the seemingly perfect partnership between Renesha and Evans, and exploring the steep decline when trauma comes into play.

It’s difficult to not talk about Test Pattern without also mentioning one of the more divisive movies out right now that handles a similar issue. The exploitative-thriller Promising Young Woman - where a friend of a rape victim enacts revenge against her culprits – has garnered a lot of attention as a feminist flick, a revenge, a comedy, a statement on toxic masculinity, survivor’s guilt and grief, to name a few. But for me, the film personally lacked that the writing and direction nuance to hold the weight of its aspirations clearly (my spoiler-filled review is here). There’s a stark void of hopefulness and recognition of deeper underlying issues survivors face as the story infuses moments that the victim of a rape (and subsequent suicide) more of a nameless forgotten memory than a real person, and her avenger a willful victim of a graphic death in order to seek justice.

Test Pattern, in contrast, never loses sight of the varying stages of shock, disbelief, shame, grief, and resilience for survivors even when the production elements become more heightened - Renesha’s vision becomes out of focus while she’s drugged and trying to remember what happened to her in flashbacks or Tchaikovsky’s Waltz of the Flower blaring as the couple bursts into another hospital for aid. Where Promising Young Woman loses touch with reality by fixating on having something profound to say, Test Pattern facilitates the same inciting incident but with thoughtful realism and a cross-blend of romance and psychological horror.

Of the only hiccups I can think of, it would be its lean narrative running at 82 minutes. While the film encompasses the before, during, and after of Renesha’s experience, the film moves at a pretty brisk pace between all three. This isn’t to say the events are too rushed, but it did make me wonder how little or more the production could’ve delved into if given that extra edge. Point-blank, a lot of what works with Test Pattern is Ford’s ability to hold a mirror up to a fractured healthcare system for women, the angry and over-emotional stereotypes strewn against Black women, the patriarchy’s influence, and systemic racism – they are telling you exactly what they mean without getting lost in overt symbolism or emotional manipulation. In every non-verbal gesture, camera placement, or a line of dialogue, Ford is laying out the dots to connect that are both obvious and will take time to settle in. There is power in subtly, and Test Pattern passes with flying colors.

Screening Test Pattern was a part of my coverage of this year’s Athena Film Festival. Check out more of my reviews here.
at March 23, 2021