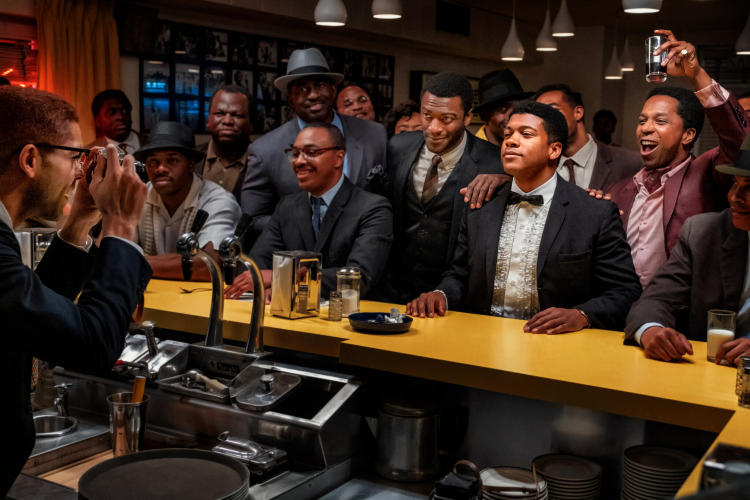 There are moments where we'd do anything to know what the walls would say if they could talk. Sometimes films gives us the opportunity to piece together history as best as possible or simply imagine what might've been. For Regina King making her directorial film debut, she sets her sights on capturing a seemingly everyday get-together that just so happens to feature four of the 20th Century's biggest icons.

Based on a fictional account of a real event,  boxer Cassius Clay (Eli Goree), football player Jim Brown (Aldis Hodge), singer Sam Cooke (Leslie Odom Jr), and activist Malcolm X (Kingsley Ben-Adir) join together for an evening in Miami, Florida. The former three assume their reunion is to celebrate Clay winning his first world heavyweight championship bout, but Malcolm X has a more laid-back idea in mind - ruminate about their lives including faith, racism, Black excellence, and their futures.
Similar to a musical, dialogue-driven films can be hard to suspend our disbelief, especially when it's based on a play. One location with a limited amount of characters can feel heavy-handed. It might not be the biggest source as a box office draw or draw the most amount of movie-goers, but it’s a good start for a Hollywood veteran to make her mark behind the camera.
As an ensemble, each actor shines individually and together as a group. Though One Night In Miami centers around four historical figures, a good portion of the story belongs to Malcolm X and Sam Cooke. Abdir maintains a good sense of Malcolm X with the familiar "prophet-mode" reputation he's popularly recognized for and the emotional toll of seeking Black excellence for all - you could say the movie is told mainly through how he sees his fate and struggles with the finality of his friends' influence enduring long after they're gone. Odom Jr. completely breaks free of his performance of Hamilton's Aaron Burr, letting us see Cooke as the powerful yet conflicted icon he was and still is. Their fellow castmates - Eli Goree and Aldis Hodge are just as influential but are used more subtly. Clay could've been a caricature, but Goree makes him well-rounded as well as boisterous and spirited; Hodge gives a soft yet stern performance to Brown - he isn't given much to do, but when he's on-screen, it's hard to turn your attention to anything else. This isn’t to say that Goree and Hodge aren’t as influential, but they’re more like tag team partners used to be the voice of reason as the tension builds between the main duo.
If we know who these men are by hearing or reading their name, the film doesn’t buy into making them larger-than-life or using their names for clout. Over the film’s running time, screenwriter Kemp Powers (who also wrote the play) captures what could’ve occurred between the four friends since no record of the conversation or what happened exists. The Civil Rights movement serving as the film's setting naturally invites a reflection of our current social and racial climate, but doesn't make the characters or what they express too over-the-top or heavy-handed. Powers explores a wide breadth of experiences and choices that let us see their vulnerabilities as real human beings and their influence as future icons, and does so with an equal amount of banter and tension that makes their evening together intriguing and entertaining.
One Night In Miami relies mostly on script and actors to hold your interest, but this doesn’t count King out as a solid director. The film might not helm a huge budget or showcase all the style in the world for the story, but she and her team (cinematography, costume design, and production design in particular) know exactly what they want – where the camera should be, the seamless blocking, etc. Even though it’s based on a play, it doesn’t feel like King forcefully wants you to feel like you’re at the theatre. Instead she lets the characters become three-dimensional on their own and works with them or around them, and leaves you with an impression of how the evening would unfold realistically and on stage. The film isn’t the darkest drama, riotous comedy, or meatiest biopic, but it’s an engaging exhibition of her efforts in front of, and now behind the camera, that's been worth the wait.
Rating: ★★☆
Have you seen One Night In Miami? What did you think?
One Night In Miami is now on Amazon Prime.
at January 17, 2021