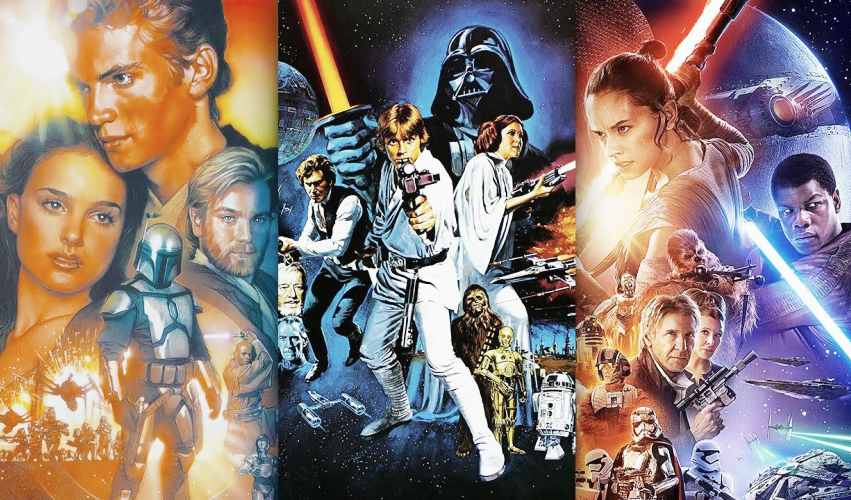 For forty years, Star Wars reigned as one of the best phenomenons in the world. It's captivated generations of fans to the force, stand up against the Empire, and trail the Skywalker legacy. With director and creator George Lucas's initial saga having finally completed in 2019, and the rest of the universe on-hold for both theatrical releases and Disney+, I thought it's about time to rank the film franchise and spin-offs so far. How would you rank the series? Feel free to let me know in the comments.

The Rise of Skywalker

The trail of breadcrumbs from The Force Awakens was never completed, and The Last Jedi's set up was retconned. Rise of Skywalker is fanservice on top of a non-existent plot on top of pleasing fans who hated The Last Jedi, and ironically, failing to satisfy almost everyone. The character development is a chaotic mess from the unfulfilled insertion of Palpatine to Kylo's entire ancestry abandoning him to the complete erasure of supporting characters' arcs. The plot fast forwards finding one random object to another without contextualizing what they meant previously or what they're going to mean by the movie's end. And in all, the heroine is entrapped into a half-baked destiny as a Sith Lord's granddaughter, the leader of a Resistance who didn't look to her for leadership (outside of Poe and Finn), and the unearned inheritor of the Skywalker's legacy. Abrams's direction doesn't even offer dynamic cinematography or production to make up for its flaws.

After a ten year absence following Revenge of the Sith, Star Wars came back with a bang - sort of. Having used Star Trek as his audition tape to helm Star Wars, Abrams relies too much on the spunkiness of A New Hope to create his own story - a new Republic and the all-seeing-all-knowing villain exists somewhere in the ether with a Resistance caught in the middle. So much of the characters act as if they've seen the Star Wars movies instead of existing in the Star Wars universe. Every compelling nugget of the new characters' origins is a question and answer for another time that never arrives. As a first film in a trilogy, it truly shows potential, especially with the cast and Harrison Ford gives one of his best performances ever. But by sabotaging the plot, the force should have stayed asleep because this is just an average blockbuster set in space.

There's nothing inherently 'wrong' except that Solo's spin-off is boring. He plans to steal coaxium to get himself out of a debt with a ruthless crime lord....but the plot is a convoluted maze of Solo catching up with characters we already know he has a relationship with and tries to establish new characters who aren't interesting. The cast is a wonderful ensemble, particularly Alden Ehrenreich taking up the mantle from Harrison Ford...and Ron Howard's direction elevates the Star Wars franchise with a refreshing Western-Noir....But nothing outside of the cast excites me. Except those capes.

Return of the Jedi

Sorry to say, but I always forget Return of the Jedi is the final film of the original trilogy. It ends what A New Hope and The Empire Strikes Back starts, but also feels like a rushed copycat of both. Jabba the Hut is not threatening or interesting at all, Leia's oversexualized for no reason, the Ewoks are annoying, and even Vader's redemption feels shoed-in by the end. The only thing that pays off is the Rebel Alliance's victory over the Empire and Luke refusing to turn to the dark side, but most key scenes are marred by those furry bastards running around Endor. It's more or less the same as its predecessors and fails to capture the same spark.

Rogue One: A Star Wars Story

Direction by Gareth Edwards and cinematography by Greig Fraser makes this one of the strongest aesthetic entries in the saga. Almost every frame adds a new dimension that the whole series didn't have before. While the technical elements intrigue me enough for the first hour-plus, the final mission is what packs an emotional punch. Everyone is willing to sacrifice themselves and stand up against tyranny for a future they aren't even sure will succeed. That said, because of the plot, the characters are inherently static and makes it hard to connect with. Jyn Erso's arc, in particular, skips all over the place with a script that doesn't build her up from childhood, to her guardian Gerrera and the slippery slope that made her an indispensable rogue. Felicity Jones's stoic energy just doesn't make her captivating as much as she should be, so thankfully the supporting cast Diego Luna, Donnie Yen, Jiang Wen, Ben Mendohlson, and Riz Ahmed make up for it. It's a sturdy spin-off that does what it's supposed to: fill in the gaps as best as possible between two more widely regarded films.

For the most part, The Phantom Menace has Lucas's imprint all over it - his imagination, mirroring Anakin's story to Luke's, and setting up the Jedi vs the Sith further. Unfortunately, let's face it: Lucas is not the best screenwriter, especially when it comes to dialogue. The film mostly chugs along with wooden direction and a cast doing the best with what they have. It has a decent balance of action and story, and Lucas doesn't dumb down his political undertones of Palpatine/Dooku/etc. rise to power and creating the Clone Wars. The film isn't perfect, but it's more of a victim of fans' hatred making it seem worse than it is. Even though the film clearly suffers from weak creative choices, I can still tolerate its diamonds-in-the-rough quality.

Attack of the Clones

Unlike any of the other Star Wars movies, this one builds its setting from background aliens in a diner to Grievous's drone army to give us a stronger sense of the universe beyond basic impressions we have of the Jedi and Sith. More than that, Attack of The Clones is given the grace period of planting Anakin's struggle to balance his emotions and develop a brotherly bond with Obi-Wan. Even though Anakin and Padme are destined to be together because Lucas makes it so, she's a formidable heroine that also takes a step up from her origins in Phantom Menace. The script offers all the characters distinct personalities, implements a dry sense of humor, and manages to squeeze in action to keep the plot moving along. Lucas manages to find his footing here after everyone hated on The Phantom Menace, which is pretty impressive.

On the surface, TLJ does not feel like a Star Wars movie. There's a checklist, I guess, of boxes I expect the sequel will hit - fansservice, address every theory, and leave questions to be answered for another time. And yet by the end, everything that I doubted ties together - the grey area of good versus evil, war profiteering, a diverse group of heroes trying to do better with the boomer generation's mistakes. I always end up moved by the full circle of the lessons to be learned by failure, the pitfalls of hubris/idol worship, and the power of legacy and myth. When all of the layers are peeled back, the film is a Star Wars movie. It starts to establish the idea that the destiny Rey and Kylo think they are fit for doesn't match up to who they naturally are. Like Rogue One, it doesn't have the generic blockbuster look of the prequels, the humble aesthetic of the originals, or the copy-and-paste-structure of Abrams' sequels. Despite Hammil's insistence against Luke's arc, this is one of his best performances and has so much more to offer than Rise of Skywalker. I can't say I'm ever fully satisfied with parts of the film, but I always end up feeling generally satisfied by the whole.

The Empire Strikes Back

Remember when a franchise could transition between writers and directors, and it didn't go down in flames? Yeah, me neither. Written by Leigh Brackett and Lawrence Kasdan, and directed by Irvin Kershner, the follow up to Lucas's A New Hope goes deeper into the textbook definition of Joseph Campbell's The Hero's Journey. As the whole plot works towards the series' biggest twist, it doesn't sacrifice Luke's own arc when he's split up with Han and Leia (which by the way, if this was released today, everyone would be pissed that most of their plot leaves them waiting inside of a space slug). Quite the contrary, everything from the action to the drama and humor works like a well-oiled droid factory. Though this is less light-hearted than A New Hope, it's the perfect sequel.

Revenge of the Sith

Every actor who plays an antagonist or an anti-hero says 'nobody thinks of themselves as the villain.' Taking it back from the original trilogy where Lucas showed us that an antagonist can try to be redeemed, here he shows us that 'good' is a point of view depending on which side you are on. Despite our inherent faith in the Jedi order, their unflinching lack of trust in Anakin is precisely what leads him to temptation of greed and power by Palpatine. With special effects that still hold up and a healthy dose of action to balance out the political-esque plots the Empire's early days, Revenge of the Sith is what happens when you have three movies to develop its characters,. While Revenge of the Sith has inconsistencies from A New Hope, there's nothing here that fatally ruins the franchise. (No, not even Hayden's performance.)

Sometimes you hear about what influences a director, but the final product is a mosh pit of loose dots that you can't connect. When you hear Lucas was inspired by westerns, Flash Gordon, pulp comics, Joseph Campbell, and real world events at the time, you feel it in every angle of the film from the characters to the set pieces. Its script hooks you with the trio - a farmboy, a rogue princess, and a scoundrel against a galactic empire, and ingeniously crafts these misfits into a space operatic world. I can always watch this and imagine what it was like to be in the theater in 1977, experiencing this for the first time. Despite all of their best efforts, most action movies wish they were A New Hope. They don't even get a medal for trying.
at May 04, 2020