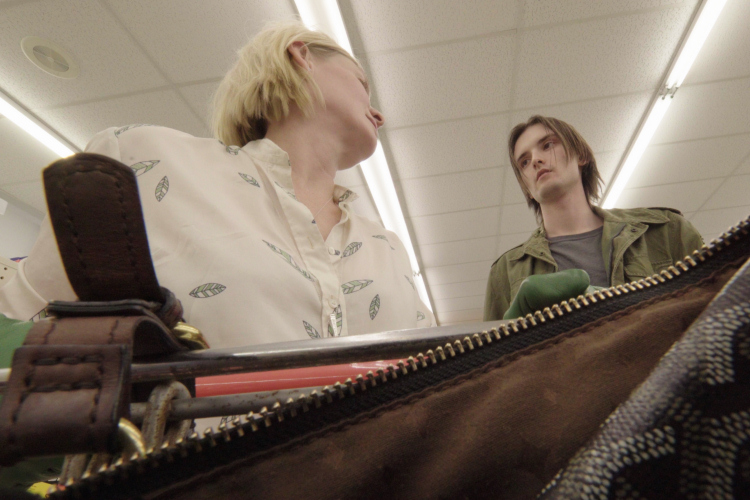 One of the scariest crossroads a parent can imagine is their children heading towards a destructive path where they want to cause themselves or others harm. What’s worse is when their child exhibits violent tendencies, but they aren't able to seek proper help and are left to their own devices. Tapping into the dysfunctional relationship between a mother and son, as well as the violence springing from young adults today, M.O.M. (Mothers of Monsters) tackles mother’s intuition and societal paranoia.

Concerned mother Abbey (Melinda Page Hamilton) has recognized a pattern of mental health issues with her son Jacob (Bailey Edwards) since he was a young boy. Having grown up as a teenager with an obsession for video games and Nazi paraphernalia, Abbey now questions whether her son is planning an attack on his school. Left to take matters into her own hands, Abbey rigs their house with an elaborate surveillance system in the hope of helping other mothers recognize the warning signs.


Making her directorial debut (and with her second work as a writer), Tucia Lyman’s family-driven horror is a culpable mix of paranoia and reasoning. Using found footage of Abbey’s interactions with her son, and her attempts to understand their dysfunctional relationship, Lyman’s positions the use of camera in deliberate ways that aren’t cheap or used for the shock factor. As a good portion of the horror hinges on Abbey carefully recording her suspicions, and their relationship spiraling out of control, the film comes across as a natural insertion into the family’s complicated relationship.

As a primarily two-person led film, Hamilton and Edwards’ antagonism and nurturing bond towards each other’s’ characters is palpable. The film makes cases for what motivates them both and where their mindset is – Abbey’s concern for her son is accurate, but also borders on irrational, as the constant surveillance of his severe mood-swings pushes her son further and further away. Hamilton captures the worried mother trapped between instigating and trying to suppress her son's terrifying impulses. Jacob, for the most part, is stitched together with footage of what his mother or friends capture of him – either genuinely violent outbursts or “typical” teen angst with little moments in-between to show a softer side. Edwards captures the essence of a disaffected teen baiting others and taking things too far, while also giving us enough to wonder if his behavior is a result of his own mental health issues or merely a response to the dysfunctional connection with his mother.

For the most part, the tension between the two characters is palpable and claustrophobic. However, at times, the premise is also a little too diluted. The found footage works best when it is building towards moments of genuine shock and suspense, but the script too often relies on solely focusing on Abbey’s constant surveillance and questioning of his behavior – and little else. By drawing inspiration of widespread school shootings in the U.S. as one of the supporting reasons of Abbey's concerns, the film doesn’t delve beyond using some traits of previous shooters. A deeper layer of Abbey's history and Jacob's environment outside of the home would've added more weight to the character development and suspense.

M.O.M. (Mothers of Monsters) strikes a balance between the two main avenues of the story between mother and son – are parents’ concern, and the extreme lengths they will go to protect them, exactly what pushes them over the edge. The film's compelling leads draw you into an extremist relationship that makes you question who is the monster. Tucia Lyman’s direction and script leaves a haunting impression and question for us to answer.

Indie Rights opens M.O.M. (Mothers Of Monsters) in Los Angeles for a week-long run at the Arena Cinelounge on Friday the 13th of March before the film premieres on Cable and Digital VOD. You can check the film’s website and Facebook page for more details. Please Note: I was provided with a screener in order to watch this film.
at March 13, 2020