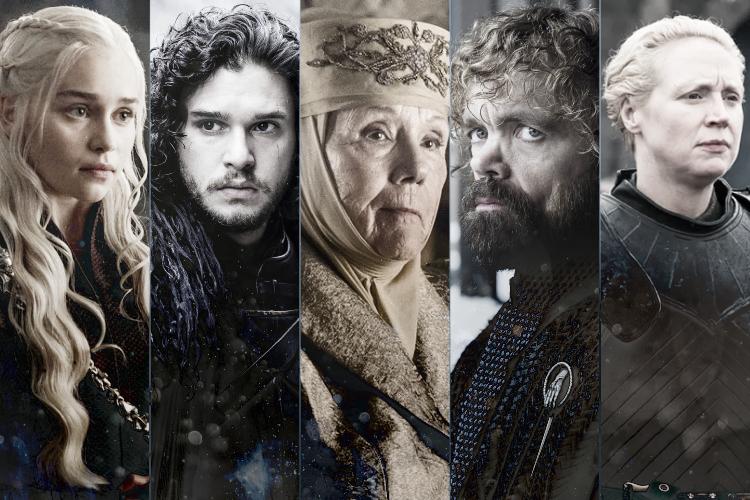 So many characters on Game of Thrones, so little time to rank all of them. While watching the series for the first time, I wasn't quite sure if I was going to be able to keep track of everyone. For a show of this size with at least a hundred characters, coming up with eleven (with honorable mentions) was difficult.  Throughout its eight seasons, certain heroes and even villains always caught my attention and made me root for them.

Like most adaptations, the storylines for a show or movie is immeasurably changed from the books. That said, I haven’t read George R. R. Martin’s series yet, so my choices are entirely based on the television show. The challenge of picking my faves and ranking them in some kind of specific order was hard, but here they are. Who do you love or love-to-hate? How would you rank your own list if you could? Let me know in the comments below!

This post mentions plot and character development from season 1 through seven, and may be considered spoilers. Read at your own risk!

Early on in the show, Varys is totally transparent about wanting the throne to be ruled by the best person and council him / her. But he's also secretive about how he works. Serving for The Master of Whisperers, he wants someone good and just to rule the Seven Kingdoms. Throughout the show, he moves through locations and storylines extracting info out of characters. Though he did set up Daenerys to be sold to Khal Drogo, he's not technically a villain. Talking his way around conflict and keeping his best interests at bay, nobody does a double-take about how easy he gains their confidence and could use it to his advantage. He's one of the stealthiest characters of the series. Not only is his friendship with Tyrion consistently entertaining, but after all the emasculating and misogynist insults hurled around, a eunuch striving to rise above his horrible past and sub-par-dialogue is refreshing.

In contrast to all of the old guys sitting around tables talking about war and raping young girls, Olenna's 1000% done with everyone around her. Nothing truly fazes her - not associates and enemies dying or being killed or the cruelty people exert with their power. And, she completely owns killing Joffrey. Her experience reminds me of Littlefinger's advice to Sansa: Fight every battle everywhere, always, in your mind. Everyone is your enemy, everyone is your friend. Every possible series of events is happening all at once. Live that way and nothing will surprise you. Everything that happens will be something that you’ve seen before.. If I can have one percent of her sass and inability to put up with bull, I’d be extraordinarily happy.

Like most women in the Seven Kingdoms, they’re arranged to marry princes, produce heirs, and help them become kings. Margaery knew she was going to be betrothed to another house and recognized how to play the game. She was deceptively charismatic to gain others trust while extending empathy with the local townsfolk who are treated barbarically on the streets. She built an image as a goodwill ambassador of sorts, but it was hard to know what was genuine about her decisions and behavior. Natalie Dormer was wonderful using kindness as a weapon and causing doubt as to what her character's intentions were. Not to mention Margaery was one of the few, if only, character to make Cersei speechless. She was a true match against Lena, and it was disappointing to not see them go toe-to-toe more.

Serving at Daenerys’s side as her guardian and adviser, Jorah easily wins everyone over. One because Iain Glen is so damn attractive, but also because of his loyalty to his grace in a world where everyone turns on each other for self-preservation. Glen drums up so much support with his subtle performance, we almost entirely forgive his act of treason for spying on Daenerys. After being exiled but still trying to earn her trust, he somewhat turns into a stage-five clinger by season six. But his crush unbreakable loyalty still makes him incredibly sympathetic despite and in spite of his and Dany's inability to let each other go.

Some characters are made to achieve power while others only dream about it. When that kind of ambition falls into the wrong hands and sparks vengeance, you get Theon Greyjoy who cracks under the pressure. After attempting to capture Winterfell and slaughtering its people, he’s captured by Ramsay Bolton and tortured within an inch of his life. Any time Alfie Allen appeared, his character’s trauma was palpable as Theon was brutalized to become Ramsay’s puppet. He’s severely flawed and committed some barbarous acts, but I found it hard to consider him a monster. (Also lots of love goes out to his sister Yara too. And time will tell in season eight if he's truly acting out Cersei's plans.)

For the first season or two, Snow was an elusive character. He's a soldier and The Bastard, but his arc felt incredibly limited. Snow started out on the Night’s Watch just taking orders, but when he was captured by Ygritte and she busted his chops 24/7, my perspective changed. To be honest, I'm not sure my non-existent curiosity in him would've grown if it wasn't for Ygritte's tenacity and their romance. He became more familiar and likable as he fought in more battles, especially against the Wildings and at Hardhome. He has a good heart and his moral compass is in the right place, but after barely escaping a million frontlines, it's funny how incredibly short-sighted he can be too. Ygritte not only did a marvelous job setting up layers for the writers to add more to Snow, but she also offered a spirited personality that was missing among the other female characters.

What can anyone say about Samwell? He’s such a precious snowflake, and honestly, one of the most relatable characters. If I’m to think about my real survival chances if I was born in Westeros, chances are I’d be dead or Sam. He’s thrown into the Night’s Watch by his disapproving father and is terrified to fight until he can rescue Gilly and her baby. He gains a certain amount of courage in battle, just enough to prove he’s capable of doing more than he thought he was before leaving to take care of the woman and kid he loves, and doing what's in their own best interests. He's loyal, and like Neville Longbottom from Harry Potter, wants to help his friends and acquaintances when they need it. Sam’s heart is just so soft and he deserves to be protected at all costs.

A woman of honor and courage living the life of a knight is rarely a character we come across in any series, even a medievalesque-fantasy world like Game of Thrones. How can you not love Brienne - she is faithful, kind, vulnerable, and determined. Brienne wants to serve any worthy house that needs her, but she also speaks her mind when she feels other characters' decisions are heading in the wrong direction. While her on-and-off-potential-friendship-romance with Jaime was off-putting and intriguing, she didn't get suckered into a romantic subplot that veered her own story off the map. By the old gods and new, we don't deserve Gwendoline Christie.

For such a massive ensemble, there are a few characters that I consciously looked forward to seeing when they’re not on-screen. And one of them was definitely Tyrion. He was always treated as the less-than-Lannister for being a dwarf and "causing" his mother to die in childbirth, but his gift of gab and sense of humor helps him withstand his family's dysfunctional relationship. And then when he's ultimately wronged by his father and sister, he starts to seek justice but doesn't cross the lines between hero and villain. As Tyrion's relationships and alliances evolve, Peter Dinklage’s chemistry worked wonders with everyone he was paired with from the House of Lannister and Targaryen to everyone in-between. His charm and charisma made it was easy to love him and remain the show’s anchor when other storylines moved excruciatingly slow or confusing.

I’d always heard about the Mother of Dragons and had a simple idea of what her “moniker” would be. But nothing quite compared to seeing her arc evolve. After being sold to Khal Drogo, she positioned herself into a place of power by becoming a leader of dragons and acquiring soldiers by freeing them and fellow slaves from their captors. In her own empathetic way, Daenerys wanted to liberate slaves, but with that came consequences of dealing with the power structure of her own society. And then when her people were attacked and she was betrayed, Daenerys replaced her benevolence with arrogance. She stopped listening to her advisers and extending her good heart to start ruling with a ruthless intuition to conquer. A lot of fans stopped loving her, but her idealism and vengeance is a transformation I'll bend the knee. And I'm interested to see what her fate will be in season eight - if she will turn into her father The Mad King.

Is Cersei a product of her environment or was she just born evil? I think it's both. Early on in her childhood, Cersei recognized the power dynamics between girls and boys in this world. The former are to be sold like horses to breed while the latter are soldiers and kings designed to rule. Holding grudges against her baby brother Tyrion for their mother dying in childbirth and how her dad sold her off, Cersei's possessiveness over her children and power is her downfall and breakthrough.

Even though she gave the High Sparrow more control and it blew up in her face (pun), the walk of atonement made me root for her even more -  which is horrible to say considering the way she brutalized everyone else around her. She has no remorse for her actions as she claims the throne, but even more than that, she regards other characters as inferior not being a couple of steps ahead like she is. Cersei's been taking her notes her entire life about what she would do when she was in power and has no reservations acting on those lessons she learned and thensome. Loving a villain doesn't mean you love everything they stand for, but damn, it's great to find a enigmatic female villain to love, especially when Lena plays so many different levels of jealousy and vengeance.
at April 13, 2019