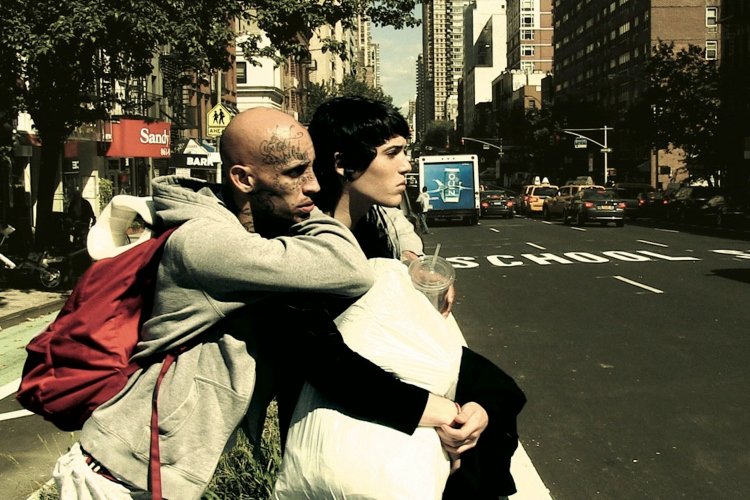 
If there is one takeaway that can be made from Ekaj, it’s the highly personal and gritty realism Gonzalez uses to shine a light on an underrepresented part of society. Focusing on the LGBTQ community, the story follows Ekaj’s obstacles through the worst and optimistic moments as he grapples with his own identity and the real world. Hardly ever leaving his side, the film explores a few days in his life as he falls into toxic relationships and fights a battle with addiction while holding onto finding true love and owning his true sense of self free from fear and self-doubt. Delving into a spiral of abuse, both self-inflicted and enforced by outsiders, Gonzalez’s debut exhibits the personalization of a documentary as much as it does the dramatic tension of an independent film.

Similar to most dramas that rely on substance more than style, the film weighs heavily on the shoulders of its cast. The camera loves the lead unknown actors Jake Mestre and Badd Idea as soon as they enter the scene, allowing them to craft natural and charismatic performances. While there are few minor other characters – Ekaj’s abusive on-and-off again boyfriend Johnny (Scooter LaForge) and flashbacks of Ekaj’s ignorant father (Vinny Cruz)– their presence serves a purpose in chugging Ekaj’s emotional journey of self-doubt along. Because the majority of the plot trails Ekaj and Meccas’ obstacles together and separately, it truly needed performers who could carry addiction, prostitution, abuse, and HIV/AIDS, and the leads manage to accomplish this with seeming ease.

Underneath the harsh realities that Gonzalez's characters grapple with, there is a true sense of humanity for Ekaj and Mecca. As Ekaj navigates "shark-infested" streets of NYC, there should be every reason for him to not trust Mecca or want to forge a relationship with him, and vice versa. Yet both develop a true sense of belonging for each other, one that is established through kindness and endures the worst of what anyone can face. As dogged as the film is in handling its drama, the loving nature between the leads gives the film a sense of hope that no matter what anyone is going through they are never alone.

Not shying away from the tragedy and hope of her characters, Gonzalez weaves an admirable debut as a first time writer and director. However, elements of the freestyle production intermittently struggled to translate. Mainly, the transitions between scenes never quite found its footing as dialogue between characters quickly ends while music briefly swells in and out. The most powerful scenes is Gonzalez injecting her experience from fashion photography to encapsulate pivotal moments with tension and heart. The briefest moments of Ekaj and Mecca opening up to each other with humor and honesty were as memorable and impactful as when they could sit comfortably in silence with each other sharing a smoke or trying to make it on the streets. Even though most of the film contains tight-editing and follows Gonzalez's instincts to capture the rawest emotional exchanges, some of the up-close cinematography remained shaky and jarring.

Capturing the realism of a documentary as well as the dramatic flair of an independent film, Ekaj is a vital and enduring entry into queer cinema. As much as Ekaj’s journey is a whirlwind of rigid experiences, his relationship with Mecca opens him up to discovering his truest potential. The heart of the film is not only the story and characters but Gonzalez drawing on inspiration from her own experiences with the LGBTQ community and family and friends who have died from AIDS. Her work is not just for a gay audience, but a human one. With a film garnering 29 awards during its long 65-festivals run, her in-depth take is a necessary exploration for so many who simply want to be who they are and are able to find love with someone who is willing to join them.

Rating: ★★☆
Have you seen Ekaj? What did you think?

Please Note: I was provided with a screener of this movie in exchange for an honest review. Ekaj is currently available to watch on Amazon Prime.
at April 20, 2019