5 Ways to Recover When Your Favorite Show Ruins Everything 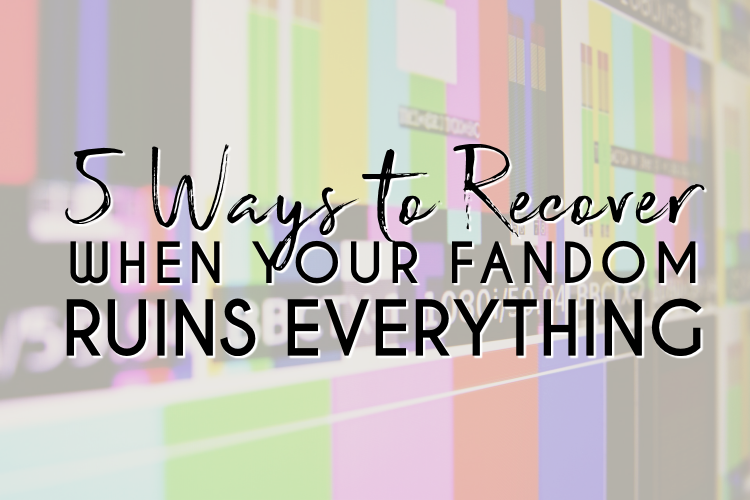 Sometimes we love a television show or fandom too much to let it go. Maybe the writing or direction declines but we hold on to see if it gets better...or out of respect for the actors we love, we want to see how their characters' arcs turn out. And, suddenly, or tortuously, the end of a series comes along and we're feel confused about where it all went wrong; tricked because the writers took stories in a completely different direction than what they had set up; robbed of having a satisfactory ending to what was a truly brilliant beginning. I've been there before over and over again, where I try to give a show every benefit of the doubt - Hello, Once Upon A Time, The Walking Dead, Mad Men, Castle, The X-Files - until I just inevitably accept that my favorite show ruined everything.

When a fandom takes a turn for the worst from character arcs to possible plots, it's quite the grieving process when it all goes downhill. Yes, I said grieving process because there's a big loss when a show fails to show up for you the way you supported it for over five, or even ten years. Fortunately, there's a small bit of light at the end of the tunnel, a little survival guide you can use to recover when your favorite fandom is truly a life ruiner. Well, here some things that I like to do and hope they help you out and enjoy! Has a show ever ruined everything for you and you still feel the effects years later? Let me know in the comments!

Tuning into a new show for the first few seasons is a gamble. As the story unfolds, it's hard not to let our expectations get the better of us or carry over problems we've had from other fandoms. If a show is on the verge of being cancelled, there's an even bigger risk that some of your favorite characters aren't going to get an ending, let alone a happy one. Sometimes what we really need is a show that is complete. It already has a beginning, a middle, and end. You're not at the whim of hype and can just binge-watch as you please on Netflix and Hulu. And better yet, if you're not feeling the show but want to see how it ends there's always wiki and google...No more wasting ten years of your life only for your OTPs to not work out or your favorite characters die.

Remember the Reasons Why You Loved it

After slogging through a show for years, where season after season the mistakes keep piling up, it's easy to forget why we originally loved it. Try to think back to a time when a storyline had a lot of potential or an episode gave you all the feels in the best ways before it went downhill. Revisiting the better aspects helps us lessen feelings that we wasted our time and reconnect with what we actually found enjoyable before.

If you're so frustrated, blog about your feelings. Record a video on YouTube. Or go to Tumblr. Sometimes when we critically pan a show, other fans think downright accuse and berate others about being negative nancys or looking for something to complain. But sometimes the obstacles we endure with a show has genuine merit. So don't hold in your feelings. Heck, just look at The Walking Dead part of my blog to know I have all kinds of rants (and raves) about it and every single one made me feel a little less frustrated.

Fans garner a bad wrap because we can be possessive and demanding. But fans also know characters, ships, and stories sometimes better than the writers do. Fanfiction can be an amazing portal into other ideas of a show that makes you wish that little corner of Archive Of Our Own or Fanfiction or Tumblr was real. The different imaginings help you heal the parts of your OTP that showrunners didn't have the guts to do themselves. I SEE YOU ONCE UPON A TIME. #SwanQueenForever Check out fanfiction and you might feel like your fandom lived up to its glory.

Honestly, I'm still working on this and probably always will. It's difficult to let a fandom go when it had so much potential. But, if we combine the previous suggestions above, we can move on from something that was never meant to be and accept that what happened happened. Ultimately, it will feel good to just let a fandom go and find other ones out there that are worth your time and energy.

Dear fandom,
Thanks for the memories.
Burn in hell.
Love you.
KBYEEEEEEE.
at November 09, 2018