5 (Real) Ideas to Fix the Oscars 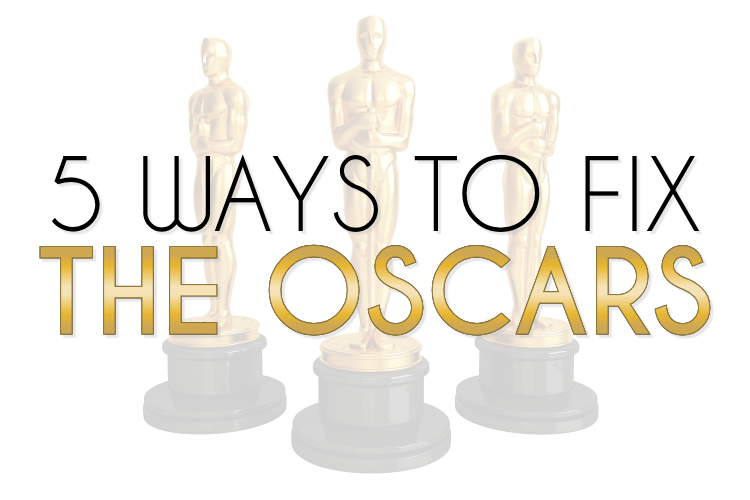 Award shows should be an exciting affair, and generally, they are for the people who they’re geared towards – Grammys ring in devoted music lovers, Tonys for the theatre crowd, Oscars for cinemaphiles, and so on. However, over the past several years  the Academy Awards has felt pressure to increase its ratings despite movie fans accepting the ceremony format (excluding the lack of diversity, of course) the way it is.

With making the Oscars more dynamic in mind, the Academy Awards's planned some big changes. Two, in particular, set fire to the film community: the show's running time will be limited to three hours period (by filming the technical winner's speeches during commercials and then aired as a montage). And, creating a new separate category for Popular Film instead of acknowledging blockbusters with other Best Picture nominees.

While their new ideas certainly had good intentions, it's not difficult to notice that the Oscars ceremony continues to gloss over its other mistakes. From forced comedy sketches to general pat-each-other-on-the-pack merriment, there's harmless flubs that makes it feel like we're watching the same ceremony over and over again; small reasons why the ratings continue to decline. So, how can the most anticipatory time of the year for movie buffs actually change for better? I have a few ideas. I'd love to know how you feel about the Oscars' announcements. Let me know in the comments!

Stop with the Shout-Outs

When was the last time a host opened the show without pointing to every nominee and leading the praise-worthy applause into a cringe-worthy joke at that person's expense?  I honestly can't remember. The shout-outs need to stop because they waste so much time. Yes, the industry's biggest stars are all in the same room together. It’s why the Oscars is known as the biggest night in filmmaking. If we wanted to see how long the guest list is for the Oscars we would look up the seating arrangement or watch the red carpet. Chances are we probably already watched the red carpet. There’s truly no need for the host to call-out everybody there just to say 'They’re here', and 'Omg, I can’t believe they’re here’.

Performances of the Best Original Song are fun, but to be honest, they also only work within a context of the movie, lifting up a character's journey and creating an emotional moment for the story. Forcing actors who are not singers to perform in front of millions of people, or listening to crickets from the audience as a performer's act goes on forever, does not have the same effect as it does in a movie. It’s rare to enjoy show-stopping numbers like Common and John Legend bringing the house down with Glory or Lady Gaga honoring The Sound of Music. So let's just leave the music sequences to the music award shows.

Helming the Oscars naturally comes with a host’s ambition to set a relaxing tone for the evening. And that’s awesome…but there’s got to be something better than forcing celebrities to interact with everyday people. More often than that, the presenters like Tiffany Haddish and Maya Rudolph can have a good time on their own. So why not let the actors get more creative with presenting or winning? Honestly, the only things we end up remembering are our personal favorites winning or that Moonlight won over La La Land. If the Oscars want to keep the ball rolling throughout the night, there doesn’t have to be over-the-top skits to prove celebrities are just like us eating girl scout cookies or not knowing what to do when unsuspecting fans suddenly invade the Kodak Theater. Unless, of course, the skit includes Ryan Gosling being the angel that he is. We can keep those.

Acknowledge Movies By Their Merits

The LGBTQ movie. The race movie. The women-centered movie. The historical epic. The quintessentially British movie. The heartbreaking dramedy. The indie. The 'it came out of nowhere' movie. The war movie. Everyone knows the Academy fills up the Best Picture nominations with a genre quota, yet it always looks down on blockbusters or genre films. It is a truth universally acknowledged that when autumn comes around, most movies are considered Oscar bait. However, movies released from January 1st to December 1st preceding the next ceremony are actually eligible to be nominated. If Hollywood spent less time feeling too comfortable on its pedestal to recognize blockbusters (comic book movies, action, comedies, dramas, etc) alongside artsy films, maybe the viewers that think the Oscars are too stuck-up won't rightfully feel snubbed.

There’s one thing the Oscars can’t control: how long it’s going to run. Despite its best attempts to be three hours long, it’s been struggling with its own limit since the 1980s to stay on track. It’s time to accept that the show will always run over or trim the fat (see above). Or maybe uphold their own rules to everyone. In 2010, the Oscars declared a 45 sec. limit for thank you speeches. However, as recently as the 2018 ceremony, costume designer Mark Bridges clocked in at 30 sec. while Frances McDormand and Gary Oldman gabbed for 3 to 4 minutes. Clearly, there's a discrepancy on who needs to rush through their moment and who doesn't. But jump backwards to 1965 when Bob Hope took twenty minutes to open the 37th Academy Awards, and the ceremony still managed to squeeze it all in at about two hours. Maybe the bigger winners have to be held to the same expectations: the crews deserve the same courtesy and recognition as Hollywood's biggest stars.
at August 11, 2018