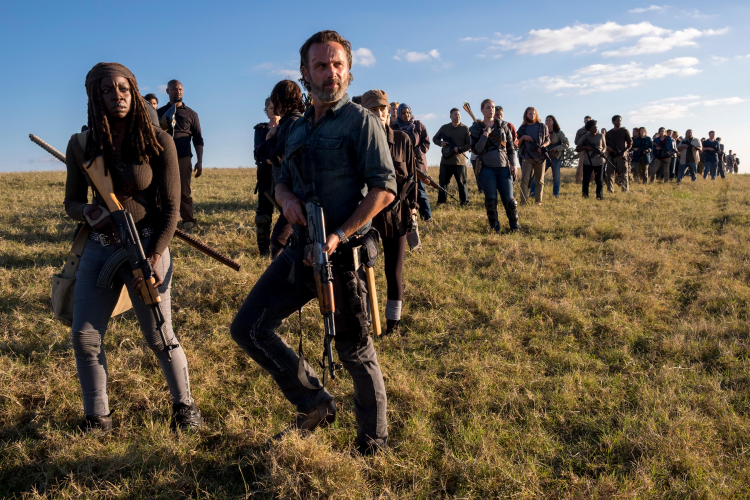 Nothing might be more defeating in a fandom than when something you love goes off the rails. Though The Walking Dead's ratings have been dropping for more than two seasons, and its direction has been panned by both fans and critics, the season eight finale was still majorly disappointing.

It's difficult to pinpoint where the popular series started spiraling out of control because every fan feels differently, and if you've been following my recaps, it's no secret when the show started letting me down. However, there just seemed to be no recovery of how expectations of the characters' future were shattered when one major cast member was unceremoniously killed off, and the show kept pile-driving a storyline home that nobody's wanted for multiple seasons. Which is why it took me so long to even approach writing a recap for the season eight finale. Honestly, I didn't know if I needed space from the latest cliffhanger or if I just stopped giving a damn. I just know here are 5 Reasons Why I Couldn't Take The Walking Dead's Season Eight Finale Seriously and Didn't Recap It. This post contains spoilers of season eight. You've been warned!

Nothing Happened in Episode Fifteen

Everyone was just sitting pretty at The Hilltop Colony while Rick and Morgan became the Mayors of Crazy Town towards some Saviors that escaped Maggie's compound. While Morgan's sanity  reached its breaking point for the millionth time, Rick struggled to keep his dead son's wish alive - let people who are truly sinister live...because hey, we're all human. And that's about it. Oh yeah, Rick read the completely out of character letter Carl left him while Michonne read the completely out of character  letter Carl left for Negan to Negan who didn't give two walker heads about what Carl wanted for the future. And Simon, the best most entertaining villain we've ever had, was killed....I forgot if anything else worth mentioning happened...

The Walking Dead has always had its share of filler episodes; basically moments where characters "realize" something about themselves as extras are slashed off left and right, or characters are just killed off for the sake of drama. So it wasn't a big surprise that season eight ended where it left off in a gratuitous show of how the characters came full circle. In the premiere, Maggie, Rick, and Ezekiel gave inciting speeches of how they will win against Negan no matter what, and then through a series of stupid writing mistakes, he was left alive again and again. Because you know, Negan and Carl have their intriguing storylines to act out now....

Okay, so Rick suddenly agrees with Carl that the guy who killed their friends, stole their weapons and food, treated people like cattle and sex slaves, tried to prove he'd make a better father to Rick's children through manipulation, power, and greed, suddenly deserves to live. Not only is it entirely ridiculous for Rick to not want justice against someone that they deserve to get justice from, but that his son who single-handedly saw how Negan treated everyone around him has a change of heart because he tripped and was bit by a walker?! This is where we leave Rick? In a series where the heroes focused on redeeming people who made no attempts to be redeemed in the name of a future where the villain would've done anything to have it all for himself by screwing over everyone else any way he could.  SERIOUSLY. Seriously?

As season eight came to a close, word had it that Lauren Cohan and her team were not happy with the salary deal AMC tried to make, which wasn't equal to Andrew Lincoln or Norman Reedus. Honestly, good for her in getting that dough because, as one of the biggest female characters, she deserves it.

But it didn't ease the gut-wrenching finale, where, similar to the premiere, our good guys faced off against Negan's guys. During the battle Eugene proved he isn't totally worthless by sabotaging the bullets Negan wanted him to make, and essentially got all of his people killed. Right when Rick had Negan in his sights, he basically just slashed his throat as Michonne held Maggie back screaming about justice for Glenn, Abraham, Spencer, Olivia, Ben, Sasha, all of Oceanside's men and boys, while everyone else just watched her double over from their betrayal. It's honestly hard to look at the rest of the heroes like Rick and Michonne the same way again when they're projecting their feelings onto Maggie who should get the justice she deserves. The episode's closing moments only became more exasperating when Michonne and Rick basically set Negan up in a shed motel "to be made an example of" for the rest of his life, while Maggie was painted as the villain for teaming up with Daryl and Jesus (who's suddenly not the pacifist he was throughout the season) to kill Negan.

With rumors of Lauren and Andrew leaving, it'll probably end up being a feud that never comes to fruition - so here's to so many unexplored storylines ahead.

It's the End of An Era

Who would've thought that the future would not belong to Chandler Riggs's Carl after everything the show has put the fanbase and his character through? Probably, nobody in a million years. On top of which, after rumors swirled around over Andrew Lincoln's eventual departure from the show, it was revealed that the upcoming ninth season would be his last. When you think of how the other initial castmates - Melissa McBride, Danai Gurrira, or Lauren Cohan - don't have a lot of time left, what's worth investing in the show? Especially when it's lost the dynamics of a family surviving the apocalypse, both the Grimes clan and everyone Rick has met along the way. If season eight taught us anything, it's that anyone can go for the sake of stupid twists. And, that's not cool. Carl's death was the beginning of the end. It's just time to say goodbye.
at June 16, 2018