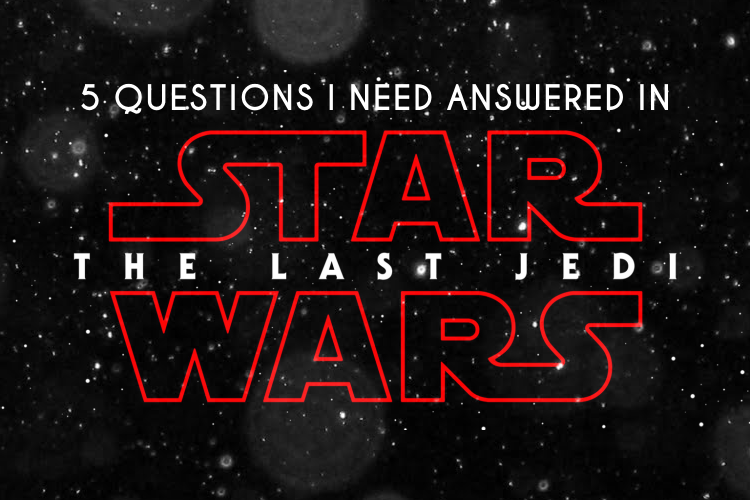 Who is General Snoke?

The Empire as we knew in Return of the Jedi effectively fell after the death of Chancellor Palpatine. Yet as The Force Awakens introduced new canon but didn't explain the timeline thoroughly, Supreme Leader Snoke was able to rise up from his holographic pedestal and demand the absolute best from his First Order fleets and his apprentice Kylo Ren. However, we don't know a whole about Snoke yet. Who is he other than a fly on the wall on Starkiller Base? How does he yield so much power? Snoke has a lot of explaining to do.

How will Rey's vision come true?

In the The Force Awakens, Rey becomes connected to the man, the myth, the legendary Jedi Luke Skywalker when his lightsaber calls to her on Takodana. She sees several different moments from her past and the future flash before her eyes. We assume the vision must be real because it shows how she was left behind as a child, and rightfully predicts the epic showdown she'd eventually have against Kylo Ren. But there are several distinct moments that have yet to take place such as a mysterious person placing their hand on R2D2, Kylo surrounded by his Knights of Ren and murdering someone in the rain, and Obi Wan's voice calling out Rey. Some of the moments were shown again briefly in The Last Jedi trailer, making me question how much stock we should put into characters' visions.

In probably the most epic entrance in Star Wars history, it takes about two hours for Skywalker to arrive on the scene in The Force Awakens. The entire film builds around his whereabouts, but all we're left until The Last Jedi are theories and a long stare between him and Rey. The Last Jedi trailer can only dole out so much hype and elude to so many details in two and a half minutes.

One moment that stands out distinctly is Skywalker's apparent reaction to Rey's ever-strengthening abilities with The Force. He describes having witnessed a raw power like hers before i.e. when he was training Kylo Ren. Skywalker says he was not scared of Ren's powers, so I have one big question: why not? The latter young Jedi-in-training ended up destroying Skywalker's new Jedi training academy and was swayed to the dark side by Snoke. One thing is clear: both Rey and Ren are dealing with identity crises and their connections to the force. What raw powers does Rey possess which makes Kylo pale in comparison?

You can't be a Star Wars fan, and not take a side about whether to love or hate Porgs. They're the absolute cutest with their little screamy faces and similiarities with puffins. Even though the Star Wars phenomenon has expanded into tv series and novelizations that cover anything you can imagine, we've never seen Porgs in their cinematic habitat before. So we have to wonder about the Porgs - where do they come from? What's their relationship to Chewbecca? Are they the new Ewoks?

How will the Skywalker Saga end?

This trilogy starring the next generation has only just begun, and we might be facing a final farewell to space royalty known as the Skywalker family. Director J.J. Abrams, who will take back the helm of the next installment, eyes an ending for the legendary clan, naturally raising some curiosity about the future.

But mapping out their fate will be more complicated than merely writing the final curtain call for General Leia Organa and her brother Luke. Since Carrie Fisher's unexpected passing last year, and actor Mark Hammil already stating the ninth film was to be centered around Fisher, fans and critics are worried about how their, and her story in particular, will conclude. We hope it's a justified send-off for this Princess turned General. If Abrams plans pan out, The Last Jedi has to naturally start the process of ending these characters' stories, leaving me to question how will this saga end.

What questions do you most want answered in The Last Jedi? Feel free to let me know in the comments!
at December 14, 2017