5 Outbursts I've (Accidentally) Made at The Movies 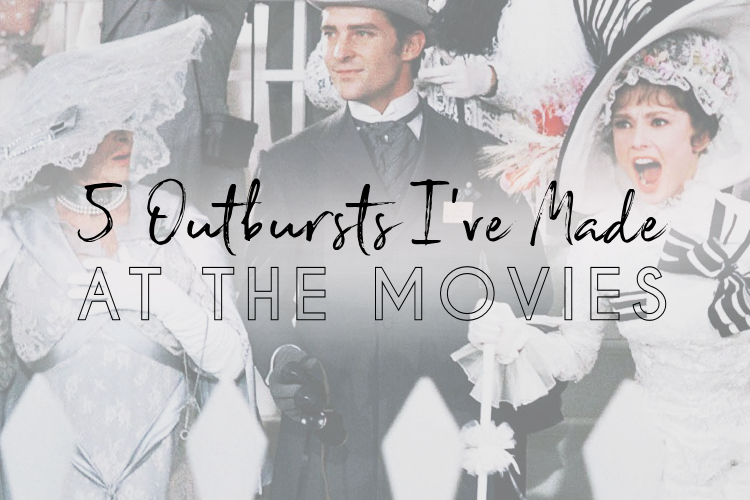 Sometimes a movie is so good or bad, everyone gets a little caught up in what's going on. Especially if we're seeing something for the first time at the theater, we get frustrated, scared, or excited about what's going on. While I'm usually pretty respectful not to cause any kind of disturbance, there's actually been a few times where I went into Eliza Doolittle mood. Here are five times I've made outbursts at the movies. (Sorry!) Maybe I'm not the only who's done the same? Have you ever been so excited or angry you've made a big reaction? Feel free to share in the comments.

Before my love of Captain America, only two superheroes occupied my fangirl heart Batman and Wonder Woman. As a teen growing up, Christopher Nolan's franchise starring my favorite actor Christian Bale was a dream come true. The Dark Knight Rises was so huge, not just because of the mega-cast but thinking it'd be the last Batman movie. To see the final entry of his trilogy, my sister and I attended a sold-out showing of a marathon screening all three films. For six hours I feared Bruce Wayne's death and was so mad when it seemed like he was going to die. What else could a girl do but yell "Batman can't die!" and then turn to my sister to whisper, "What the ***?" when he turned out alive and happy. Some other people hollered, so I didn't feel entirely alone.... *sigh of relief*

War of the Worlds

One summer, my family decided to go to a drive-in theatre set on top of a hill in the middle of nowhere. There wasn't a lot of nearby traffic to distract you, so anything can make you feel on edge. A double feature of Bad News Bears and War of the Worlds seemed like a good combination - the first made us laugh, the second scared the pants off of everyone. Well, at least me. When the aliens arrive to destroy the world, a huge cello-like sound billows out. Soooo, at a pivotal moment of the movie when a loud roaring noise came out of nowhere under the absolute cover of darkness just as the alien pods ascended on-screen, I screamed, "OMG, ARE THEY HERE?!" Ummm, nope. Just a motorcyclist rolling by.

I don't remember how my mom forced me to see Spirit: Stallion of the Cimarron. I can't say if it's a bad movie or not, just that it was really annoying and I'm pretty sure I wanted to see a superhero movie instead. That said, the story revolves around a poor horse who just wants freedom, but again and again and again, men capture Spirit to break him down as Matt Damon's narration drawls on and on. It was a recipe for disaster. About an hour into the movie, I remember yelling, "OMG, leave the damn horse alone!" Even though it's a children's flick, there weren't any families around. So no harm, no foul this time!

Pirates of the Carribean: The Black Pearl

Oh, the days when Pirates was so, so good. Surprisingly, when we went to see the first installment, nobody was at the theater even on a matinee during the weekend. So I didn't feel too bad at the end screaming "Noooooo!" when it looked like Captain Barbossa stabbed Jack Sparrow. Of course, Jack's got literal lifesavers up his sleeve so everything was cool. But given the recent string of failed sequels, should we have just said bon voyage a long time ago?....

For the Pirates of the Carribean sequel, the atmosphere was completely different. This theater was sold-out. Like, it was so crowded some people almost started sitting on the stairs (which at the time nobody cared was a potential fire hazard or anything). Well, halfway through Jack's second round of adventures, I'm pretty sure I blacked out. The story was just okay, but nothing grabbed my attention. When a mysterious pair of boots showed up before the big reveal, that CAPTAIN BARBOSSA WAS BACK, I lept up from my chair, "YES, BARBOSSA'S BACK, YESSSS!" I pretty much woke up everyone else who started cheering too. *takes a bow* I'll be here all weekend, folks.
at August 09, 2017