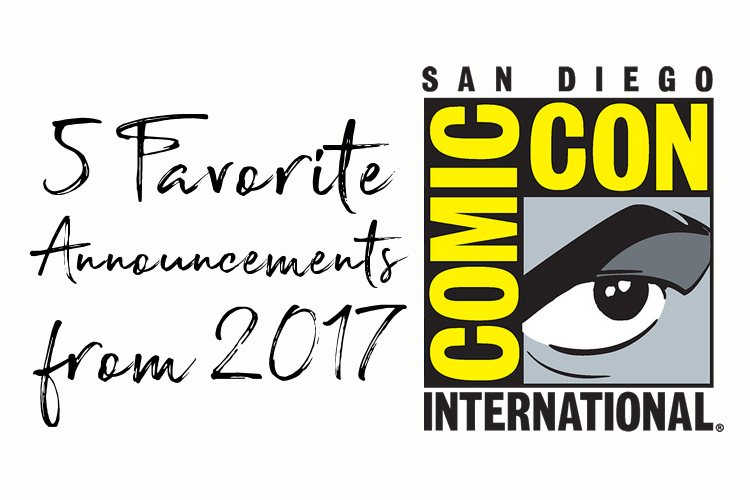 The geekiest weekend on the calendar known as San Diego Comic Con has come and gone. Fandom across the galaxies and comic book universes was lit as studios delivered sneak peaks for some of the most anticipated movies and tv shows. There was so much to look out for and get excited about for the next year (or more). These were my five favorite announcements from SDCC. What trailers or teasers excited you the most? Feel free to share in the comments!

"Humans, Orcs, Elves... everybody is just trying to get along. Get ready for the world of Bright", seems to be a wild new movie ready to drop on Netflix in November.

*By the director of Suicide Squad* I'm out.
*stars Will Smith* YAAASSSSSS.

I went from mildly disinterested to LET'S DO THIS in about five seconds.

Four of Marvel's biggest misfits are coming together to stop a villainous sect from destroying NYC. Jessica Jones, Daredevil, Luke Cage, and Iron Fist are facing off against the sci-fi queen herself Sigourney Weaver. Sign me up! We're also finally seeing the Punisher in his full costume, sparking even more excitement for Jon Bernthal's first season as the anti-hero Frank Castle.

Netflix promised the next descent into the upside down would be bigger and more bad-ass than ever before. The thrilling new trailer for season two definitely proved that. There's even more eighties nostalgia as everyone deals with opening the curiosity door. I know where I'll be this Halloween!

So this is what a Marvel movie on crack looks like! The Hulk and Thor duel in gladiatorial games while trying to stop Hela ( goddess of death played by queen Cate Blanchett) from destroying Asgard. Oh, and Jeff Goldblum 'cause why not.

When the trailer above dropped a few months ago for Black Panther's solo flick, I was already stoked. At San Diego Comic Con, Marvel released a trailer with new footage which sparked an adorable, ecstatic reaction from the cast and a standing ovation from the fans in attendance. It's said to be one of the craziest best reactions for a first-reveal. I can't wait to see it eventually. February 2018 can't come soon enough!
at July 28, 2017